Jeffrey Lurie, rightfully or wrongfully, feels responsible for Doug Pederson's success and thinks the team can replicate it 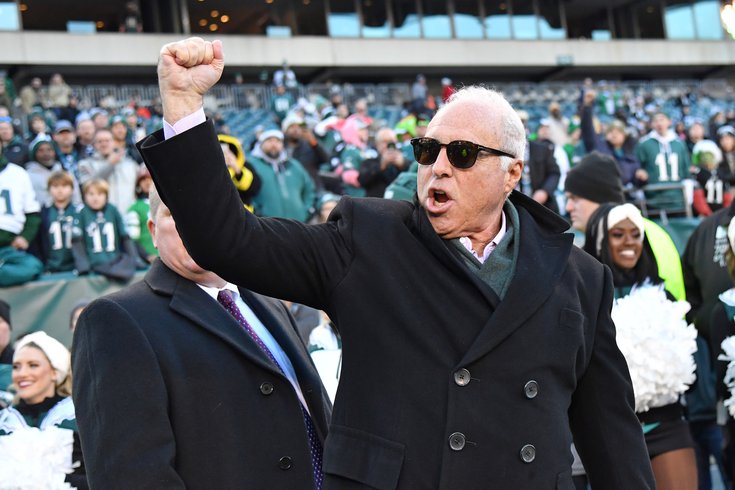 For over 40 minutes Monday, Jeffrey Lurie hemmed and hawed trying to explain the inexplicable from South Florida, a breathtaking account of why the Eagles owner decided to fire the only Super Bowl-winning coach his franchise has ever known less than three calendar years off that very Lombardi Trophy.

Ostensibly, the reasoning, was because Doug Pederson wanted to try to win in 2021 and that didn't match the organization's vision of a "transition."

If the Eagles owner didn't have a Ph.D. in contradiction previously he's surely got an honorary one after what amounted to a rambling, often incoherent dissertation

"It's a transition point and we've got to get younger and we have to have a lot more volume of draft picks and we have to accumulate as much talent as we possibly can that is going to work in the long run with a focus on the mid-term and the long term and not on how to maximize 2021," Lurie assessed. "And it's almost not fair to Doug, because his vision has to be: what can I do to fix this right away and what coaches can I have that can help me get to a smoother 2021?"

The guy who can literally define what's fair or unfair to Pederson in any way he likes hopes you miss out on that rather obvious point.

In even simpler terms, Pederson, or any other coach the Eagles hire for that matter, is only coaching for his job if Lurie says so and if that's going to cloud the vision of the organization why not take the shortest distance between two points and remove the hurdle by informing the head coach that the issues are understood, he's under contract for two more seasons, and there is no need to be ultra-sensitive over the next 12 months?

The answer to that is because "vision" wasn't the irreconcilable differences in this divorce, autonomy was. Pederson thought he earned the right to assemble his own coaching staff and the schism that started a year ago when Lurie forced Mike Groh out was rearing its ugly head again in the form of Pederson's protege Press Taylor.

If Lurie actually sat down to pen the transcription of his "Fire Doug Opus," it would have almost surely have been labeled a manifesto by many, a synonym for unhinged in the modern world whether it's something truly troubling like the Unabomber's rantings on Industrial Society or the more light-hearted fare of a Sam Hinkie resignation letter.

At this point, though, Lurie has taken more hits than a punch-drunk prizefighter so the goal here is to shift gears because the Eagles are moving forward no matter how poor the decision was to fire Pederson.

The march toward the Eagles' next head coach started out with a whimper with the Eagles' using the same groupthink interview list as every other downtrodden organization with names like San Francisco defensive coordinator Robert Saleh, Tennessee offensive coordinator Arthur Smith, Tampa Bay DC Todd Bowles, and Carolina OC Joe Brady being approached for get-togethers, the last of that group being the first to officially interview Wednesday.

Saleh, meanwhile, was headed down to Palm Beach Wednesday after failing to hammer out a deal with Joe Douglas and the New York Jets after a second interview.

The first call in the search was actually made to Howie Roseman-confidante Lincoln Riley but $6.5 million at Oklahoma and options for a Matt Rhule-like setup down the line trumps friendship for Riley. The college ranks have also proven to be fertile ground for flirting with Ryan Day of Ohio State and Luck Fickell of Cincinnati also getting at least lip service.

Jerod Mayo, the 34-year-old Patriots wunderkind, was the one out of the box candidate early in the process and likely more of a signal to the possible defensive coordinator Lurie wanted Pederson to hire and perhaps an arranged marriage for the next head coach.

To be fair to Lurie this will be the fifth head coach under his watch and the previous four have been successful when measured against the context of the rest of the league. The overt home runs, of course, were Andy Reid, a surefire future Hall of Fame coach and arguably the second-best mentor of his generation, and Pederson, the only man to lead this franchise to a Super Bowl championship. Ray Rhodes and Chip Kelly each reached the playoffs during their tenures (Rhodes even won coach of the year in 1995).

Compared to many other organizations that are constantly spinning their wheels, that's just not a passing grade that's an A-plus for Lurie.

This brings us full circle to the contradiction theme.

As ludicrous as it is for an NFL team to essentially say 'hey we liked great players, they just got taken before us,' forget about that and focus on Lurie's prized process — a word by the way that should be de-platformed by Big Tech when it comes to Philadelphia sports.

Lurie knows how the sausage is made and realizes his scouts and Roseman wanted Justin Jefferson while Pederson and Co. pushed for Jalen Reagor in the 2020 draft. That's a really fair point so how about those pesky details of the process in 2016 when Lurie and Roseman wanting Adam Gase and Ben McAdoo before settling for Pederson?

With the benefit of hindsight what we learned about that 2016 process is that the Eagles never really wanted Pederson and never trusted him even after he delivered the ultimate prize but the organization got lucky.

From there, the decision-makers awarded themselves with gold stars.

Bliss with Lurie's Philadelphia Eagles is about targeted contradiction, the kind that will allow the owner and Roseman to enjoy the spoils of their deposed coach's tenure for very good reason, they've convinced themselves they are responsible for it.