Reid established a winning culture in Philly and then handed the Birds Doug Pederson. Maybe Lurie never should've stopped listening to him... 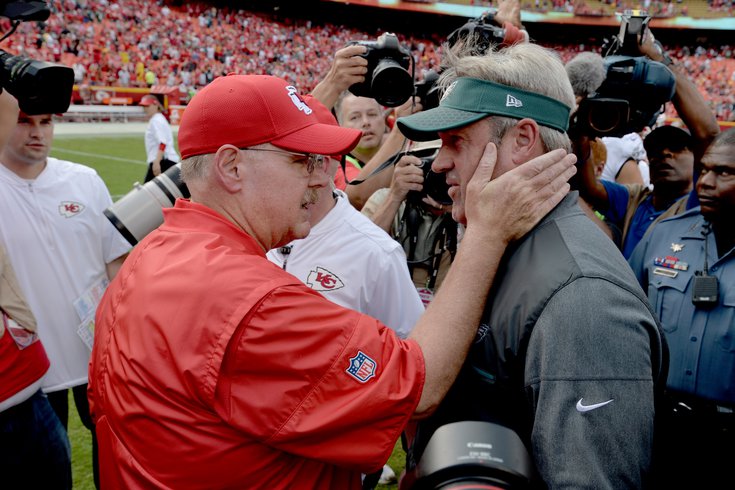 If the Eagles' coaching search feels a bit schizophrenic to you, you're hardly on an island and certainly not on Palm Beach Island, where Jeffrey Lurie and his search committee have migrated in an effort to find the successor to Doug Pederson.

Maybe the two New England candidates who interviewed this weekend explain the lack of consistency in Philadelphia’s "targets" best.

You had the 34-year-old Jerod Mayo, who could probably still suit up for the Patriots in an emergency circumstance, getting his first-ever head-coaching interview after only his second campaign as a professional coach on Friday, and Josh McDaniels, old reliable on the hiring circuit, finishing up the weekend with his 12th known meet-and-greet since 2015, one of which was McDaniels' "Runaway Bride" episode in Indianapolis that led to Frank Reich being the consolation prize for the Colts.

Just when you zig and think Lurie is looking for a first-time head coach who will not push on autonomy issues like Mayo, he zags and talks to McDaniels, who is recruiting assistant coaches in advance of a potential move down to Philadelphia.

So what is really going on here?

Even Joe Banner, the former Eagles' president, and Lurie's childhood friend, concedes that the Philadelphia job is not viewed as an attractive position for those with options right now like Robert Saleh and Arthur Smith, who took Lurie's hospitality in return for a few public relations points garnered by the Eagles, before securing deals with the New York Jets and Atlanta Falcons, respectively.

So maybe the end game is the best of the rest: either the young, unproven kids with upside like Joe Brady, Kellen Moore and Mike Kafka, the more plug-and-play types who've scared others off for whatever reason, names like McDaniels and Eric Bieniemy, or the status quo in Duce Staley.

The litmus tests are many for the Eagles with the coaching staff, say in personnel, acceptance of an analytics-based approach, and now a favorable view of Carson Wentz being fixed — all things that are surely coming up in what sources close to Mayo said was about a 10-person grilling.

From @NFLGameDay: The #Eagles are interviewing #Patriots OC Josh McDaniels today, have a request in for #Chiefs OC Eric Bieniemy... and have told candidates they believe Carson Wentz is fixable. pic.twitter.com/3s5SaPGN1o

But who's actually asking the questions: the committee spearheaded by Lurie, general manager Howie Roseman, and team president Don Smolenski or the candidates worried about all those ground rules?

The cliche question in any job interview is "where do you see yourself in five years?"

The Eagles almost have to hope their ever-burgeoning list of potential head-coaching candidates actually don't ponder that kind of query too seriously.

After all, the autopsy on Pederson's tenure in town highlights the fact you can reach heights never seen before in the franchise's history and still be planning a trip home in five years.

As for where the Eagles ultimately end up, that's actually the simplest part for Lurie — just call Andy Reid and ask.

At 62, Reid remains the most innovative, creative, and now aggressive offensive coach in the NFL after he willed the Kansas City Chiefs to another AFC Championship Game without a concussed Patrick Mahomes.

After 14 years of installing a winning program in Philadelphia and then handing the Eagles Pederson, it’s pretty clear Lurie should have never stopped listening to Reid in the first place.