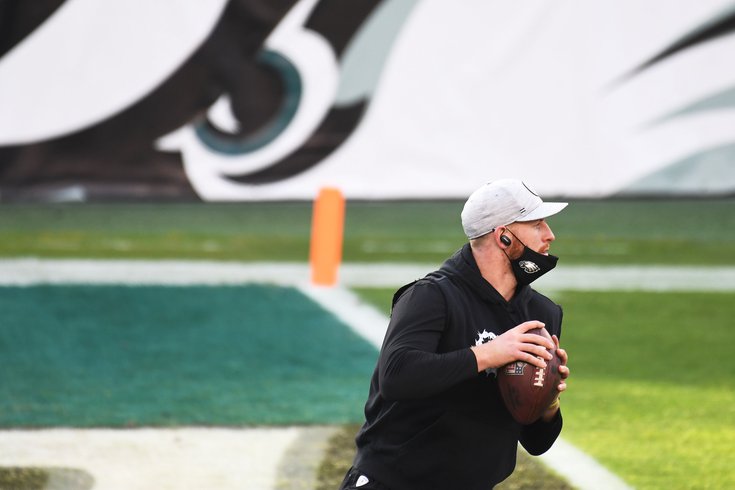 The Philadelphia Eagles coaching search is expected to heat up considerably this week as several coaches still in the playoffs could be eliminated and, in turn, become available to fly down to Florida and meet with owner Jeffrey Lurie. That's good, because the Eagles were already behind the proverbial eight ball with their decision to fire Doug Pederson coming more than a week after the season ended — and more than a month after some other teams fired their coaches.

We've been keeping track of the team's extensive coaching search — there are over a dozen candidates currently — and will continue to do so, but we thought now was as good a time as any to take a step back and look at some of the bigger picture issues as the team appears to be closing in on their choice for its next head coach.

On Saturday, we broke down Jeff McLane's in-depth story on Carson Wentz and the current dysfunction at the top of the organization. A day later, Wentz remains a big theme of the Eagles coaching search — a quarterback making north of $30 million dollars is always going to be — with news coming out that the Birds are telling candidates that they'd prefer trying to fix Wentz over the alternative (handing things over to Jalen Hurts or drafting a QB with the sixth pick in this year's draft).

From @gmfb Weekend on the #Eagles maintaining during head coaching interviews they want Carson Wentz back next season. pic.twitter.com/1p4e5TO1QQ

Given all the reports that have come out in the past (dating as far back as two years ago right up through Saturday), it wouldn't be shocking if some candidates had second thoughts about hitching their wagon to Wentz. For starters, he was god awful in 2020 and it's going to be hard to get him to fix his issues if, as McLane reported, he not only refuses to see himself as a part of the problem but also doesn't accept any coaching.

There's also the stuff about him getting into "pissing matches" with Pederson over the play calls and "going rogue" out on the field. None of that seems very appealing to any head coaching candidates. But the Eagles seem committed to making it work nonetheless.

As this is a What They're Saying and not a What Matt's Saying, let's dive right in to our roundup of the latest Eagles news...

According to Mike Florio, the Eagles' searching coach is nearing an end and could be wrapped up this week. But, like many others, he's quick to note that the Wentz situation is going to loom large over the remainder of the process. And given everything that's been reported about him, are we sure that's the best idea? Even if it's not all as bad as some have said, perhaps it would still be best for a fresh start for both sides.

The Eagles don't appear to think that's the case...

The Eagles got a late start on looking for a new coach. It’s unclear when they’ll finish the process. What is clear is that the new coach will need to have a clear plan in place for handling the quarterback position.

Common sense suggests that the job will go to a coach with an offensive background, given the importance of fixing fallen (for now) franchise quarterback Carson Wentz. But the Eagles haven’t ruled out a defensive specialist; indeed, maybe one fewer offensive cook will make it easier for Wentz to coexist in the kitchen.

The Wentz dynamic remains the most important aspect of the present and future of the team.  [profootballtalk.com]

Is this the worst job opening?

Joe Banner knows a thing or two about the inner-workings of the Eagles organization, specifically when it comes to owner Jeffrey Lurie. He thinks, as some others do as well, that the Birds are the least desirable landing spot for potential coaches. And it goes beyond the quarterback controversy or the bad cap situation or the aging roster — all things he pointed out in his recent Q&A with Paul Domowitch.

There's been a ton of talk about coaches being hesitant for those reasons, but the biggest concern might have to do with how management and ownership appears to have become increasingly meddlesome. And as much as the organization will want the candidates to outline how they're going to fix Wentz, the candidates should be asking the organization how involved they'll be in business.

I can’t imagine any coach who has read the stories, including the ones about front-office influence on the coaches Doug could or couldn’t fire or keep, wouldn’t have concerns. It certainly will be a topic of conversation from the agent who initially will get the call to the actual applicant. He’ll certainly pursue that and make sure that he feels he has the control and authority to be successful.

They’ll have to answer that question to the satisfaction of these candidates. A coach will not look kindly on management feeling they know better who the coaches should be than the coach himself. That’s a concern the Eagles will have to speak to and make the coach comfortable. Or it could be what makes him choose someplace else other than Philadelphia if he has options.  [inquirer.com]

While the Eagles' job initially appeared as the least desirable option, that might no longer be the case. Thanks, Houston!

There’s been some talk in recent days of the Eagles having the most undesirable coaching vacancy remaining around the NFL.

According to Adam Schefter, the Eagles could be moving up the desirability list for certain candidates, thanks to the Houston Texans’ treatment of Deshaun Watson during their hiring process.

There is a growing sense from people in and around the Texans’ organization that Deshaun Watson has played his last snap for the team. It’s early in the off-season, there’s a lot of time left, but Watson’s feelings cannot and should not be underestimated.

[...] Now thanks to Cal McNair, the Eagles could be looking at their choice of Joe Brady, Duce Staley, Eric Bienimey, Jerod Mayo, or Brandon Staley.  [sports.yahoo.com]

News came out over the weekend that the Eagles would interview Eric Bieniemy once the Chiefs were eliminated from the postseason, and according to Fowler and Graziano, they might be the only realistic landing spot for him, which is somewhat shocking after he entered the offseason as one of the hottest names on the market.

But there's also some interesting info in here regarding some other candidates for the Eagles' opening, like Joe Brady, Brandon Staley and even Lincoln Riley.

With three head-coaching jobs officially filled, there's a growing belief that Chiefs offensive coordinator Eric Bieniemy, who'd been thought to be the most obvious candidate to get a job this cycle, could be shut out again. It doesn't sound as if he's the guy in Detroit. We know Houston angered its franchise quarterback by not interviewing Bienemy during Kansas City's bye week. (The Texans now can't interview him until after the Chiefs' season ends.) It's possible he's in the mix for the Chargers job, but there's also a lot of buzz about Bills offensive coordinator Brian Daboll for that job.

So that would leave the Eagles, and while the organization's strong relationship with former coach Andy Reid is likely to draw a strong recommendation, Philadelphia already is eyeing other candidates. Sources say Brady and Rams defensive coordinator Brandon Staley are both on the Eagles' list. And while many believe it might be too soon for those first-time offensive coordinators to ascend to head-coaching jobs, the Eagles are of the mind that it's better to grab a guy a year too early than a year too late if you believe in him.

One other note on the Eagles: Don't ignore the Lincoln Riley chatter. We have been told that team owner Jeffrey Lurie is a big fan of Riley's and remains very interested in trying to lure him away from Oklahoma into the pros. What we don't know is whether Riley is seriously interested.  [espn.com]

It's worth noting that Paul Domowitch has reported that Riley "seems content to stay where he's at for now." But that could always just be a part of the negotiation dance.

There was a report on Saturday that the Seahawks were interested in Doug Pederson to be their next offensive coordinator, but that doesn't seem like it'll happen. According to Jason La Canfora, the former Eagles coach plans to take the year off in 2021.

Eagles Super Bowl-winning coach Doug Pederson is unlikely to coach in the NFL in 2021 in any capacity at this point, league sources said. Several teams are interested in Pederson for offensive coordinator positions, but the timing is not right.

Pederson was let go from the Eagles a week after the season ended, with most teams already fairly deep in their head coach searches, and it's quite possible that -- pending the results of this weekend's playoff games -- the Eagles' vacancy is the only one remaining by Tuesday. Most other teams are fairly locked in on their choices and it is not uncommon for successful coaches to take a year off before launching back into the head coaching hiring cycle the following year (like Mike McCarthy did after ending his long stint in Green Bay).

Pederson has been contacted by several teams, sources said, including one that did have head coaching interest, but at this point he has no interviews scheduled. Teams have reached out about other roles as well, but getting the right fit with the right staff would be difficult, and it would be surprising if a coordinator role that suited him came along.  [cbssports.com]

Getting paid to stay home and spend time with your family, while also avoiding the utter dysfunction that is the Eagles organization? I think it's safe to say Pederson is the big winner in all of this.