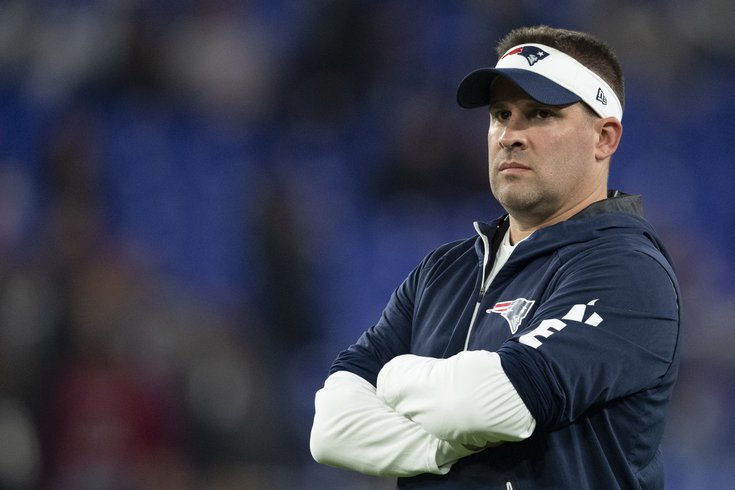 The Philadelphia Eagles will interview New England Patriots offensive coordinator Josh McDaniels on Sunday, according to a report from Bo Wulf and Zac Jackson of The Athletic.

Reporting with @AkronJackson: Patriots OC Josh McDaniels is a candidate for the Eagles' head coaching job and is set to interview with Jeffrey Lurie in Florida. https://t.co/nhGTT0HQDg

After finding success as the Patriots' offensive coordinator, McDaniels' first head coaching opportunity came via the Denver Broncos, when he was only 32 years old. After a strong start (on the field, anyway), it all went downhill fast. His head coaching career got off to a 6-0 start in 2009, but the Broncos went 2-8 the rest of the season. In 2010, Denver started out with a 3-9 record, and McDaniels was fired after Week 13.

McDaniels ruled with an iron fist, and his tenure with the Broncos was turbulent from start to finish, with some of the gory details memorialized in this article in the Denver Post after his firing. He immediately clashed with a number players, most notably starting quarterback Jay Cutler, who was traded for Kyle Orton and draft picks. He also reportedly did not get along with some assistant coaches, including defensive coordinator Mike Nolan, who left after one season with McDaniels.

McDaniels' roster decisions were often harshly criticized. He drafted Tim Tebow in the first round of the 2010 NFL Draft, and in addition to shipping Cutler out of town, he traded away popular players like WR Brandon Marshall, RB Peyton Hillis, and TE Tony Scheffler.

The final straw McDaniels' reign was likely when the Broncos were caught videotaping a 49ers practice in advance of a matchup in London. McDaniels brazenly dismissed the incident, and unlike the Patriots, the Broncos took appropriate measures to condemn cheating within their organization.

After his firing, McDaniels coached for one year in St. Louis before heading back to the Pats, where he has been their offensive coordinator for the last nine years. McDaniels' coaching history, via Wikipedia:

Of course, along the way, McDaniels agreed to become the head coach of the Indianapolis Colts, before infamously leaving them at the altar.

The Colts were so far down the road with the McDaniels hire they'd already hired three of his assistant coaches, including defensive coordinator Matt Eberflus -- all three are expected to remain on staff if they choose -- and made plans to interview others. They'd scheduled a press conference for Wednesday afternoon at Lucas Oil Stadium. Now the Colts must turn their attention to rebooting a search process that effectively ended three weeks ago when they locked on to McDaniels as their guy.

McDaniels has had a lot of success in New England, though obviously, Tom Brady and Bill Belichick had something to do with that. His career offensive rankings as a head coach or offensive coordinator:

Jeffrey Lurie noted during his press conference last Monday that he criticized former Eagles defensive coordinator Jim Schwartz after the Eagles' win over the Patriots in the Super Bowl, because the defense was mostly overmatched that day against the Patriots' offense.

"My message to Jim Schwartz after we won the Super Bowl was, ‘Wow, that was not a good defensive performance in that game. It was great against the Vikings and Falcons,’" Lurie said.

Perhaps Lurie was impressed by New England's game plan in that matchup. Also, if the Eagles are looking to rattle the cages of their players, who may have become accustomed to a player-friendly approach taken by Doug Pederson and the majority of his assistants, then McDaniels would be a coach who is not afraid to do that kind of dirty work.

But obviously, he comes with more than his share of major red flags.