John McMullen: Eagles' dysfunction can be traced back to Jeffrey Lurie 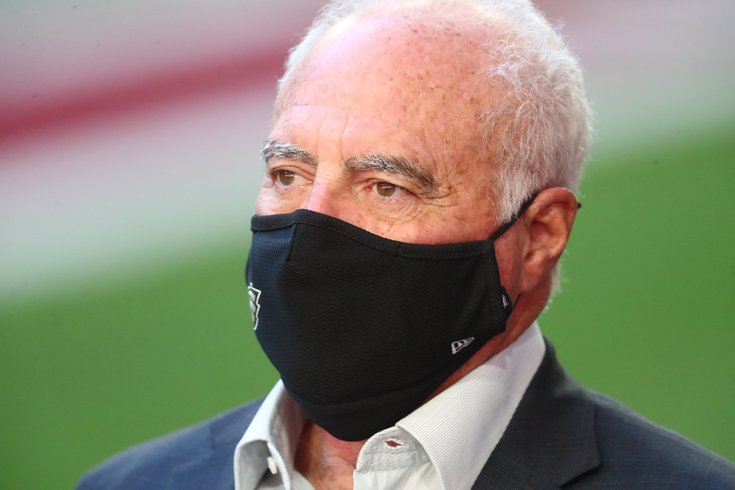 For most of the Eagles' fan base, blame for a 4-11-1 disaster of a season should be doled out in a circular firing squad between Howie Roseman, Doug Pederson, and Carson Wentz.

The real culprit in going from zero to dysfunction in 36 short months for Philadelphia stands off to the side, however, in the form of team owner Jeffrey Lurie.

Once regarded as a patient and tempered hand, Lurie and his organization finally got what they were searching for since 1960 on a cold's winter night in Minneapolis back in 2018, yet the man who piloted the Eagles to the Lombardi Trophy was forced to fire his offensive coordinator inside of 24 months and three consecutive postseason berths.

So, maybe it's no surprise that Pederson has to jump through hoops in Florida this week to keep a job he probably shouldn't even want by this point.

The coach could be fired if "Lurie is not confident about Pederson’s vision going forward after the two meet again soon,” an ESPN report claimed on Sunday.

How Pederson could possibly be confident in this organization to move forward is probably the more compelling question.

Lurie and Pederson met on Tuesday of last week, two days after the Eagles season ended in their worst record in eight seasons and one of the three worst marks in Lurie's quarter century-plus run in Philadelphia. Worse yet, it also came in the midst of an embarrassing tanking controversy which also points to the top of the flow chart at the NovaCare Complex.

And if you doubt the latter point, ask yourself why a coach with no personnel power would give a rat's ass about moving up from No. 9 in April's draft to No. 6 at the expense of his own locker room had he not been ordered to do so.

Lurie should have been offering the mea culpas at last week’s meeting for not only hanging Pederson out to dry time and time again when it comes to messaging, but also forcing him to move on from Mike Groh and into the failed Rich Scangarello experiment at the owner’s demand. The meeting did not go well, however, according to sources.

When it comes to experience, Lurie is Benjamin Button-ing his understanding of the NFL. He knew what he didn't know during Andy Reid's tenure, but the relationship with Chip Kelly, especially the last season in that failed regime, seems to have broken Lurie with his personal new normal defined as meddling.

Today, the Eagles' owner is basically Jerry Jones minus the personality, or Daniel Snyder absent the scandals.

So let's play a game Pederson himself doesn't like — hypotheticals.

Imagine Pederson arrives in Palm Beach this week with a plan that says Press Taylor is the offensive coordinator and Matt Burke the DC with the big ask, eat $34 million in already sunken cost for an unsalvageable Wentz coming off a pandemic year where revenues are down over $200M.

At that point, the coach is shown the door for having no sense of urgency, and Lurie and Roseman are left to their own devices for the third time inside a decade, the same ones that led them to Kelly and thinking Adam Gase and Ben McAdoo would have made better head coaches than Pederson.

More so, Lurie and his lieutenant are behind the current hiring cycle and despite the owner's need to be defined as innovative, the choice will come from the same tired list everyone else is using.

In that kind of circumstance, what are the odds of any high-profile coaching candidate with options choosing the Eagles after seeing what's going on with a guy who won the Super Bowl less than three years ago in a gig with one demand — do what you're told.

From there you can add in the dearth of talent, the QB controversy, and the salary-cap issues Lurie allowed Roseman to ferment.

The Eagles are a mess and if you type “blame” into the GPS, even the detours all lead back to Lurie.