Mailbag: If fans made the Eagles' draft picks, would they be better off? 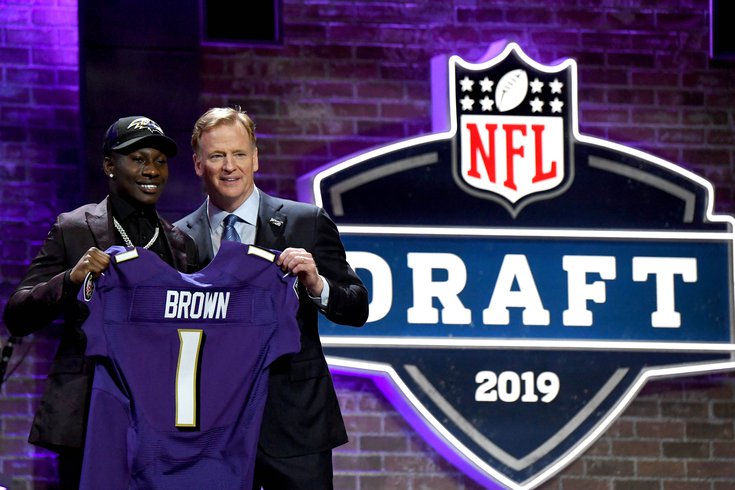 Marquise Brown would have been a better pick than Andre Dillard.

Question from Fan in Europe: What would the Eagles look like if they had just drafted the consensus first round pick for the last, say, 10 years? I know Carson would still be with us.

Ooh, I like this one. In fact, I liked it so much that I even crowd-sourced it to a bunch of friends to see if they agreed with my recollection of who the fans would have preferred in the first round (or with their first pick if they didn't pick in the first round).

• 2011: They picked Danny Watkins. The fans would have liked Jimmy Smith. Edge: Fans.

• 2013: They picked Lane Johnson. They fans would have liked Dion Jordan (as would have the Eagles), but that didn't happen. After missing on Jordan, I think the fans were fine with Johnson. Edge: Draw.

• 2014: They picked Marcus Smith after missing on six players they were targeting. That group included Anthony Barr, Odell Beckham, Kyle Fuller, C.J. Mosley, Brandin Cooks, and Ha Ha Clinton-Dix. I recall a number of fans liking Deone Bucannon, but I feel like Kelvin Benjamin was the most popular player they passed on. Edge: Fans.

• 2015: They picked Nelson Agholor. The fans would have liked Byron Jones. Edge: Fans.

• 2016: They traded up for Carson Wentz. I think the fans were mostly fine with that. Edge: Draw.

• 2017: They picked Derek Barnett, and while I believe that Barnett was a popular possibility before the start of the draft (as was Marlon Humphrey), when Jonathan Allen (a presumed top 10 pick) fell, most fans would have taken him at 14 instead of Barnett. Edge: Fans.

• 2018: They traded out and took Dallas Goedert. The fans would have liked Derrius Guice. Edge: Eagles.

• 2019: They took Andre Dillard. The fans would have liked Marquise Brown. Edge: Fans.

• 2020: They took Jalen Reagor. The fans would have preferred that the team pay whatever to trade up for CeeDee Lamb, but begrudgingly would have taken Justin Jefferson over Reagor. Edge: Fans.

Question from Shablagoo: Do you think the Eagles' cap situation and bad roster played a role in Lurie not cleaning house considering that all the other openings are looking to be more interesting for potential head coaches and general managers?

If you're a prospective GM hire and you're afforded the time it will take to tear the roster down completely, and then rebuild from scratch, you would have a fair amount of long-term job security right off the bat. In that sense, it's actually an appealing job, in my view.

However, I do not think the head coaching job is appealing, at all. It's a great city to coach in when you win, but I think we saw Doug Pederson age a few years in 2020 answering tough questions four times per week for a franchise that failed at a lot of levels beyond the coaching staff, and there's likely a lot of losing that lies ahead.

We talked about this a bit on the podcast, but the great Darley Sarley proposed your "Make them smoke the whole pack this year" theory, and then replace them next year. I agree that it makes sense to some degree, but I don't think that's what they're doing. I think it's a little more simple. Jeffrey Lurie just values Howie Roseman more anyone else does.

Question from Me (not "me" as in Jimmy, to be clear): Jimmy, the Eagles were being turned down by nobodies last year for the OC job. That was under much better circumstances. Now they are a very bad team, no reliable QB, a head coach on the hot seat, and the same weasel GM who seems bulletproof. Any reason to believe the search this year will go better? Do you think the Eagles think it will go better, or are they just flailing like it appears from the outside?

Lol, jeez. I guess we'll cover the appeal of the Eagles' offensive and defensive coordinator openings, too.

The offensive coordinator job is not at all appealing, for all the reasons you noted above, but also because you'd be hitching yourself to this fire-engulfed wagon, and likely not even getting to call plays.

Question from Mike: Did you see the report From ProFootballTalk that mentioned a head coach possibly getting traded? Is there any chance that's Doug Pederson?

In case you missed the report Mike is referring to, via Mike Florio:

It’s a viable strategy for any coach seeking a new head coach, and hoping to hire a proven commodity instead of relying on the potential Peter Principle-proving promotion of a coordinator. It’s not a trade per se, because it starts with the new team calling a coach’s current team, inquiring about whether the current team would be willing to be compensated for losing the coach, and reaching a deal for what the compensation would be. Then, the new team would communicate directly with the coach in the hopes of working out a contract pursuant to which he’d be employed by the new team.

In the current cycle, there’s buzz that one of the teams currently looking for a coach — the Jets, Jaguars, Lions, Falcons, Chargers, and Texans — could attempt to hire a current head coach with another team. The coach’s current team could end it all quickly by hanging up the phone. But it costs nothing to make the call, and it’s believed that at least one team may make the call to one of the teams that, at least for now, has a head coach.

That wouldn't surprise me. The Jets need a head coach, and obviously, Pederson and Joe Douglas worked together in Philly. The Jets also have an extra first round pick, an extra third round pick, and either an extra fourth or fifth round pick, depending on conditions from their trade of Leonard Williams. Add in recent reporting that Pederson wouldn't mind being somewhere else, and it's really not that crazy.

Additionally, if I'm going to put my tin foil hat on here for a second, I'll add that the Eagles had the opportunity to coach one of the Senior Bowl teams, but my understanding is that they turned it down, though that could be pandemic-related. To note, you cannot coach the Senior Bowl if you have a new head coach.

Question from Office Linebacker: When do you think we will know if Jason Kelce is coming back or not? Imagine Howie would want to know prior to the draft, so he can whiff on his replacement.

I have no idea. Last year he made that announcement on April 16, but I don't know if that's a great predictor or not. I wonder if Kelce would be interested in trade possibilities if he wants to play another year, seeing as this team is extremely unlikely to contend in 2021.

Question from Brian: There are a lot of Howie Roseman haters out there. I would contend that the philosophy of roster building is solid. It’s more a case of missing on the draft and free agency. People complain about the linebackers all the time but don’t take into consideration that you can’t really invest at every single position.

Ever since the Andy Reid era began in Philadelphia, the Eagles have very clearly placed heavy importance on some positions over others.

The Eagles' current strategies are far more complex than the following, as they use all kinds of analytics that help guide their roster-building decision-making, but the super-simplified version of Reid's team-building philosophy appeared in a 2016 Sports Illustrated piece by Jenny Vrentas:

The basics of Reid's positional preferences were clearly adopted by Roseman, as the team has continued to build the roster in that way, even after Reid's departure after the 2012 season.

It's a tried-and-true way to build a roster, and one that I believe is right, however, (a) it's not Roseman's brainchild, and (b) I believe that the team has gone way too far in deprioritizing some positions, with linebacker being the most obvious example.

Question from RKotite: Jimmy, the tank-a-thon moved the Eagles up 3 picks. Using the trade value chart, when you add up the difference in value from pick 6 to pick 9, it equals the value of roughly the 60th pick in the draft. Is declaring to the league you tanked and living with that in the locker room worth that?

The draft value chart is a nice tool, particularly when it is used for draft-day trades in Rounds 2-7. I do not think it is a good tool at the top of the draft, when each new batch of prospects is unique. The difference between picking sixth and picking ninth could be the difference between landing a top-tier quarterback prospect, or not.

I'm not saying that quarterback is the route the Eagles are going (for now), but I do believe the difference in those two spots is worth a lot more than the late second-round pick the value chart says its worth.

Question from South Jersey Dive Bars Association: I respect your appreciation for The Jug, but may I suggest Jay's Elbow Room for shady company and bangin’ wings?

Haha, “shady company” is exactly how I would describe Jay’s. You’re braver than me if you have actually eaten food there. I’ll pass on all that, no matter how bangin’ the wings may be. That said, I’ve been to Jay’s many a night at 2:30 a.m., and it's usually memorable.