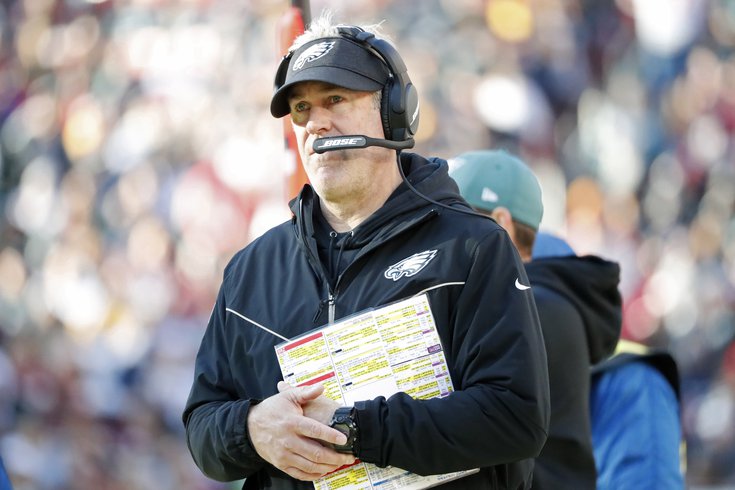 When Doug Pederson met with Jeffrey Lurie on the Tuesday after the conclusion of the Philadelphia Eagles' disastrous 4-11-1 season, he reportedly did not impress the owner with his plan on how to turn things around.

Pederson will reportedly meet with Lurie again on Monday in Florida, perhaps getting another crack at convincing Lurie that he has the answers, or maybe is willing to tell him what he wants to hear. Or maybe the decision has already been made, and Pederson is just going to get whacked. ¯\_(ツ)_/¯

The Eagles and Pederson have both maintained that Pederson is responsible for his coaching staff, which was proven to be a farce last year, when Pederson said that Mike Groh would return as the team's offensive coordinator and Carson Walch would stay on as the wide receivers coach. Both assistants were fired the next day.

The result? The run game was fine, but the passing attack was arguably the worst in the NFL. It finished near the absolute bottom of the NFL in a slew of statistical metrics:

Certainly, Carson Wentz and the Eagles' receivers had dreadful seasons, which contributed to the Eagles' horrendous offensive production, but in addition to poor play, the passing scheme was disjointed and it lacked creativity. Scangarello and Mornhinweg won't be back in 2021. Who will join them?

The two main issues likely to be discussed between Pederson are Lurie are the future of Carson Wentz in Philadelphia, and how Pederson intends on formulating his coaching staff.

• It was recently reported by Chris Mortensen of ESPN that the relationship between Pederson and Wentz is fractured. If Lurie and Howie Roseman intend on having Wentz back in 2021, or if Roseman can't find suitable trade compensation to make it worth taking on the massive cap hit that would accompany a Wentz trade, Pederson will have to convince Lurie that he and Wentz can flourish together once again.

• As for the coaching staff, it was reported by Jeff McLane of the Inquirer that Pederson "looks upon Taylor as a protégé and was considering promoting him to offensive coordinator." If Pederson insists that Taylor is his guy, and Lurie sees it another way, it could potentially cost both Pederson and Taylor their jobs.

And then there's just the ability to communicate an overall plan. In a piece published by Mortensen and Tim McManus of ESPN, it was revealed that Lurie was "troubled" by Pederson's description of the offense's identity. During the season, back in early October, Pederson was asked what the identity of his offense was, and he stumbled through his answer.

"I would define the identity as using the strength -- number one, you've got to go off the strength, I think, of your quarterback, and then you build your plans around that," Pederson said. "So obviously the identity, you want to be able to run the football, play action pass, the QB movements, and then... the screens, you've got to mix in the screens effectively in your system. You want to be physical up front. That goes without saying. You want to be dominant there, control the line of scrimmage, all of that, and that's where the run game comes in.

"But I think you're seeing that you've seen the identity a little bit kind of rear its head up in these games, and then it goes back down because we haven't been as successful on 1st down. Been in too many 2nd-and-long and 3rd-and-long situations, which gets you out of who you are a little bit as an offense. Those are the things that we have to focus on, continue to work at that, and go into each game with that mindset and that confidence level."

If Pederson's answer to Lurie was anything close to that... oof.

What are Doug Pederson's strengths?

In my view, Pederson exhibited four strengths that were on full display during the Eagles' Super Bowl run in 2017.

Since the Super Bowl season, one could poke holes in each of those four strengths if they were so inclined to try:

Should Pederson stay or go?

First, it should be noted that it will be absurd if Pederson is let go, but Howie Roseman gets to keep his job. Pederson unquestionably had a bad 2020 season, but Roseman has had three straight bad offseasons.

However, looking forward, what does Pederson offer if none of his four biggest strengths noted above are differentiators between himself and other head coaches?

The feeling here is that Pederson could be successful in a new environment, but that his time has run its course in Philadelphia, partly because he has lost his mojo, and partly because he has not been put in a good position to succeed the last three years, while also serving as the accountable face of the franchise, forced to answer hard questions four days per week while his general manager and owner have left him hung out to dry.

Unfairly or not, Pederson should probably go, and Lurie is likely to pull the plug.

As in, it's your decision, not what you think the team will do.