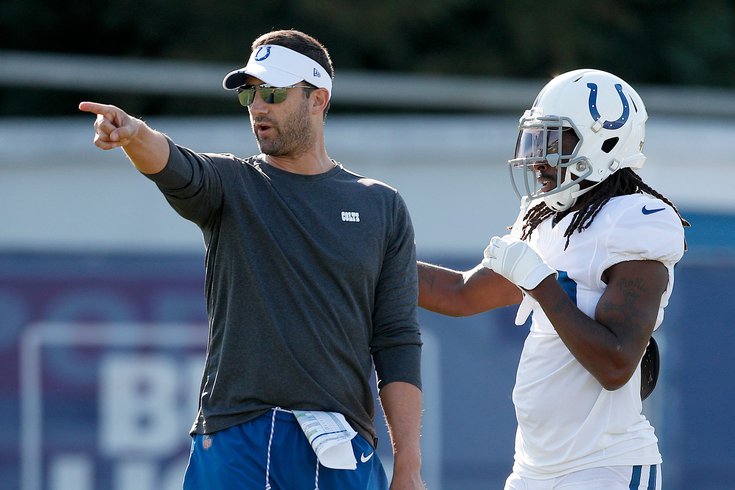 It took about a week and a half for the Eagles to find Doug Pederson's successor, but it appears they have found their man as multiple reports have the Birds hiring Colts offensive coordinator Nick Sirianni as their next head coach.

It was an exhaustive 10-day search for the Eagles, who interviewed close to 10 candidates and were linked to several others. That includes Josh McDaniels, who many thought was on the cusp of being hired just a few days ago. Instead, the Eagles opted to hire the understudy of Frank Reich, who was the Eagles OC during Carson Wentz's first two seasons in the NFL and won a Super Bowl in Philly before the Colts hired him away, coincidentally after McDaniels snubbed them.

There's a lot of unknown about the 39-year-old coach who is set to take over the reins of one of the most scrutinized NFL teams, but there are three questions that stand alone as needing to be answered by Sirianni. Whether that comes in words or actions remains to be seen, but with the news still so fresh, let's take a look at some things we'll find out eventually.

Can he fix Carson Wentz?

This is arguably the biggest question facing Sirianni as he arrives in Philly, and the answer will likely be inextricably tied to his future as Eagles coach. If he can answer this affirmatively, the other questions will ultimately matter less, as having a top-flight quarterback, which is what Wentz was at his peak, can mask a lot of other issues in the NFL.

The Eagles made it no secret that they were looking for a coach who also believed that Wentz was fixable, and it would appear Sirianni fits that mold. He's an offensive-minded coach who has spent the last few years working alongside the guy (Reich) who was able to bring out the best in Wentz. At the very least, you'd like to think he picked Reich's brain before accepting the position.

The real challenge for Sirianni will be getting Wentz to buy in to whatever changes he needs him to make, as reports both past and present suggest that the quarterback doesn't take well to coaching. If he's unwilling to change, there might not be anything Sirianni (or anyone else) can do. That being said, it doesn't seem like the Eagles new coach is a fire-and-brimstone type of guy, and might just be the kind of voice that can get through to Wentz, if indeed he doesn't like hard coaching.

I spoke with an NFL source who is very familiar with Nick Sirianni's coaching apporach, he said his strength is "He focuses on the positive (attributes) of players, as opposed to the negatives."

The source said he coaches to his players' strengths. #Eagles

Here's more from Kaye on the specific relationship that will need to develop between Wentz and his new coach:

If Wentz truly wants to be coached harder and smarter, as has been reported, the Eagles feel like they’ve found the man to follow through on that approach. If Wentz can’t buy into his new general, he’ll continue to falter down the path of the NFL’s worst quarterbacks.

While Sirianni and Wentz are essentially business partners on offense, the new head coach doesn’t have time for hand-holding or coddling. He’s a first-year head coach in a tough market with a rebuilding roster and a nasty cap situation. Sirianni can’t waste time convincing Wentz that his methods are sound. The new coach needs his quarterback to step up, buy-in and lead by example immediately, or this project will turn into an “F” just like the last one.

Sirianni is here to fix Wentz, but only the quarterback can determine whether or not he’s willing to be fixed.  [nj.com]

Of course, he'll have to walk a fine line, especially if the quarterback's struggles continue next season, because, as we mentioned above, an inability to fix Wentz will likely lead to an inability to win games and ultimately an inability to keep his job.

What kind of offense will he run?

And will he call the plays?

Wentz aside, there's very little known about Sirianni as a play-caller because, well, he didn't call the plays in Indy. That was Reich. And there's no reason to believe that Sirianni will run the same offense in Philly that the Colts ran during his three seasons as offensive coordinator. After all, they had three different quarterbacks there in that span — Andrew Luck, Jacoby Brissett and Philip Rivers — and now Wentz will be his fourth in as many years, and a reclamation project at that.

One thing that does seem likely, however, is that the young coach will bring a similar style of aggression that we saw from Pederson, especially early in his tenure.

At this point, however, we don't even know if Sirianni will be calling the plays. He could hire an offensive coordinator with play-calling experience to take that off his plate as he acclimates to head coaching duties. He could opt to do it on his own, like Doug Pederson did. These are all questions that will likely be asked in his first press conference.

On top of that, the Eagles also have Jalen Hurts on the roster, who is a very different quarterback from Wentz, one that can completely tear a defense apart with his legs but still has his struggles through the air. Would Sirianni be the one to decide whether Wentz or Hurts is the better fit for his system? That brings us to our final question...

Can he push back on Howie Roseman?

Let's say Wentz isn't fixable — or remains unable to accept coaching or take any accountability when he struggles — and Sirianni believes he needs to move on. Would he even have the ability in Year 1 to make a call like that? Or would Howie Roseman and Jeffrey Lurie force his hand? Pederson reportedly made the decision to bench Wentz on his own, but he was a Super Bowl winning coach in his fifth season and there were still questions at the time about whether or not he would've been able to make such a change on his own.

Beyond that, it seems like management has its mind made up about who should be the starting quarterback in Philly, but after getting to work with Wentz firsthand, Sirianni may no longer think he's fixable, regardless of what Reich has told him about the 28-year-old passer. Is he going to be forced to stick with Wentz regardless, perhaps in part due to the fact that the team doesn't like the optics of that massive cap hit sitting on the bench, or worse, playing for another team?

Part of fixing Wentz will be surrounding him with better players, and the Eagles cap situation has made it tough for the team to do that any other way than through the draft. With Roseman's sketchy track record, especially in recent years, how much say will be afforded to Sirianni? After all, it was Pederson who ultimately paid the price for all of Roseman's misses in both the draft and free agency. It would only be fair to allow the coach to have some more input, especially since he's the one working with the quarterback day in and day out.

That being said, it's still hard to view Sirianni as the kind of guy who will push back against Roseman. He just doesn't have the track record to do so, and is likely happy just to have a head coaching job in the first place.

I’m afraid the #Eagles new head coach may just be a puppet for management to control. 🤦🏾‍♂️

Stay tuned. We'll soon find out the answers to all these questions and more in due time.