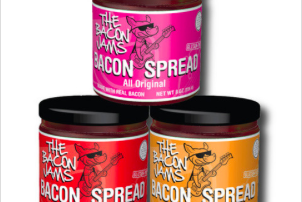 The Bacon Jams offer three flavors of the spreadable condiment made from real bacon.

If you've never heard of bacon jam before, you are in for a great milestone and you may start to see more of it around in the near future.

Local producer The Bacon Jams, which sells spreadable bacon products in three different flavors, will double its national footprint after signing on with a new distributor, according to the Philadelphia Business Journal.

The expanded distribution will take effect in November as the company pursues a variety of other initiatives to build a bigger market for its products. The Bacon Jams will begin selling Canada later this year and plans to work more closely with restaurants to have the spreads available to patrons as ingredients or condiments. The company also hopes to gain greater visibility in Philadelphia.

The Bacon Jams is comprised of five full-time workers, five part-time workers and a group of twenty people that collectively participate in cook days.

Learn more about the company here.