Meet the illustrators & enthusiasts telling their stories frame by frame 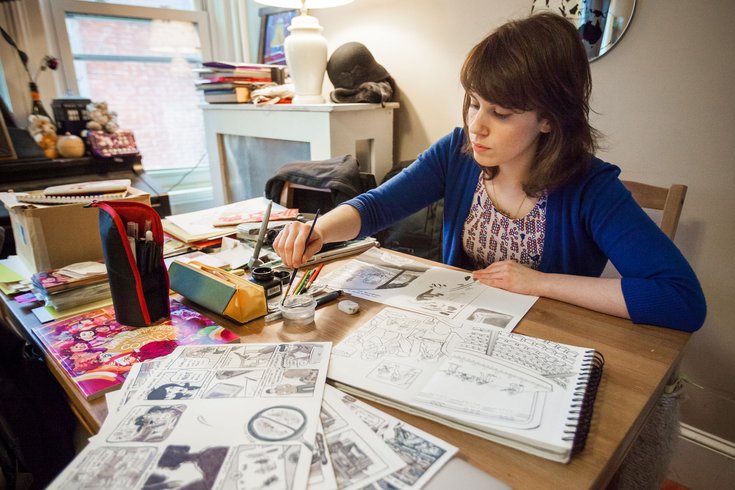 Read More
Whether you grew up reading "Archie" or "Batman," one thing is clear: the comic book scene is not what it used to be. Not only are feminist superhero characters becoming hot sellers (though perhaps not at the rate one might hope) but comic books have also expanded far past the superhero realm. From graphic novels and web series to the people creating them, the industry is rapidly changing.
As it so happens, Philadelphia is flush with cartoonists, illustrators, artists and comic enthusiasts. Though women tend to be under represented both on and off comic pages, these five local women represent just a smattering of the city's crush of talent. 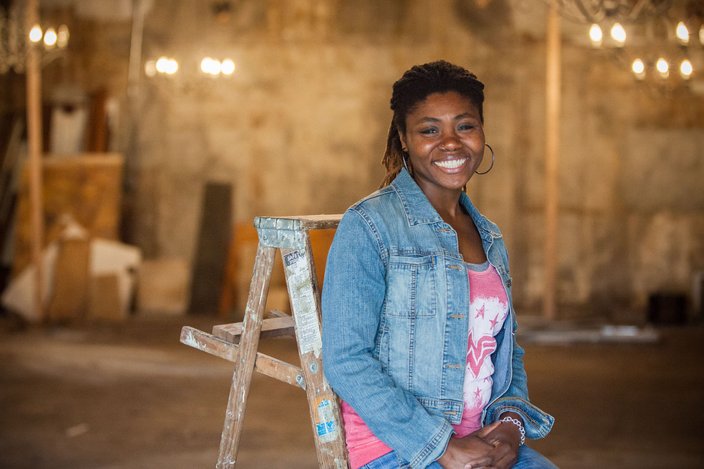 Thom Carroll/PhillyVoice.com
She may not have super powers (that we know of), but Ariell Johnson is Philly's version of Wonder Woman. The entrepreneur will soon open Amalgam Comics & Coffeehouse in Kensington with the sole purpose of fostering a thriving, diverse comics community.
Johnson grew up loving 80s TV shows inspired by comic book characters and was introduced to the books by a friend in high school. While studying at Temple University, Johnson continued her self-proclaimed obsession by buying books at Center City mainstay Fat Jack's before heading to her favorite cafe to read. When that cafe closed, Johnson was at a loss.
Years later and as passionate as ever, Johnson decided to create her own shop where others can enjoy books, discuss favorite stories with other fans and have a cup of joe. When Amalgam opens later this year, Johnson plans to fill its calendar with community events like art showings, readings and movie screenings.
Above all, though, Johnson will make sure everyone is welcome at Amalgam. Not only will she stock kid-friendly, locally made and independent comics, but she and her staff will work hard to make sure the uninitiated don't feel intimidated or overwhelmed by answering questions and creating an inclusive environment.
As a black woman who enjoys comic books, Johnson calls herself "a rare breed." But with her store and, eventually, children's comic book classes aimed at minorities and girls, she hopes to change that.
"By focusing on girls and children of color, we’re also addressing the diversity issue [in comics] because if you really want to get more diverse work then you need a more diverse creator base," she said. "Introducing kids at an early age ... will be really beneficial to the comic book industry as a whole." 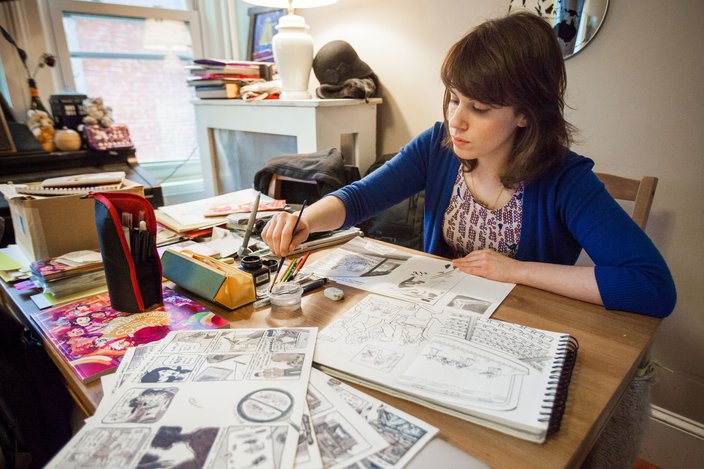 Thom Carroll/PhillyVoice.com
When Josh O'Neill of West Philly comic shop and publisher Locust Moon was approached by City Paper to curate a weekly full-page comic, it's no surprise his first selection was artist Kelly Phillips. Her work is funny, smart and drawn in a timeless way that harkens back to the traditional newspaper comics now so seldom found in print.
Take, for example, her visual pun illustrations of dinosaurs or single-frame laments about her cats. Phillips' more quirky side can be found in her graphic novels. Her series "Weird Me" tells the all-too-true story of her teenage years spent running a Weird Al fan page -- yes, really.
She's also the editor and co-founder of "Dirty Diamonds," an all-female comic anthology. Each volume centers around a specific theme and, though it features many local artists, has since expanded to international submissions. The fifth volume -- whose theme was comics itself -- featured contributors from six countries.
Phillips and childhood friend and fellow artist Claire Folkman were inspired to create "Dirty Diamonds" in 2010 after attending the Museum of Comic and Cartoon Art festival in New York.
"We had been looking around at all the comics at the show ... and realized that the proportion of men to women in [anthologies] were always kind of skewed. ... And we thought, if we want to see our work published and we want to see the work that we like published, why don't we just do it ourselves?" Phillips said.
Their mission to spotlight other women is catching on. Phillips said that submissions for their sixth volume, due out in September, tripled those of previous editions. They're creating gender equity, one comic frame at a time. 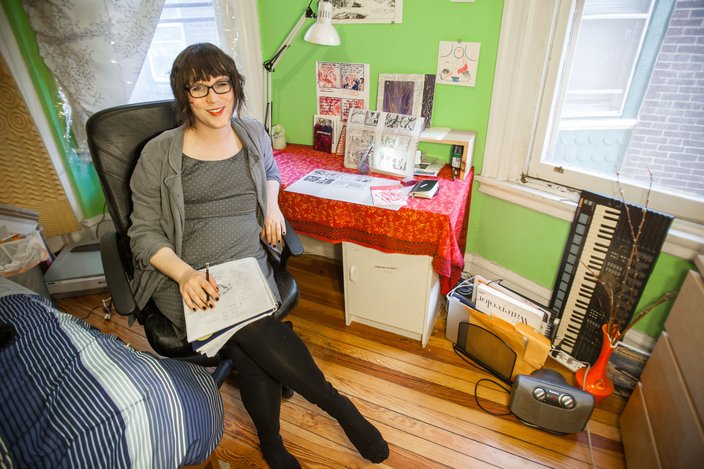 Thom Caroll/PhillyVoice.com
Like many other cartoonists and illustrators, Annie Mok grew up loving comics like "Peanuts" and "Calvin & Hobbes." Her comics and illustrations are now a far cry from the stories she grew up with, though it took time and hard work for Mok to find her personal aesthetic.
After years of drawing in the clean style of traditional comics, Mok felt at odds with their slick, constricted look. She finally found her artistic voice -- which she describes as "scrappy and leaky" for its sketchy, rough, outside-the-lines quality -- after facing personal hardships and taking a comics correspondence course with theorist Frank Santoro.
Now her work explores everything from Warhol Superstar Candy Darling and the work of artist Egon Schiele to street harassment, sexuality and abuse. She also writes for Rookie, the online magazine for teenage girls.
Mok creates solo and collaborative comics for the site as well as writing fiction and nonfiction, often providing the illustrations for her work. Rookie has an intelligent, rabid fan base, and Mok has felt the love from her readers.
"Working on Rookie has been the most rewarding thing I’ve ever done because of the feedback," she said.
When Mok isn't writing or drawing, you can find her on stage: She sings for local pop band See-Through Girls. You can catch them at The Barn on Baltimore, Friday, April 17. 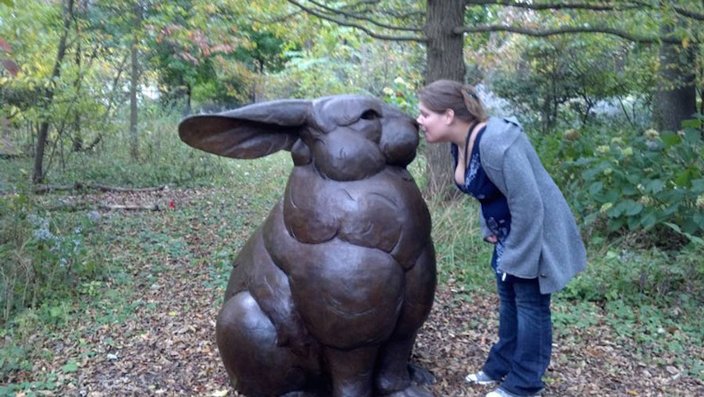 Christine Larsen/PhillyVoice.com
If you've seen a great poster for a local event or entered a comic book store in the past few years, chances are you've run into Christine Larsen's work. As a cartoonist and illustrator, her work can be found everywhere from advertisements for Johnny Brenda's and Elmwood Park Zoo events to YA book covers and "Kung Fu Panda" comics.
Her colorful brush-and-ink creations and kinetic, animated style means she can bring life to both licensed characters that audiences already love and her own independent work. Citing the Coen Brothers as a storytelling inspiration, Larsen fell in love with comics when the "Tank Girl" film, based on the comic series by the same name, was released in 1995. Manga and French comics also influenced the artist's style.
Her favorite work thus far has been shorts she contributed to independent comic anthology "Imaginary Drugs." The project began as a kick-starter campaign before being picked up for a wide release this winter.
Larsen also teaches illustration foundation and comic courses at the University of the Arts. With such a successful career underway, Larsen has some key advice for students looking to follow her footsteps.
"Finish a comic. I think a lot of people have a lot of good ideas but an idea isn't really anything until you finish it. Even if it's not the best thing you've ever done in the world, it's important to get those pages behind you," she said. 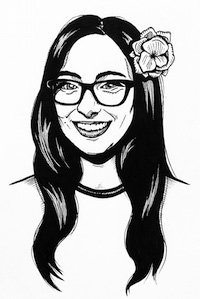 By teaching young children about the world of comics, Lindsey Wavrek is helping to usher in the next generation of cartoonists and storytellers. In five-week sessions in the gallery of Locust Moon, Wavrek gets kids drawing and telling the stories that are important to them, all with a healthy dose of fun.
A printmaker by trade, Wavrek has always been immersed in narrative art. Knowing that the arts were so important to her upbringing, she joined Locust Moon's class program hoping to add reading and writing to the curriculum and make it more accessible to children.
Some of Wavrek's students come in with no comics background whatsoever and others have a whole fleet of characters ready to go. Since the kids range from 7 to 14 years old and come to the table with all different skill levels, a lot of collaboration ensues.
Frequently the group creates zany, hilarious comics driven by their love of funny stories. Though the classes are often made up of mostly boys, Wavrek notes that girls have been attending more and more, often using class as an opportunity to show off their skills and prove themselves.
Wavrek's classes aren't just about learning to draw, though; they're also about instilling confidence in children who might not have regular opportunities to express themselves through art.
"We stress learning, but a huge part of it is social interaction and being able to make friends and learn to respect each other and learn [that] you do have value. What you do is important. Just because your school doesn't offer it doesn't mean it's not a valid form. What you can do is significant."