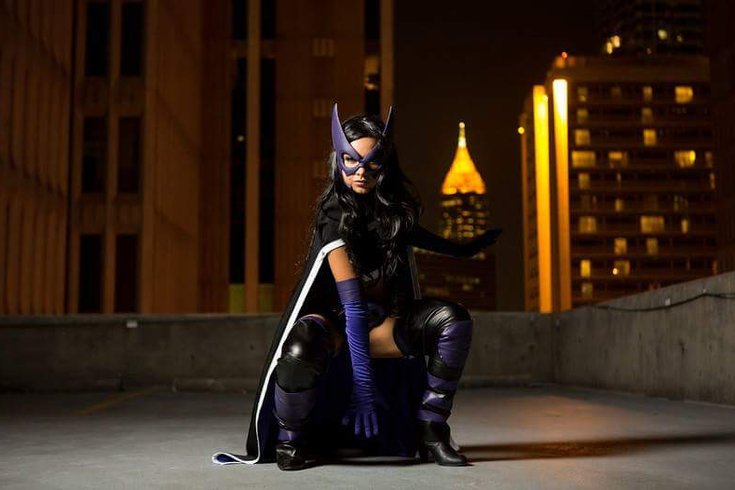 Read More
When North Philadelphia native Soni Aralynn (stage name) was in middle school in 2003, her best friend coaxed her into attending an anime convention. Great, she thought, a bunch of giant geeks hanging around panels.
But, lo and behold, when she came back from the convention, she was infatuated with the costume culture. She spent $20 at a flea market for a sewing machine and taught herself how to sew costumes. The rest, as you might say, is history.
Now, with her following of about 260,000 on Facebook, it's her full-time job: She travels internationally to make appearances at conventions, like Wizard World Comic Con Philadelphia (coming again in May), and pose for stylized photos -- with the occasional costume competition, to boot.
"People think we're just dressing up for attention, but we're actually representing characters we really care about," she says.
The misconception is that cosplay is inherently sexual -- like a license to have outrageous, risque Halloween parties year-round.
That fundamental misunderstanding of cosplayers -- female cosplayers, especially -- as objects of sex has, as comic book culture has pervaded pop culture in recent years, developed into a problematic perception from convention attendees that cosplayers' occasionally skimpy attire is an invitation for sexual advances.
It's a perception that's false, she says.

“It’s the persona I’m trying to capture – always," she explains. "If I’m reading or watching something, it’s a moment of inspiration – ‘I connected with this person, and I have to do this costume.’"

The trouble is, attendees suddenly encounter real-life versions of their fixations at conventions, and instances of sexual harassment occur. In 2013, San Diego Comic-Con, which attracted 130,000 attendees last year, fought calls for change regarding its relatively lax anti-harassment policy.
For Aralynn, she says the majority of her harassment experiences happen online ("keyboard warriors," she calls them), but that she's had her fair share of convention encounters as well.
"I’ve definitely had creepers. Maybe not to an extreme level, but there's a photo floating around that my friend took of me in a Mortal Kombat costume, and there are three people in the background taking photos of my ass," she says. "I see a lot of butt shots. And it’s kind of rude, you know what I mean? Even if I am wearing a leotard."
The worst offenders, she says, are men who scream demands at her or, unsolicited, grab her to maneuver a photo.
The message, she sums up plainly and succinctly, is this: "I'm not your monkey."

A Culture of 'Growing Pains'

The issue's sudden call for action is all about a change in scale.
Each year, tens of thousands of comic book, television, anime and video game fans funnel into the Pennsylvania Convention Center for Philadelphia's annual Wizard World convention. There are panels, photo ops, contests, vending and, more than ever, cosplay.

"Cosplay has become such a big thing at conventions now that it feels weird going to a convention and not cosplaying at it," Ashley McCague, a local cosplayer, told PhillyVoice.com. 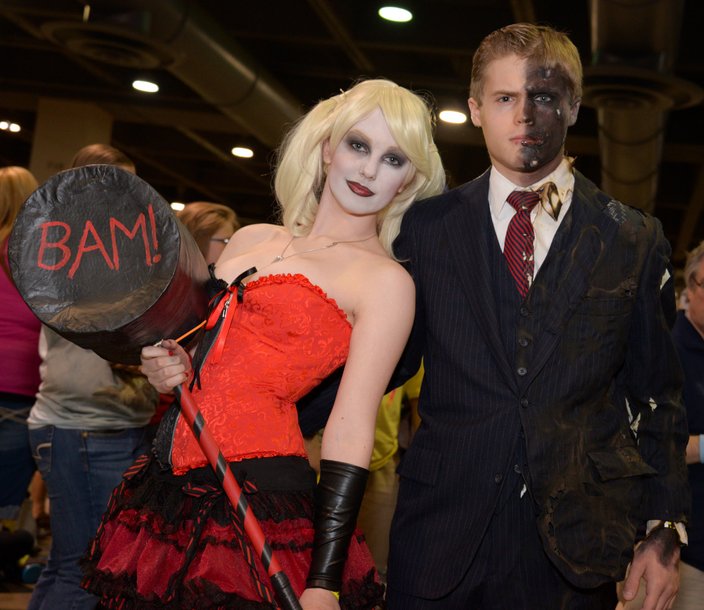 For those unfamiliar with cosplay, the easy explanation is this: It's a combination of costuming and onstage role-playing (though the latter is less prevalent in modern practice). It began organically in the decades leading up to the 1980s, when attendees of science-fiction conventions across the country began sporting costumes of their own volition. By 1984, no one batted an eyelash when a fully done-up Trekkie was spotted in a convention center -- so common that an amused Japanese reporter coined the term "cosplay." From there, the snowball continued to roll, speeding up and building to boulder size in recent years as comic book culture has fled the dark recesses of the Web in favor of social media and has become embraced, not shunned, in major entertainment media -- you'd only have to look at "Guardians of the Galaxy's" gross $333 million earned domestically last year for proof.
"I think that a lot of [cosplay harassment] has to do with growing pains – comics are pop culture now," Chris Patchell, a professor of comic illustration at University of the Arts, told PhillyVoice.com. "And the audience you’re getting at these [pop culture] shows is bigger, and when you have that, you get all kinds of people, and you get more jerks."
In order for the pop-culture audience to change its attitude toward women, he says, film studios and comic book behemoths like Marvel and DC Comics will have to abandon their own "sex sells" attitude -- much in the way, he emphasizes, many independent comic book creators already have.

As for Wizard World Philadelphia, which drew 85,000 attendees last year (the second-largest Wizard World convention, next to Chicago's), a spokesperson for the entertainment company told PhillyVoice.com that the event is pegged as family-friendly and would not comment on the training security personnel and volunteers go through to address harassment. The spokesperson did point out, though, that the entertainment company takes the approach of "cosplay is not consent."

Enter: the three Philly women who helped popularize that catching-like-wildfire slogan in the first place.

'Cosplay is Not Consent'

Feminist Public Works Director Rochelle Keyhan and her two cohorts can be partly credited with whistleblowing conventions' harassment problem in 2013, through a nearly 3,000-signature petition. The Center City-based organization -- previously a chapter of Hollaback! -- also manages the "Geeks for CONsent" campaign.
Geeks for CONsent's initial pressures leaned against San Diego Comic-Con for having what Keyhan sees as vague policies. The org's advocacy work, in general, encourages conventions, whether in San Diego or Philadelphia, to broadcast the group's "cosplay is not consent" message through signs and better train convention volunteers and security staff to cultivate a safe space by the standards of UN Women. The gold standard, she says, is the recently revamped policy clearly and thoroughly spelled out by New York Comic Con, which goes as far as to have a smartphone app for reporting harassment. (Philly Wizard World's anti-harassment policy, meanwhile, is buried in a general FAQs page.) 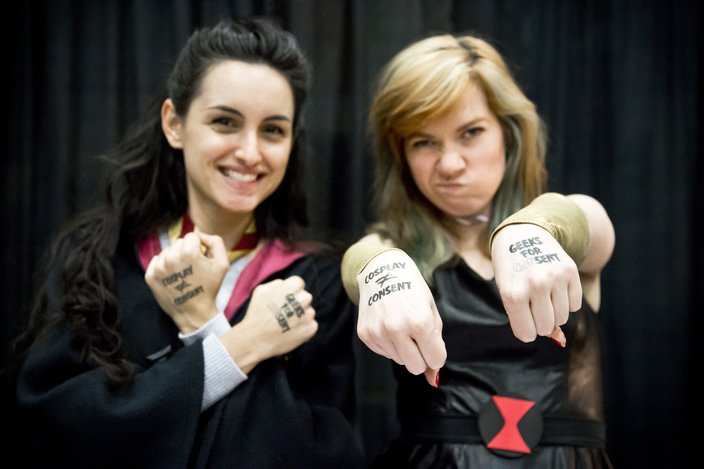 Feminist Public Works Director Rochelle Keyhan, left, and Erin Filson, creative director, are also cosplayers. / Photo by Andrew Bossi
In truth, it's hard to gauge exactly how prevalent the issue of harassment is at conventions, in Philly or elsewhere. The most scientific data available (for now) comes courtesy of a Bitch magazine survey, which found that 25 percent of 3,600 respondents had been sexually harassed in the comics industry.
But Keyhan insists it's more widespread than you'd think.
"California, New York, Florida, Philly -- this is happening all over the country," Keyhan told PhillyVoice.com.
Recently, she says, the group has been gathering objective data (to be released later this year) from conventions -- primarily San Diego Comic-Con, but also Wizard World Philadelphia. Locally, she says, most women report street harassment traveling to and from the convention, rather than inside of it. She aims to continue monitoring the event, with assessment planned for this year's convention.
"In our convention-specific work, [comments are] almost always more vulgar and overtly sexualized. Someone won’t start out with, ‘Hey baby!’ They'll start with, ‘Nice tits!’ or, ‘Lookin’ good!’ or zoom in on someone’s butt or breasts without asking and taking a picture -- it’s aggressively sexual," Keyhan says. "And then it escalates: We get a lot of reports [across the country] of groping, where people grab their ass, tip their skirts and [take up-skirt photos] -- which, there are even actual blogs that make a profit on up-skirt photos."
And, given all of the above, it's not surprising that Keyhan and company have championed cosplay and consent as a cause of feminism.

"Any time someone tells women their clothing is the problem, not the decisions people make in response, we have to talk about how that's not only victim-blaming, but also shows very little confidence in men's ability to be rational adults," Timaree Schmit, a local sexologist, told PhillyVoice.com. "This idea that a woman's body is so lust-invoking -- whether it be dressed as Harley Quinn or just exposing her legs as she walks down the street -- that a man doesn't have to abide by the basic tenets of human respect and politeness is really sexist -- to everybody."
The need, then, is for education about what "consent" actually entails.
"Someone's clothing, no matter how it makes me feel, isn't a get-out-of-consent-free card -- even if I saw a shirt that literally says, 'Touch my body,' I'd still treat the wearer like a human and engage them to ascertain they're actually interested," Schmit adds. "But some folks have a hard time conceptualizing that just because a stimulus evokes a response, that they are still responsible for their behavior."
Keyhan's ongoing goal, she says, is to spark a dialogue about the harassment problem that's more streaming than stagnant -- a conversation that won't disappear once initial intrigue fades.
And, she says, what needs to be established right now is how popularization of comics, anime and "geek" culture has a tangible impact on the treatment of women and their willingness to report harassment -- formally or otherwise. The potential danger, she says, is that the comic community may be so enamored with the newfound mainstreaming of the culture that harassment may get swept under the rug for image's sake.

"People are aggressively resistant to [accepting their experiences] because comics are now popular and mainstream and destigmatized, and they’re sort of bringing us down by basically telling women to ‘take one for the team,'" Keyhan says. “Comics are about social justice, and good and bad, and doing the right thing. And it's baffling that there’s such resistance to making this community safe and more inclusive.”