A look ahead to the 2016 quarterback class: Jacoby Brissett edition 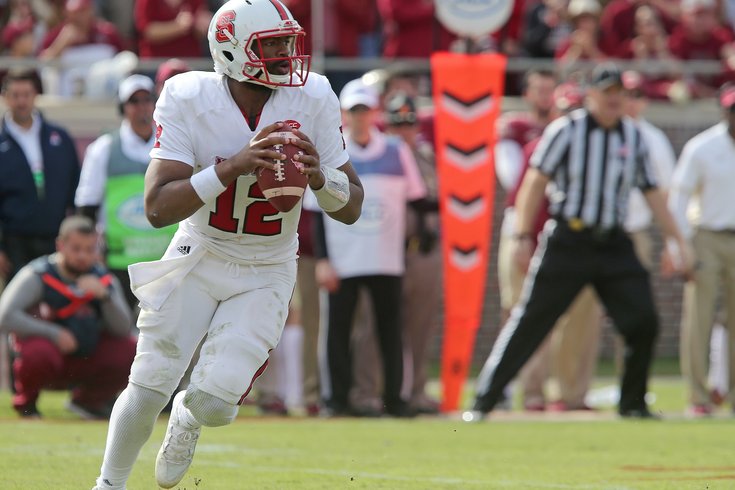 No matter what happens the rest of this season, or whether or not the Eagles re-sign Sam Bradford this offseason, one thing feels very clear -- The Eagles need to find a way to get a quarterback in the 2016 NFL Draft.

While Brissett's TD:INT ratio is very good, the numbers that are concerning are his YPA and his sack totals, which we'll come back to. Let's get to what I liked, and what I didn't. (Gifs made from videos via DraftBreakdown.com):

Brissett is listed at 6'4, 235, which is a desirable size for an NFL quarterback.

Brissett is a little bit overrated here, as I feel that several of the quarterbacks I've evaluated so far are better runners, such as Cardale Jones, Dak Prescott, and Carson Wentz. However, picking up yards on the ground is part of Brissett's arsenal. He's not going to run a blazing 40 at the Combine, but he does a good job escaping pressure and buying time to make throws down the field.

Here is a very impressive run by Brissett:

Brissett is really good from within 15 yards. He throws crisp passes that are typically on the money, with tight spirals.

Throwing on the run

Brissett's best attribute is his accuracy on the run, particularly when he's running to his right. I actually believe that he (and perhaps NC State's staff) were overly reliant on it, but it's understandable why. A couple of examples:

He rarely takes shots down the field

As noted above, Brissett's yards per pass attempt is 6.7 this season. That's good for just 89th in the nation among quarterbacks with enough qualified pass attempts. The reason why? Brissett rarely takes shots down the field, and when he does, they are often off-target.

He holds onto the ball for an eternity

Brissett has an impressive highlight reel of improvisational plays, in which he seemingly makes things happen out of nowhere. Here are a few examples:

However, the only reason he has so many of those plays is because he holds onto the ball for an eternity. Far more often, he is taking a sack. Over the last two years, Brissett was sacked 61 times.

Brissett has ability, but he does not make quick decisions at all. At the NFL level, every quarterback has to be able to make plays from the pocket, and Brissett is (A) slow to deliver the football, and (B) way too quick to look to escape from the pocket. Brissett will compete at the Senior Bowl in a few weeks, so we'll get a better look at him then, but for now I see him as little more than a developmental project who will be taken late Day 3 of the draft.