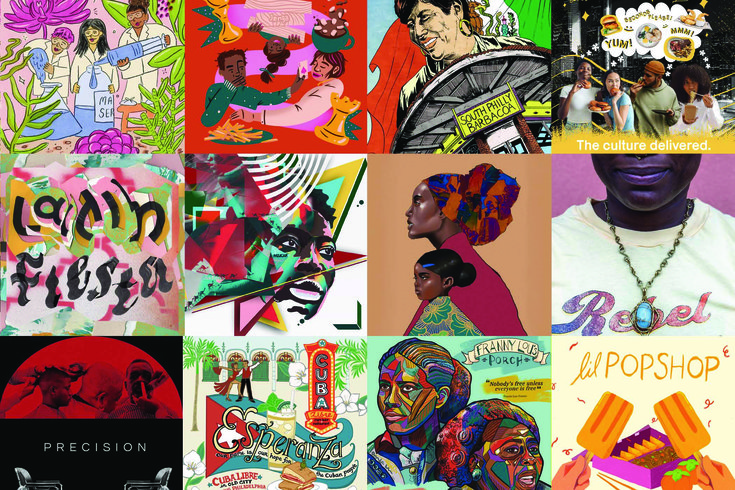 Visit Philadelphia's 'Love and Grit Storefronts Project' transformed 14 empty spaces across the city into art installations that were created by 12 local artists in partnership with 24 Black and Brown-owned establishments.

A number of empty storefronts across Philadelphia have been transformed into art exhibits as part of an effort to support minority-owned businesses that have been adversely impacted by the COVID-19 pandemic and local Black, Brown, Indigenous and LGBTQ artists.

Visit Philadelphia has unveiled its "Love and Grit Storefronts Project" that refurbished 14 empty spaces across the city with original works designed and created by 12 local artists in partnership with 24 Black and Brown-owned establishments.

Each artist worked and collaborated with two businesses that served as the inspiration for their respective creations. Among the notable minority-owned establishments to participate in the effort were South Philly Barbacoa, Cuba Libre and El Merkury.

The art installations can be found at vacant storefronts in neighborhoods like Northern Liberties, Old City, Roxborough, Chestnut Hill, Center City and Chinatown. The artwork will be on display across the city throughout the holiday season.

Those who enjoy the artwork can enter to win a $2,000 prize package with over 20 gifts from a number of Black and Brown-owned establishments in Philadelphia.

Among the notable prizes include clothes from Harriett's Bookshop and The Modern Republic and wellness products from A Man’s Cave and Ursula’s About Phace Rittenhouse Makeup Studio. Anyone can enter the sweepstakes either online or through a QR code that can be found on each of the 24 commissioned works of art. The contest is open through Dec. 30.

“The love and grit, creativity and resilience of Philadelphia’s artists and entrepreneurs are the soul of this city, and the campaign demonstrates what Philly does best: Turn loss into inspiration and empty spaces into opportunity," Visit Philadelphia's chief innovation & global diversity officer Rachel Ferguson said.

The campaign, which is an extension of Visit Philly's "Love and Grit" podcast series, was funded partly by the John S. and James L. Knight Foundation.

Below are each of the local artists participating in the initiative, along with their respective creations and the businesses that each has partnered with.

Urquhart, a contemporary artist, teamed up with Franny Lou's Porch in Kensington to create "Frances and Fannie," a pair of mixed-media portraits consisting of jewel tones of the coffee shop's namesakes — activists Fanny Lou Hamer and Frances E.W. Harper. The artwork can be viewed at 806 N. 2nd Street in Northern Liberties.

Urquhart also collaborated with Girls Auto Clinic in Upper Darby to create "Feminengine," a blueprint-like multimedia that showcases the inner workings of a car and highlights the technical roots and expertise of the shop. The piece is located at 7900 Germantown Ave. in Chestnut Hill.

A group of primarily Black female artists who work anonymously, Mz. Icar collaborated with mid-20th century furnishings store The Modern Republic in North Philly to design "Infinite." The collage seeks to honor past design, pay tribute to the shop owner's journey and look forward to the future. The illustration was inspired by the shop's building and mid-century decor, as well as the relationship the furniture's time period had with African aesthetics. The artwork can be found at 244 Race St. in Old City.

Mz. Icar also partnered with The African American Museum in Philadelphia to create "Up and Over," a visual narrative designed using street and fine art to celebrate the movement while helping to amplify all voices. The creation is located at 1500 Market St. in Center City.

Selix-Gibson, a multidisciplinary designer, worked with South Philly barbershop Faheem's Hand of Precision to design a collage called "Precision." The artwork features photographs of owner Faheem Alexander, his customers — which includes several members of The Roots — and his barbershop. The collage can be viewed at 501 South St.

Gibson also paired up with Freedom Apothecary, a beauty and wellness shop in Northern Liberties, to create a collage called "Freedom." The artwork includes photographs of owners Morrisa Jenkins and Bonkosi Horn, their customers and products and the shop itself. The creation is located at 1500 Market St. in Center City.

Billington, a muralist and photographer, worked alongside online boutique shop The Sable Collective to create a photo collage of notable items sold by the store to showcase the organization's mission of spreading joy. The artwork, which bears the same name as the company, is located at 501 South St.

Billington also collaborated with Duafe Holistic Hair Care in North Philly to design an abstract work that features acrylic paint and portraits that show off the various hairstyles offered at the salon. The creation bearing the same name as the salon can be found at 8335 Germantown Ave. in Chestnut Hill.

Lozito, an illustrator and art director, teamed up with Inked Vintage in Old City to design an illustration called "Loved Threads Anew'' that seeks to showcase the energy and creativity of the vintage clothing shop. The creation can be viewed at 501 South St.

Lozito also partnered with Queen and Rook Game Cafe in Queen Village to create an illustration called "An Afternoon Adventure" using colors and images to show the vibrancy of the restaurant and bar that offers more than 1,000 games for customers to enjoy. The artwork is located at 7900 Germantown Ave. in Chestnut Hill.

Jones, an illustrator and comic book artist who draws images by hand, worked with popular Mexican restaurant South Philly Barbacoa, to create an ink sketch of owner Cristina Martinez rising above her Italian Market establishment. The artwork bearing the same name as the restaurant can be seen at 501 South St.

Jones also teamed up with Uncle Bobbie's Coffee and Books in Germantown to design a sketch of owner Marc Lamont Hill watching over his bookstore and coffee shop. The creation bearing the same name as the shop can be viewed at 636 South St.

Lara, an illustrator, designer and animator, collaborated with South Philly exotic pets and houseplants shop ILLExotics to create "Tropical Terrarium." The piece is an illustration of the shop with three hidden vignettes for viewers to find. It also depicts flowers, plants and animals that can be found in the store. The artwork can be found at 501 South St.

Lara also worked with South Philly skincare shop Sabbatical Beauty to design "Scientists at Work," which is an illustration of three scientists developing beauty items by using the company's products like bamboo, ginseng and lotus flowers. The creation can be found at 8123 Germantown Ave. in Chestnut Hill.

Hernandez also teamed up with Central American restaurant El Merkury in Center City to create "Delicious," a three-dimensional black-and-white abstract that seeks to invite viewers in like El Merkury does for its customers. The creation can be viewed at 12th and Arch streets in Center City.

Acosta, a graphic designer, partnered with the fashion design business Grant Blvd. in West Philly to create "Love: The Planet." The artwork is a photo collage of the symbols of love, peace and sustainability — which happen to be the company's three themes. The creation can be seen at 2207 South St.

Acosta also worked with food delivery service Black and Mobile to design an illustration called "The City of Foodily Love" that is based off the company's Instagram account and depicts a night out in Philly with photos of hungry foodies. The piece is located at 8123 Germantown Ave. in Chestnut Hill.

Chung, a graphic designer and illustrator, teamed up with artisan ice cream and fruit pies store Lil Pop Shop in West Philly. The artwork bearing the same name as the shop is located at 1001 Vine St. in Chinatown.

Chung also paired up with Vault and Vine, a flower store, coffee shop and event space in East Falls, to create a piece that can be found at 6117 Ridge Ave. in Roxborough.

Sabree, a contemporary artist, partnered with boutique shop P's and Q's to create an ink sketch called "The Crowns of Young Folk." The creation pays tribute to the shop's streetwear and sneakers. The sketch can be seen at 1001 Vine St. in Chinatown.

Sabree also worked with the home and lifestyle shop Yowie in Queens Village to design "My Mother's Influence." The collage consists of a combo of gouache and digital design that highlights stories focused on successful Black-owned businesses. The artwork is located at 1500 Market St. in Center City.

Lopez, an illustrator and designer, teamed up with Old City jewelry shop Philadelphia Diamond Co. to create a sketch that pays homage to the shop's husband-and-wife owners Ken and Nicole Black. The creation bearing the same name as the store can be found at 7900 Germantown Ave. in Chestnut Hill.

Lopez also collaborated with Cuba Libre in Old City on a piece called "Esperanza/Hope" that seeks to capture the energy of the Cuban restaurant's dining experience and provide hope for Cuban people. The design is located at 8026 Germantown Ave. in Chestnut Hill.