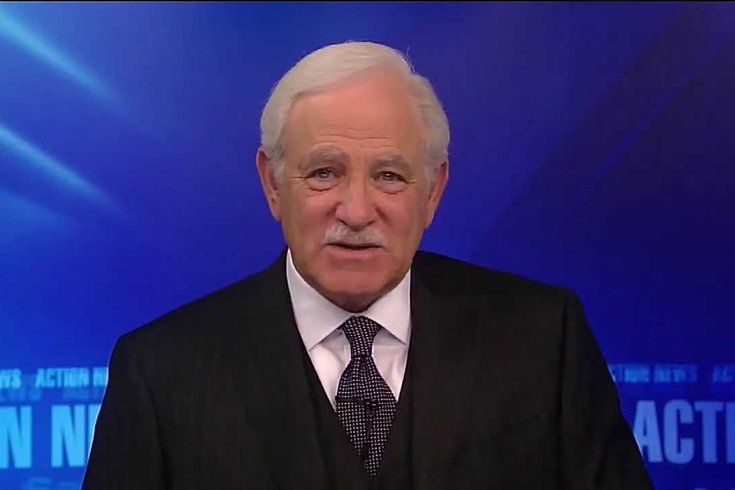 Veteran Philadelphia news anchor Jim Gardner will retired at the end of 2022 after a 45-year run at 6ABC. The 'Action News' anchor will continue at the station with reduced hours before his departure.

The day the Delaware Valley has long feared is almost upon us: Jim Gardner, the face of 6ABC's "Action News," will officially retire at the end of 2022 after 45 years with the Philadelphia news station.

Gardner, 73, addressed his pending retirement during the 6 p.m. broadcast on Wednesday evening.

For the remainder of the year, Gardner will continue to anchor the 6 p.m. newscast along with Ducis Rodgers and meteorologist Cecily Tynan. He will end his long run on the 11 p.m. broadcast after a final late night newscast in early January, the station announced.

"It's hard to imagine that I have had the opportunity to spend a professional lifetime with colleagues so committed, resourceful and wonderful," Gardner said. "They have taught me so much about television journalism and about myself. I am profoundly grateful."

Gardner said the interim transition in his schedule will provide a runway to his retirement, giving him a chance to take it easy in the evenings by watching or attending a Sixers game with his wife, or enjoying a laid back dinner in peace.

"It is a lifestyle I haven't experienced in 45 years — and it's time," Gardner said on Wednesday evening's broadcast.

Gardner has been at 6ABC since 1976 and has become the face of television news in Philadelphia, covering more than four decades of major events in the city and across the region. He has interviewed every president and major presidential candidate since 1976, and has anchored both the 6 p.m. and 11 p.m. newscasts since 1977.

Even beyond Philadelphia, Gardner has earned a reputation among the best news anchors in the business. When he celebrated his 40-year anniversary at 6ABC, he received high praise from late night host Jimmy Kimmel.

"There's a lot of fake news out there these days, so much fake news, but one man has always given it to us straight," Kimmel said in a tribute video in 2017. "Jim has the gravitas of Walter Cronkite, the tenacity of Ted Koppel and the mustache of Ron Burgundy. All the greats, wrapped up into one."

Gardner's news personality has always been balanced by a well-timed sense of humor and an ability to laugh at himself. He memorably cracked up when he struggled to pronounce the names of rappers, and once halted Cecily Tynan's live weather forecast in order to locate her missing earring.

The evolution of Gardner's magnificent mustache also inspired PhillyVoice to put together a visual retrospective of his look over the decades.

In recent years, Gardner battled through medical issues that at times caused him take breaks from his broadcasting duties, but he has remained a steady fixture at the station and among the viewers who cheered him on through their concerns about his health.

6ABC said the station will announce a replacement for Gardner in the coming months.

To celebrate the announcement of Gardner's much-deserved retirement plans, take a look below at some highlights from his career and a blooper reel from the man who helped make "Action News" the force it is today.

"I have spent most of my adult life at Action News, and many of our viewers have grown up and experienced life along with me and the on-air team I've worked side-by-side with," Gardner said. " I've been blessed to raise a family here and to be a member of this community over the past 45 years. I feel I have a special relationship with our viewers and the communities we serve, and I plan to continue to enjoy every minute with them over the next year."