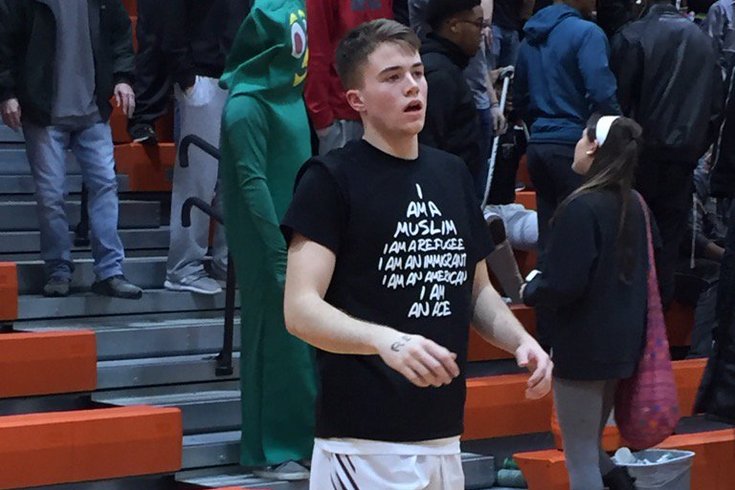 For the third straight game, members of the Lower Merion High School boys basketball team donned different warm-up shirts on Tuesday night prior to facing Strath Haven for the Central League title. On Sunday, the Aces beat Penncrest at the buzzer to advance to the championship game.

In a show of solidarity -- and as a way to explain why some players knelt during the national anthem -- the team wore all-black shirts that featured white writing in the shape of a spade. It read: "I am a Muslim. I am a refugee. I am an immigrant. I am an American. I am an Ace."

Josh Verlin, founder of cityofbasketballlove.com, was covering the game and snapped the following photo:

Lower Merion, the alma mater of former Lakers star Kobe Bryant, went on to capture the Central League title easily, 82-60. After the game, the team explained its decision to make a statement. Here's more from Verlin:

The shirts were designed by LM senior Najja Walker-X, who along with senior Terrell Jones had sat down during the national anthem for several games, starting a trend where several other Aces joined them as the games went on. But they didn’t feel that message they were trying to get across was clear enough, and so along with input from the rest of their team, the Aces debuted the shirts last Tuesday.

“We had to come together as a team to find a way to spread the message to everybody without them having to go through the coaches to know what’s going on with us,” he said.

“I think it’s neat, we had a long discussion about it and that was what they came up with,” [head coach Gregg] Downer said. “I support it 100 percent.”  [cityofbasketballlove.com]

The shirts, which are being sold for $10 each with proceeds going to the ACLU, aren't going anywhere. As long as Lower Merion's season continues, Walker-X says the team will continue to wear them.

So why would a group of high schoolers, in the midst of a playoff run, decide to take a political stance, you ask?

“People’s lives are bigger than a ball going through a hoop,” he told Verlin.

The team also released an extremely well-written statement, which we're reposting here in its entirety (courtesy of City of Basketball Love):

“What’s beautiful about America is that everyone is different. And whether we are black, white, brown, orange, yellow or red, it is our legal right to express our opinions and beliefs. In the last few weeks, our team has been criticized by a few people because some of us choose to sit and others choose to stand for the national anthem. We have not been unified on the issue and we realize we may never be. That is OK. We are free to disagree and have different points of view. We are free to express our first amendment rights.

“What we do want to convey, however – as a full team – is that no matter where you come from, no matter who you are, you should be welcomed, respected and heard. As a team we believe in fighting for the rights of all – protecting, defending and giving voice to those who feel marginalized, who live in fear, and who face injustice. We recently met and decided that the best way to express our views on what concerns us about what’s happening in the world is to show a unified front and to wear a t-shirt with a message. Our t-shirts tonight say:

“The goal of this message is to be inclusive and representative of people of all backgrounds and emphasize that we are all in this together. That no matter who we are and where we’re from, we are all ‘Aces.

“Lastly, we want to make clear our respect for those who serve and have served our country defending freedom and liberty. We are forever grateful for your contributions.

“Thank you for your consideration and enjoy the game.”  [cityofbasketballlove.com]

So far, reaction to the shirts have been positive. And now, especially given the way in which Walker-X and his teammates explained their motivations behind wearing the shirts, there's a good chance that continues.

This is, by a wide margin, the best thing to ever come out of Lower Merion's basketball program https://t.co/FNH8zPTZAh

Lower Merion always sucked, then they go and do something cool https://t.co/DgcKJMxjqE

Original story was updated following the conclusion of the game.