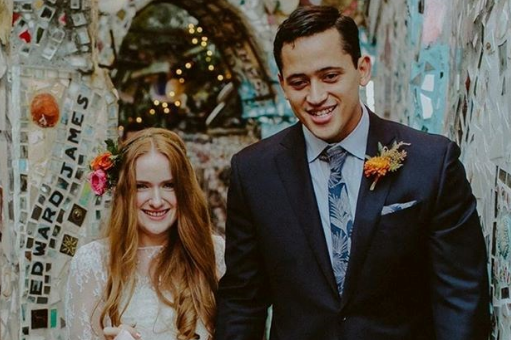 Lillie Williams and her husband, Jonatan Palacios. Palacios was detained by ICE officials in May in Lower Merion on an outstanding deportation order. Williams is seeking money to help pay for her husband's deportation case.

A suburban Philadelphia police department is attempting to set the record straight regarding the arrest of a man by federal immigration authorities.

Lower Merion police said in a statement Friday that, despite social media outrage, it did not assist ICE in detaining Jonatan Palacios, who allegedly locked himself in his car after being approached by federal agents.

The incident in question occurred on the morning of May 11, when Palacios was seen by ICE agents exiting his apartment building near the Haverford train station, police said.

Palacios, identified by Philly.com, is a 27-year-old Honduran national who married a U.S. citizen in 2014. He filed a petition for U.S. citizenship in October, and that paperwork is pending, his wife told the website.

Agents went to speak with him, but he immediately went into his vehicle and locked the door, according to authorities.

ICE agents contacted Lower Merion police to inform them of the situation, but after doing so, Palacios' wife convinced him to exit the car and he was taken into custody by ICE without incident, police said.

Lower Merion police maintained that they were unaware of ICE's intent to arrest Palacios prior to being contacted by the agency and had no involvement in detaining him other than being present during the incident.

Palacios' wife, Lillie Williams, said in an email to PhillyVoice that the department's account of the incident was "somewhat inaccurate." She said that she was still in their apartment when Palacios entered the car, not walking down with him as police said.

Williams disputed the claim that Palacios went into his car after seeing the ICE agents, claiming that he was already in his vehicle when the agents approached, and he "simply remained inside."

She also claimed that although Lower Merion police were unaware of the situation initially, ICE agents tricked her and her husband by telling Palacios that once police arrived, they would break open his car window. The threat was why Williams told Palacios she didn't think he had a choice but to come out, she said. 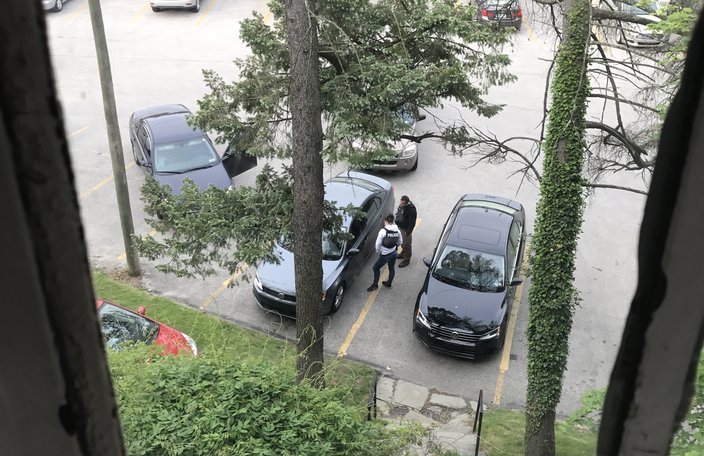 Lillie Williams says she took this photo of her husband Jonatan Palacios being approached by ICE agents in his car.

As Philly.com noted, a Lower Merion "Hate Has No Home Here" Facebook group said that the arrest happened "apparently with the help of the LMPD," adding that Palacios was a "neighbor" who had "made a life for himself" in the community.

Palacios' wife, Lillie Williams, has set up an online fundraising campaign to help with the legal fees in her husband's deportation case. So far, it has raised more than $6,000 of a $7,000 goal.

Philly.com reported that Palacios had missed a court date after coming into the country as an unaccompanied minor, so a judge issued a deportation order for him in 2008.

A hearing in his deportation case has been scheduled for August, according to the website.

This story was updated on June 5 to include comments from Lillie Williams, who disputed parts of the police account of her husband's arrest.