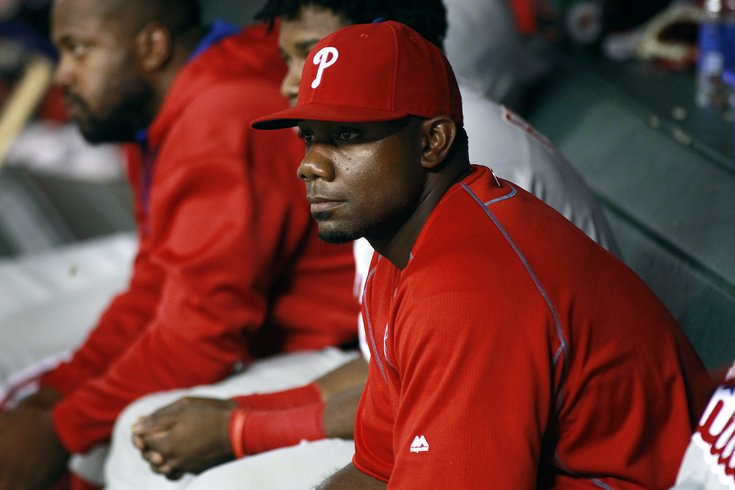 You can certainly make the argument that Ryan Howard hasn’t had a peaceful offseason in at least five years.

From the career-altering Achilles’ injury in October of 2011, the setbacks, and the multi-year recovery, to the legal battle with his family over his career earnings last winter, to having his name thrown into the latest PED scandal smearing the sports world shortly after Christmas (and his firing back with a lawsuit), you couldn’t blame the man for packing up his bags and walking off into the sunset having earned a very handsome salary, a World Series ring, an MVP trophy and accumulating plenty of other honors over the first half of his career.

With the Phillies less than a month away from their first official workout of the 2016 season, we’d like to tell you we come bearing good news, Ryno. Instead, you probably better be prepared with the possibility of being a part-time player.

Phillies manager Pete Mackanin was more than candid on Tuesday afternoon talking about the “difficult situation” he’ll walk into next month when spring training starts and likely begins a period of time when the first-year manager will determine whether he still believes Howard is capable of playing against left-handed pitchers.

With Howard’s rapid decline in production as an everyday player – and perennial reserve and right-handed hitting Darin Ruf’s success against lefties – the Phillies would appear to have the makings of a natural platoon.

“My challenge to all those guys – in fact, to everybody (on the team) – is that if you want to play, you’ve got to hit better,” Mackanin said Tuesday afternoon at Citizens Bank Park, where he spoke to the media for the first time in 2016. “You’ve got to play better. If you want to play every day, you have to show me you can play better, you can hit better. That determines a lot. If you show me you can’t, or you’re not hitting better, than you’re not going to play.”

If you take that quote and carry it over to any anonymous player in any sport, it surely sounds like common sense. If you don’t perform, you don’t play. You can surely make the argument that it’s common sense for the Phillies, too.

But the organization has been reluctant to move Howard to the bench on a more regular basis in the last two seasons despite his decline. It might have something to do with the $25 million they owed him in each of those seasons.

The Phillies are under new leadership at nearly every level in 2016, though. From Mackanin to the role above him, general manager Matt Klentak, to the man above him, team president Andy MacPhail, and even a the much more vocal presence in the man above them all, ownership partner John Middleton, there have been franchise-shifting changes everywhere in the last six months or so.

There is probably less resistance than ever in playing Howard less often. And there’s also this: the 2016 season is the last guaranteed year of his contract. After paying him $25 million this season and cutting him a $10 million check in November (the buyout clause in his contract), the Phillies will be finished worrying about Ryan Howard.

Sure they’ll invite him back for an eventual reunion of the 2008 champions (a 10-year anniversary in 2018?) and to get his rightful place onto the Wall of Fame. But in less than 10 months they will not have to worry about finding a place for him in their lineup or on their roster.

Still, the Phillies are careful with egos and respectful of their former stars, thus Mackanin’s characterization of it being “a difficult situation.”

“It’s going to be a difficult situation,” Mackanin said. “But decisions have to be made, and we have to do, in my opinion, I have to do what I think is best for the organization and best for the team and that’s where we’re at.”

Since the beginning of the 2012 season, Howard has hit .184 against lefties with 22 home runs and 194 strikeouts. Over that time, a whopping 44 percent of his at-bats against left-handed pitchers have ended in strikeouts.

In the other corner is the 29-year-old Ruf, seven years Howard’s junior.

In 2015, Ruf had a 1.107 OPS against left-handed pitchers. Among the 224 major league hitters with at least 100 plate appearances against lefties, no player had an OPS superior to Ruf’s (Seattle’s Nelson Cruz also had a 1.107 OPS).

As for Howard among the same group of 224 major league hitters with at least 100 plate appearances against lefties? His .418 OPS ranked 224th.

“I’m going to make that decision in the spring,” Mackanin said when asked how he viewed the first base position going into camp. “But at this point in time, like I said, I’m going to have a discussion with Ryan and I’m going to tell him that if you want to face lefties you’ve got to hit them better. If you don’t hit them better, I’m going to platoon. It’s basically what we’re looking at. It’s gotten to that point.

“And if it comes to that I think it could be helpful to Ryan and to Darin Ruf. Once again, it’s hard for me to justify not playing someone who led in OPS in the major leagues against left-handed pitchers and that’s Darin Ruf. It’s hard for me not to play that guy when I’ve got that guy sitting there to try to win games.”

Mackanin went on to say that extra rest could also benefit the now-36-year-old Howard much as he felt it did with fellow ’08 alum Carlos Ruiz last season. Although he began the season as the Phillies everyday catcher, Ruiz started just 31 of the team’s final 83 games in the last three months of the season.

Just as Ruiz at the very least began sharing the position with Rupp in 2015, it would appear that the time is finally coming in 2016 for Howard to sit far more often, too.

PHILL-INS: With less than a month before pitchers and catchers report to Clearwater (Feb. 17), Mackanin penciled in four names for his starting rotation: veteran newcomers Jeremy Hellickson and Charlie Morton and young right-handers Aaron Nola and Jerad Eickhoff. “I don’t want to etch anything in stone, but Nola and Eickhoff certainly have made great impressions, at least to me,” Mackanin said. “So I would think they’d be in the rotation somewhere.” Others competing for the fifth spot are likely to include right-hander Vincent Velasquez, left-hander Brett Oberholtzer (both from the Ken Giles trade), left-hander Adam Morgan, and right-hander Alec Asher. … Aaron Nola will be a guest reader at St. Monica School in South Philly today as a part of the Phillies “Be a Phanatic About Reading” program. Later, Nola will be available during at autograph session at Citizens Bank Park’s Majestic Clubhouse Store (5:30-6 p.m.). … One more feature on tap for tomorrow in the team’s weeklong “Back in Town” campaign: outfielder Aaron Altherr will chat with fans from the Phillies twitter account at 5 p.m.