Mailbag: How concerning are the Eagles' recent slow starts? 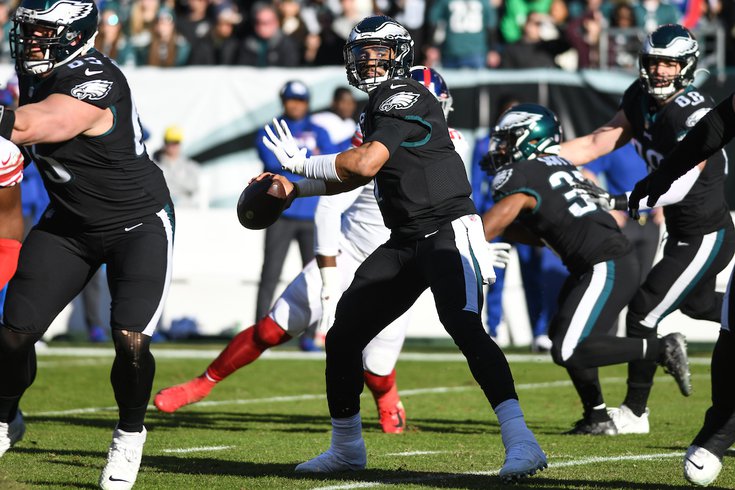 Question from greenwithenvy: Do you think the Eagles can play one half of good football again and still beat Washington a second time?

There's a good argument to be made that the Eagles have gotten out to bad starts in each of their last four games.

That is a trend that needs to be squashed, and especially in this matchup again Washington, who have been a mess the last three weeks.

Washington is still mathematically alive in the wildcard hunt, but if there's a team begging for the offseason, it's them. The Eagles need to play well from the opening kick, and not give this free-falling team a reason to care.

Question from EFNJ: If Jordan Howard is out on Sunday, are there any practice squad running backs you’d take a flier on for rest of the season?

The Eagles tipped their hand on Saturday that Howard was likely to play when they didn't elevate Kerryon Johnson or Jason Huntley from the practice squad to the active roster, but in case anyone missed this report this morning, Howard is expected to be a go:

Eagles’ running back Jordan Howard, listed as questionable for Sunday due to a stinger, is expected to play vs. the WFT, per source.

I know that doesn't exactly answer your question, but there you go.

Question from Beiler: If Minshew wants to leave this offseason to go to a team that gives him an opportunity to start, would you let him go? For what compensation?

I think that if you're a quarterback needy team this offseason, Minshew isn't going to be at the top of anyone's wish list. However, I can see a quarterback-desperate team maybe making a move for him, say, if their starter went down in-season next year. Maybe the Eagles could siphon off a high Day 3 pick? That's about the most I think they could hope for.

Question from Norm Snead: Is there a QB currently playing with 0 to 2 years experience that has played better than Hurts?

Yes. I think if we're comparing Hurts to his draft class, which is the apples-to-apples comparison, Joe Burrow and Justin Herbert for sure have played better. Tua Tagovailoa has started to figure some things out, but I would take Hurts' body of work over Tagovailoa's. That one is close, though. We haven't seen much of Jordan Love so far, but in his lone NFL start he was not impressive.

No quarterbacks selected after Hurts in that draft have given any compelling reason for optimism.

Question from Dallas Goedert: They spent an awful lot of time and energy trying to explain why I wasn't thrown to on the play that I was all alone in the end zone. So does that mean any time there is a broken coverage and a guy is wide open, if he was the pre-snap read and they didn't get the look they wanted at the snap, but he breaks wide open, they shouldn't throw to that wide open guy?

I thought the explanations given by both Nick Sirianni and Jalen Hurts on that play were perfectly reasonable. Sirianni first:

"I thought he went to the right place with the ball. I know there is a question about... a red zone play that we threw to Quez over the middle.

"Our alert was to Dallas versus a certain coverage. It wasn't that coverage, so now we read shallow to angle. That's what he read, so his eyes aren't there, so I'm not one bit concerned. When you give a quarterback, and you say to him — when you know their reads as a coach you don't ever get on them when he misses something like that because it's not a miss. His eyes went here to here and Dallas is only a pre-snap read.

"Again, he didn't play his best first half and when he plays good, the offense rolls, and he did a great job bouncing back that second half."

“Well, put the play in and we’re respecting ‘seven bracket.’ So basically, McKinney from Alabama, he’s bracketing Reagor and they’re playing kind of in-and-out, right? But they’re in quarters, Cover 7. So, have to find the single, maybe. But in that play, what I was coached to do is go through it as a pure progression. Work the shallow to the running back coming, only throw that against a certain look. My shallow popped and McKinney fell off and shot through the ball after I threw the ball, so McKinney made a really good play and they busted the coverage back side, so he was wide open over there.

"So, my pre-snap look did not give me what I wanted, to throw the corner to Dallas but definitely looking after the fact, it’s easy to say, ‘Throw him the ball,’ but you’re going to miss some like that, you know? As a quarterback, you want to play on schedule and get the ball out on time and try your best to do that. Just trust your preparation and your reads and your progressions and you’re going to have guys that pop, but you have to try to stay on schedule and do those things. Those happen.”

So I guess the counter-questions I would have is, do you want Hurts to keep looking at Goedert in the back corner of the end zone when the opposing defense shows a look pre-snap that says he is unlikely to come open, hoping that a defender screws up? Or would you rather him continue in his progression and look at other options that are more likely shake free?

I think that what some fail to realize at times is that the quarterback's vantage point of the field is a lot different than the viewer's at home. We get an aerial view of the field, and can see every receiver without having to look right or left. Same thing with the NextGen dots that represent players on the field. It's easy to look at your laptop from your sofa and go, "THAT DOT IS OPEN!" but the reality is that even the best, smartest, most seasoned quarterbacks like Tom Brady, Payton Manning, etc., don't always see every open receiver.

I do believe that at times Hurts has had receivers open and has been hesitant to pull the trigger, and it's area of his game that needs improvement, but on that particular play the explanation on why it didn't go Goedert's way makes sense.

Question from Hmmm: If the Giants keep Jones and Judge as rumored and WFT sticks with Heinicke next year, would you say that the Eagles have the second best HC/QB combo in the division outside of Dallas?

I doubt Washington rolls with Heinicke next year, but yes.

Question from GoBirds: Have we looked back at the draft pick value for the Dolphins trade? What pick would it have to be this year for that trade to be “even” based on the picks?

Question from Bock: What are your thoughts on Doug Pederson possibly going to coach in Jacksonville?

I'd love to see it. Doug deserves another shot, and I think he'd be good for Trevor Lawrence and that organization.

Question from Alex: Is Ron Rivera the most overrated coach in the league? He’s been a head coach for 10 years and has 3 winning seasons.

I took a look at some preseason NFL coach power rankings, and in the ones I found he was ranked 13th, 16th, and 17th. So, roughly a little better than middle of the pack, on average. He had a few great seasons in Carolina, particularly the one where they went 15-1 and made it to the Super Bowl, and he has a winning record overall (89-81-1).

He's a likeable person, which maybe helps the perception of him as a coach, but I do think his even demeanor is a good fit for a train wreck franchise like Washington. I don't think he's special, but he's a stable coach, and appropriately rated.

Question from Poop McGee: We just saw Lane catch a TD pass. Will the fans ever get their wish and see Jordan Mailata get a goal line rush?

Minnesota just did it with their gargantuan Australian OT:

Minnesota brought in the big man to score 🤯