The Birds can punch their ticket to the postseason on Sunday, but they'll need more than just a win over Washington. 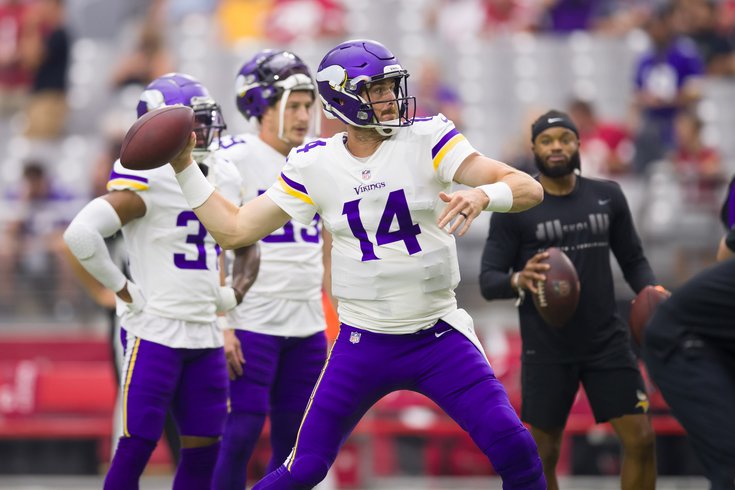 Because Kirk Cousins is an unvaccinated dork, the Vikings' playoff hopes will ride on Sean Mannion.

And so, each week we'll lay out a rooting guide for non-Eagles games on the NFL schedule, and yes, I'm aware that most of the below is obvious. You can also check out the latest Week 17 odds and read all my picks, here.

The Eagles can clinch Week 17

It's kind of wild to think that the Eagles can clinch a playoff berth Week 17, and potentially rest starters Week 18, but that's where this season has gone, amazingly. The following three things would have to happen:

The way the schedule is set up, the Eagles play Washington at 1:00 p.m. EST, 49ers-Texans and Panthers-Saints will both occur during the late afternoon games, and Vikings-Packers is on Sunday Night Football. That means that Eagles fans can potentially watch each of the dominos fall one at a time.

Obviously, Eagles fans should be rooting for the 49ers, Panthers, and Packers.

• Cardinals at Cowboys: In the event the Eagles don't clinch Week 17, they may need a win Week 18 over the Cowboys to get into the playoffs. If the Cowboys lose to the Cardinals on Sunday, they cannot get the 1 seed in the NFC. There would still be playoff seeding on the line for them Week 18, but if Dallas determine that resting starters is more beneficial than the difference between the 2, 3, or 4 seeds, the Eagles could catch a break by getting to play the Cowboys' backups.

As you're aware, the Eagles own first round picks from the Dolphins and (now almost certainly) the Colts in the 2022 NFL Draft.

A huge game for the Eagles' draft positioning this week is Dolphins at Titans, for two reasons:

A Titans win would help the Eagles quite a bit, and then of course a Colts' loss to the Raiders would also be ideal.

• If the Dolphins lose, another AFC team would have to capitalize in order to knock Miami out of the 7 seed. As such, it's ideal if the following teams win:

• Falcons at Bills: If the Eagles beat Washington on Sunday, they will definitively finish second in the NFC East, which means that they will have a second-place schedule in 2022. The Falcons can still finish ahead of the Saints in the NFC South for second place behind the Buccaneers. Since Atlanta will very likely be an easier opponent than the Saints next year, you should root for the Falcons.

• Giants at Bears: The 4-11 Giants are going to own two picks in the top 10 in the 2022 NFL Draft — their own, and the 5-10 Bears' pick. If the season ended right now, the Giants' own pick would be fifth overall, while the Bears' would be eighth overall. It's probably best if the Giants do more damage to their own pick, which still has a decent chance of landing in the top 3 or 4.

By the way, do you guys smell that? It smells a little tanky in here:

Joe Judge would never do anything to disadvantage his team from winning in any way whatsoever, though, so I'm sure that's all on the up and up.

• Buccaneers at Jets: It's best if the Jets lose, and stay ahead of the Giants in the draft order.

• Lions at Seahawks: Though maybe there's some risk of the Lions winning their final two games (unlikely with the Detroit playing the Packers Week 18), it's probably best if Seattle loses this game, which would keep them in front of the Bears pick owned by the Giants.

Hard to care much about these games