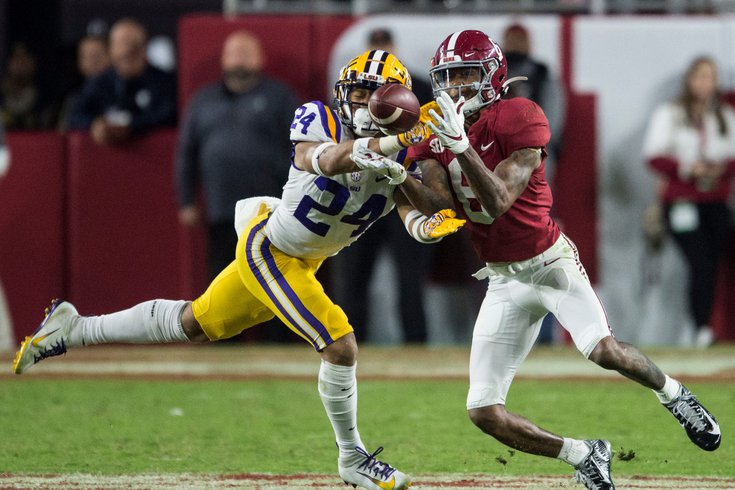 LSU CS Derek Stingley (24), and another guy you might recognize.

Ebiketie is an import from Cameroon who originally enrolled at Temple, where he didn't play much in his first two seasons, but had 42 tackles, 4 sacks, and 3 forced fumbles during the COVID-shortened 2020 season. He transferred to Penn State in 2021, and had 62 tackles (18 for loss), 9.5 sacks, 2 forced fumbles, and 2 blocked kicks in his lone season with the Nittany Lions.

He has a nice assortment of pass rush moves and great bend for a player thought to be early in his development. There are no cheapies in the highlight reel below:

In the pros, he's going to have to improve his run defense to stay on the field for all three downs, but for now, he possesses the more important ability, which is creating disruption and getting to the quarterback.

In a loaded pass rusher draft, Ebeketie is likely to be a Day 2 guy.

(To note, Ebuketie opted out of this game to prepare for the draft.)

Williams is pound for pound one of the best tackle-breaking running backs in the nation. Whether he's breaking defenders' ankles with combination jukes, or simply staying on his feet through contact because of his outstanding balance, Williams is almost cat-like in his running style, and very fun to watch.

Williams is also thought of a tough, willing participant in pass protection, and he has receiving chops, with 77 receptions over the last two seasons.

On the downside, Williams isn't likely to run a fast 40, and you can see defenders catch him when he gets into the clear. Williams has rushed for a lot of yards over his career at Notre Dame, but his yards per carry aren't super impressive (for a top college prospect).

Each year, the Eagles tend to have to dig deep into their running back depth, and Williams could be a more complete replacement for a guy like Boston Scott, who is scheduled to become a restricted free agent this offseason.

Back in September, Oklahoma State head coach Mike Gundy said that Sterling was done for the season with a hand injury. But, nope. After missing eight games, Sterling returned to action in November and played in OK State's final two games.

In the two previous seasons, Sterling had a combined 144 tackles, (19 for loss), 2 sacks, 3 INTs, and 12 pass breakups. He is an instinctive, intelligent safety, who clearly loves to play:

"He told our coaches on the sideline that if they run that route again, I'm going to step underneath it and run it in for a touchdown" pic.twitter.com/Pt0bUkZdIT

Sterling is a late round guy who is perhaps being slept on a bit.

Pitre is a versatile defender who can play safety and slot corner, and who was all over Baylor's stat sheet in 2021. He had 17.5 tackles for loss and 3 forced fumbles, which would both be impressive for a defensive lineman, to go along with 7 pass breakups and 2 INTs. Here he is against Oklahoma this season:


Pitre is the type of defender who makes it easier on defensive coordinators to disguise coverages and show an assortment of defensive looks. He could be what K'Von Wallace has yet to show so far in his two years with the team.

MORE: Rounding up the experts' predictions for Eagles vs. Washington | Eagles at Washington Football Team: Five matchups to watch

By popular request, we'll finally cover Stingley, who was a freshman during LSU's dominant national title march in 2019. He racked up 6 INTs and 15 pass breakups that season, both of which led the SEC. In 2020, he didn't get as many hands on passes, because he has battled some injuries, and opposing offenses stopped throwing his way. In 2021, Stingley only played in three games, and his season ended in early October when he had a medical procedure on his foot.

As a prospect, Stingley has everything you want in a CB1 — size, speed, ball skills, technique, and confidence. His freshman season was so impressive that it has kept his draft stock high despite being out of the spotlight for a couple of years.

Stingley could be the next corner taken top 5 in the NFL Draft. A look at the corners drafted top five over the last 25 years:

The hit rates on those players are high. Woodson is in the Hall of Fame. Ramsey is the probably best cornerback in the NFL right now, and Ward is easily within the top 10. Peterson has racked up 8 Pro Bowls, and 3 All-Pro nods, and is in his 11th year in the league. Newman, Jammer, and Springs all played at least a decade in the NFL. The only questionable players on the list above are Okudah and Westbrook (poor Lions), who had serious injuries early in their careers.

When the Dolphins were 1-7 earlier this season, Stingley looked like a possibility for the Eagles. Now? Probably not, but it will be interesting to see if / how much his stock falls, given that he hasn't been a playmaker since 2019, and now has an injury history that has to be evaluated. If Stingley were to fall far enough, maybe he's a trade-up candidate?