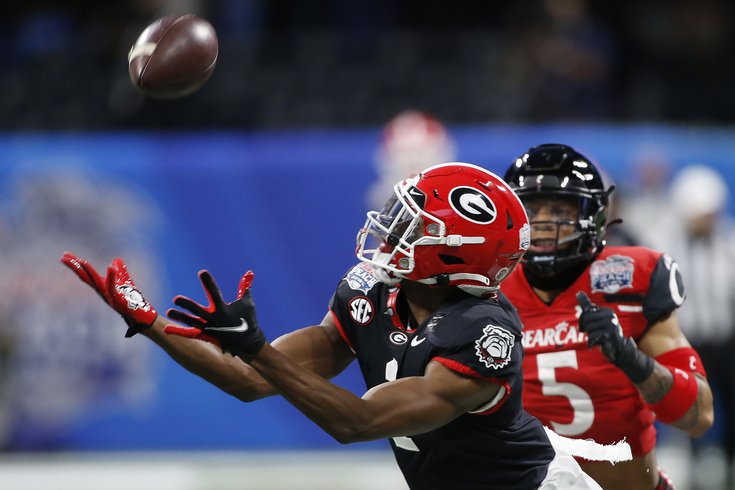 Georgia WR George Pickens could be a good value on Day 2.

That's about where the comparisons to Andre Dillard end. Lucas has great length, at 6'7, 319, with long arms, and he's a brick wall against power rushers, though he doesn't have anything close to Dillard's athleticism. Lucas has been a four-year starter for WSU at RT, and that's where his future is in the NFL, with maybe some potential to also kick inside to RG. Over his college career, Lucas has been a model of consistency. A quick taste:

While his athletic attributes aren't exciting and his appeal to the Eagles will be tempered because of his lack of versatility, he does make some sense as an eventual successor to Lane Johnson, and would come at the relatively low cost of a third- or fourth-round pick.

Raimann was a foreign exchange student from Austria who played wide receiver in high school, and enrolled at Central Michigan as a tight end. He has a fun backstory, as chronicled by Dane Brugler of The Athletic.

In his first two collegiate seasons, he had 20 catches for 164 yards. Prior to his junior season, he moved to left tackle, basically because Central Michigan didn't have one. He has since flourished in that role. Here he is against LSU this season:

A player like Raimann makes sense as an eventual long-term successor to Lane Johnson who can serve as a swing tackle in the short-term. While he has only played left tackle, Raimann has shown that he is a fast study, and could also learn to play on the right side.

Is that type of player profile worth a first-round pick? That's debatable, but obviously, the Eagles place a ton of value at offensive tackle.

Ford is a transfer from Alabama who broke out in 2021, carrying 200 times for 1238 yards (6.2 YPC) and 19 TDs. If he declares for the draft, I'll be curious to see what he officially weighs in at, because he doesn't look like he's 220 pounds, as listed on Cincinnati's website.

If he's legitimately 220 pounds, he has impressive long speed for a player that size, and could be a late Day 2 guy. If not, he's still an attractive prospect with a nice combination of balance, vision, and speed. A highlight reel:

One draft strategy that I think makes some sense is taking running backs most years on Day 3, because (a) there's good value there, and (b) the Eagles tend to reach deep into their running back depth chart for meaningful snaps every year.

Pickens is an outside receiver with nice size, who has all the tools you're looking for in an X receiver. He has the athleticism to separate, he's physical against press coverage, and he wins contested catches. He also has the flair for the spectacular catch, as evidenced here:

However, Pickens also comes with some injury concerns. He tore an ACL in March, though he impressively recovered in time to appear in Georgia's last two games.

Pickens put up good numbers as a true freshman, and then of course 2020 was cut short due to COVID. As noted, he missed almost all of 2021 with the ACL tear:

Ideally, if you're going to take a wide receiver high in the draft, you'd like to see eye-popping numbers, but in Pickens' case, any team that takes a swing on him early will be drafting him on tools and potential.

The Eagles are willing to take shots on injury-concern players in the second round, as they have shown with Landon Dickerson and Sidney Jones. If they don't invest in a wide receiver in the first round for the third consecutive year, Pickens could be a high upside play in Round 2, if he declares.

In a Georgia defense packed with NFL talent, Walker is a player who has flown under the radar a bit. The first thing that jumps out about Walker is his size. At 6'4, 240, he has good length to affect passing lanes, and he can match up against bigger tight ends.

He also possesses ideal athleticism to cover, and to run sideline-to-sideline against the run. But my favorite attribute of Walker's is his willingness to take on opposing offensive linemen, and shed their blocks with his violent hands. He is a three-down NFL linebacker, in my opinion, who could go Day 2.