Eagles vs. Washington: Predictions, betting odds and more for Week 17 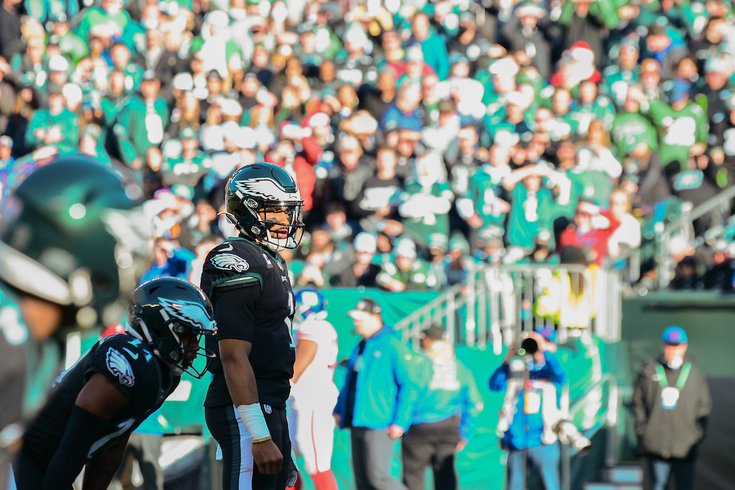 It seems like just a couple of weeks ago when the Eagles faced off against Washington at the Linc with a ton on the line in terms of playoff positioning. But that can't be right, can it? Nope, it was actually less than that.

The Eagles beat Washington in Week 15, and now the two teams will play again — this time in Landover, Md. — just 12 days later as both teams continue to trend in opposite directions. When they first met last week in that COVID-delayed Tuesday night game, a win put the Birds ahead of their division rivals in the NFC wild card race. Then, last week, the Eagles put further distance between themselves and Washington with their win over New York (coupled with a Cowboys beatdown of the WFT on Sunday). Now, Philly can put the final nail in Washington's coffin with a road win against a much healthier opponent.

As of right now, Washington is in far better shape than it was the first time around, especially in terms of COVID-19 absences. It appears the Birds won't be facing Garrett Gilbert this week either, as Taylor Heinicke will get the start — although Ron Rivera mentioned that his team will be playing multiple QBs on Sunday as they continue to give Kyle Allen a look despite them technically not yet being out of the playoff race.

The Eagles, meanwhile, already know they'll be without Miles Sanders and have now seen Jordan Howard pop up on the injury report as well. With him practicing on Thursday that's a good sign he'll be back on Sunday. And, of course, Jalen Hurts' ankle should be getting healthier each week, allowing the second-year QB to take advantage of his strongest asset — his ability to escape pressure and run with the football, something that was clearly missing in the Eagles 27-17 win back in Week 15.

So, how do our writers see this Eagles vs. Washington matchup playing out? After a few consecutive weeks of everyone being in lock-step (and getting their picks right), has anything changed ahead of an important division matchup for Philly as they look to hold off the teams chasing them for that final wild card spot?

The Eagles have some injury concerns at running back, as Miles Sanders was already ruled out for Sunday, Jordan Howard feels unlikely to play, and Kenny Gainwell is dinged up. Still, the Eagles' offensive line absolutely owned Washington Week 15 on their way to 238 yards on the ground and 519 yards overall.

How did Washington respond with their playoff hopes on the line? By getting absolutely embarrassed on Sunday Night Football by the Dallas Cowboys, 56-14, in a game that the Cowboys racked up 389 yards in the first half.

The Eagles had a rough start against the Giants last Sunday, and they were lucky to have the opportunity to shake off the cobwebs in the second half when a better team might have buried them early.

But ultimately, this Washington team is in disarray, as a literal fight broke out on the sidelines in their blowout loss to the Cowboys:

Additionally, it's worth noting that Washington plans on playing two different quarterbacks, which is just weird.

Everything is pointing toward an Eagles win in this one, and certainly I'm picking them to win, but skepticism is warranted after their first half against the Giants last Sunday.

I feel closer to picking the Eagles to lose this week than I have in over a month. And that’s only because the Eagles have struggled in their last two games and, mostly due to their opponents being god awful, they were able to collect themselves to pick up much-needed wins thanks to strong second half performances.

While Washington was one of those two teams, this version of that squad should be a little better with a bunch of guys returning from injury and the COVID list. However, I still can’t see Philly losing to this Washington team, even if it’s at full strength. The Eagles running game could rely on Boston Scott and Kenny Gainwell this week with their top two runners potentially each on the shelf, but it won’t matter, their offensive line is mega talented. I don’t see a double digit breeze in the second half but I do see the Eagles getting to 9-7.

I came really close to picking Washington on Sunday, with the thinking being that the Eagles simply aren't good enough to finish the season with five straight wins and were due for a letdown — like we saw against the Giants during their first meeting — at some point. And if they come out as flat as they did in both games last week, then winning against a better QB than Garrett Gilbert or Jake Fromm/Mike Glennon is a tricky proposition.

However, both of those starts could've just as easily been the result of external forces — a long delay before the rescheduled Washington game followed by a quick turnaround that included Christmas before the Giants game. And now with a more regular week (at lease as regular as things can be in 2021) to prepare, the Birds won't have any excuses for yet another slow start.

But, as we all know, it's not about how you start but about how you finish, and the Birds have been finishing extremely well in recent weeks. Look for that to continue as the Eagles once again dominate in the trenches against a Washington team that sounds like it's already looking ahead to the offseason.

Another week, another matchup against a mediocre-or-worse quarterback for the Eagles. Their record against teams with questions in the passing game is nearly pristine this year, and though Washington should presumably be a bit healthier than they were for Tuesday Night Football, the Eagles are right on the doorstep of the playoffs, and will likely come into this game with plenty of juice as a result. And hey, if they start out looking like crap on offense again, Jalen Hurts and Co. have more than proven their ability to adjust and dominate second halves.

The Eagles are the best of a bad situation in the NFL, and that’s the proliferation of mediocrity throughout the league. The Eagles are 6-2 since they were 2-5 after losing in Las Vegas. The Eagles' six wins have come over the Lions, Giants, Washington Football Team, Saints, Broncos and Jets. Combined, those teams have a 30-59-1 record, for a .333 winning percentage. Not one is over .500. In fact, the Eagles haven't beaten anyone over .500 this season.

Their 8 wins have come against teams with a combined 42-77-1 record for a .350 winning percentage. The Eagles will continue to feast on the dreck of the NFL and beat a relaxing Dallas team on January 9th.

Reality comes back the weekend of January 15th, when the first round of the playoffs begin.

Absorb the magic while it lasts, because the exposure of who and where the Eagles truly are is coming. What we know is that the Eagles are better than eight teams with a combined 42-77-1 record. From Weeks 8-16, the Eagles' defense "suddenly" improved. They're fifth in opponents yards per game (320.2), fourth in three-and-out rate (35%) and 12th in points per game (21.2). After facing Tom Brady, Justin Herbert, Dak Prescott and Patrick Mahomes, they were 24th in the NFL in points allowed per game (26.53) and 28th in first downs allowed per game (23.9).

Let's strike up a success season banner for that.

Take the time to inhale another winning Eagles' Sunday. There won't be many more ahead in January.

The Eagles are one of the hottest teams in the NFL and Washington is a mess. The Birds are celebrating each week on the sidelines while the WFT is fighting each other. Nothing about the line at PHI -3 or -3.5 makes any sense, outside of the Eagles dealing with significant injury to Hurts and the RBs. I don’t think the former is the case and Hurts will play through the ankle injury. I hope the Eagles find a way to win this game and will be rooting for them, but I actually think the WFT steals this one. The Eagles are still young and may not fully grasp the moment they are in until it’s too late. We’ve seen them play with fire in awful starts to games, plus it’s hard to sweep anyone in the NFL. Love the Birds, just not this week.

All of a sudden thoughts of the playoffs are more reasonable than not for the Eagles and by late Sunday night, Philadelphia could punch its ticket to the dance. A number of things have to happen but Green Bay over Minnesota is very likely, and one of two other dominos: San Francisco topping Houston or New Orleans losing to Carolina is almost certainly going to fall. That leaves just one other lever: the Eagles taking care of their own business and beating a Washington Football Team drowning in adversity.

Whether it was the recent COVID issues, the off-the-field tragedies involving Montez Sweat and Deshazor Everett, or the in-fighting between Jonathan Allen and Daron Payne, WFT head coach Ron Rivera certainly has his hands full trying to keep his team fighting to the finish line with a negligible 7% shot in the dark of making the postseason.

For the hand-wringing Eagles fans, the worries are the standard tropes of playing a division foe twice in 12 days, the fact that Washington will fight hard after being embarrassed by Dallas, 56-14, last week, and the realization that while Tyler Heinicke and Kyle Allen aren't Joe Theismann or Mark Rypien at quarterback, they are more competent than what the Eagles just saw in Garrett Gilbert.

When you throw all of that into the hopper maybe it's a little more difficult than some might expect, but the Eagles should pull away late.