Mailbag: Should the Eagles try to salvage Sidney Jones, or trade him this offseason? 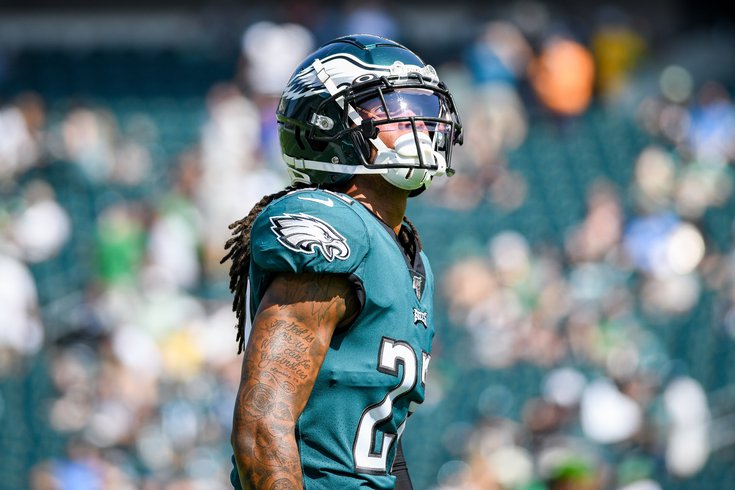 Question from Geff: Why rush to get rid of Sidney Jones? He’s under contract and restricted b/c of the missed year and in the event there’s a new defensive staff why not let them work with Sid?

They’re certainly not going to cut him. They’d bring him back to training camp at his cost before they did that.

However, if there’s a team out there that liked him as a prospect a few years ago and they’re willing to trade, say, a 5 or a 6 for him, I think that could be a decent resolution for all parties. The Eagles get a pick, Jones gets a fresh start, and his new team gets a chance to develop him.

I realize that Jones made a nice play in his one snap last week, but the reality is that he has undeniably under-performed in his two post-Achilles years in Philly. Hell, he’s the seventh cornerback in the pecking order right now, he has been a healthy scratch for several games, and I don't think Jim Schwartz is going anywhere.

Question from Bob: In retrospect, was drafting a backup TE with the Eagles’ first pick in the 2018 draft a poor use of resources?

Going back to 2018, I had published the Eagles’ top 10 options with their first-round pick. As it turned out, a combination of options No. 1 (trade out of the first round) and No. 7 (draft Dallas Goedert) happened. At the time, it was clear that they were going to draft a tight end at some point, as Brent Celek had retired, and Trey Burton had left in free agency.

Leading up to the draft, many viewed Goedert as a first-round talent. Solely speaking in terms of the quality of player, I thought he was good value at pick No. 49. Of course, they also got a second-round pick in the 2019 NFL Draft for moving back, which they used to select Miles Sanders. On the whole, I think that a combination of Goedert and Sanders was a good use of the 32nd overall pick, which is what they originally held.

But would it have been even better if they drafted Sanders in 2019 and (fill in some other player) at pick No. 49 in 2018? I think there’s a legitimate debate there.

To begin, I’ll object somewhat to notion that Goedert is a traditional “backup,” since he’s playing 60 percent of the team’s offensive snaps. In theory, the ability to toggle back and forth between 11 and 12 personnel could have been a matchup nightmare for opposing defenses to have to contend with. Of course, with the Eagles’ complete lack of production at the wide receiver position, we have not seen that materialize, and the predictability of their two-tight end sets, sans competent receivers, has made that package ineffective.

I’d like to see what the offense can look like when they have legitimate receivers, and Doug Pederson is able to call games in a way that allows him to keep opposing defenses off balance going back and forth between 11 and 12 personnel.

Question from Hugh the King: Does Timmy Jernigan come back, and is there a status report on Malik Jackson?

There shouldn’t be a robust market for Jernigan, so I imagine that yes, the Eagles will be able to bring him back cheaply as a third or fourth DT. As for Jackson, with the disclaimer that the Eagles are not honest about player injuries, based on what we know, Jackson should be good to go for training camp next season.

Question from Darby is lost again: Did the Giants defender who threw a forearm a Carson's neck get fined? The announcers said it wasn't ejection worthy, but how is that different than a punch?

It’s arguably worse than a punch. Here’s a gif I made of it. The ball is clearly long gone, and Leonard Williams blasts Wentz with an elbow.

He should absolutely get fined for that.

Haha, yeah. I loved this tweet after the Eagles-Giants game, which is similar in sentiment.

They beat a two win team at home in December and I feel like I could bench press a refrigerator.

Question from the Ghost of Norm Van Brocklin: Sir Lord Jimmy, love your work. So let's say the Eagles beat the Potomac River Basin Indigenous Peoples and Dallas gets trucked by the Rams. Dallas has zero heart, quits on their coach and the Eagles actually beat them in two weeks to win the division. Plausible, yes? If this were to come to fruition the team would still need to take a loooooong hard look at the coaching staff and front office/scouting as to not repeat the last two years, yes? (Please say yes.)

Also, in the scenario you outlined, the Eagles would be able to rest their starters Week 17, lol.

Question from Eagle in Zona: Hail Lord Jimmy! When it comes to using analytical measures like SPARQ, do you believe in them or not? Side note - Robert Davis had the 2nd highest SPARQ score for WRs in the 2017 draft.

Of course. SPARQ scores, mockdraftable.com spider charts, etc., all that stuff is valuable. On a side note, while the perception of the Eagles is that they shun these types of hyper-athletic players because their offense is currently super-slow and boring as hell, they have drafted more than their share of SPARQy players, like Andre Dillard, Josh Sweat, and Avonte Maddox, etc., who are all in the 90th percentile or better, and others like Jason Kelce, Lane Johnson, and Mychal Kendricks, who would be SPARQ Hall of Famers if they went back that far.

Question from DB: Ravens-Vikings in the Super Bowl? Your thoughts?

My daughter's favorite color is purple, so I'd be happy for her, but the Vikings are going to have too difficult of a road to get there.