Mailbag: Will the Eagles actually make their (projected) 10 picks this year? 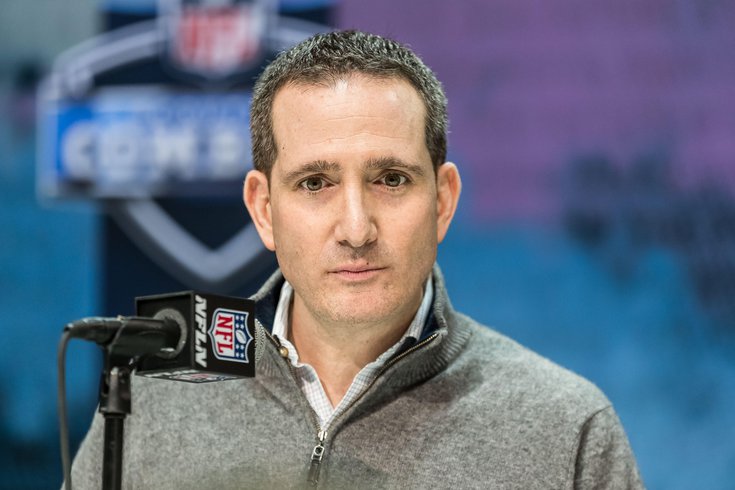 In our Eagles chat on Thursday, there were a lot of questions that we could not get to in time or other questions we did answer but could use more color. And so, let's do a mailbag post to answer some of the overflow.

Question from Henry Ruggs Enthusiast: The Eagles have 10 picks in the draft, but how many picks do you think they make after trade-ups, trades for players, etc.? My guess is it boils down to 7 actual players selected in the draft.

Around this time last year, the Eagles were projected to have nine picks. Then they got one fewer comp pick then expected, made some draft-day trades, and ended up drafting just five players.

This year feels different. The Eagles' messaging all offseason so far is that they have to get younger, and with this being a strong draft (especially at some positions of need), I would be very surprised if they didn't draft at least eight players. I'd set the over-under at 9.5.

Question from Daniel: With the combine already complete for wide receivers, the SPARQ website has posted their numbers for this class.  In the top ten are notables like Riggs, Mims, Reagor, and Aiyuk, but there are a couple of mystery guests to the party, such as:

Dear Lord Jimmy, you watch a decent amount of tape for your Grocery series, so I humbly ask you - Who are these guys? Are any of them back of the draft or UDFA players to keep watch on?

Reed has been on my radar for a while now. In fact, we had him in the sixth round in our Eagles-only mock draft, version 2.0. He's one of the best kick returners in the country, and did a little of everything for Virginia, lining up inside, outside, and out of the backfield. Some teams might view him as a running back at the next level.

Cleveland was an attractive recruit out of high school, but his production at Florida stunk. He was at the Senior Bowl, so I got a decent enough look at him, and he didn't really impress.

I haven't really looked at Patmon, because like Cleveland, there's just not enough production. He was the third-most productive player on his own team this past season.

Because they're all good athletes, they'll all probably get drafted because they, in theory, have a floor of special teams contributors. I think they're all Day 3 guys.

Question from eight tips: Would Nathan Gerry be considered the Eagles' No. 1 linebacker at this moment?

Question from Kephas: What's the craziest thing a player has done at the Combine to either improve or hurt their draft status?

I'm sure there are better stories than this from back in the day, but Reuben Foster getting sent home for screaming at people in the hospital during medical checks stands out, and was probably a good indication of what he was as a person.

Question from greenwithenvy: How many fans would have to chip in $5 to offset Alshon's cap hit this season? We gotta get rid of this guy.

Well, it's not a matter of coming up with the money. The money is already either already paid, or guaranteed. If the fans paid the tab, he'd still count on the cap as dead money. In a world where the fans could just pay the dead money down, it would take 5,221,200 people to contribute $5 each to get rid of him with no dead money.

Question from Pragmatic: What player who is not a WR or CB if they dropped to 21 would the Eagles think about drafting knowing that everyone would bury them into oblivion even if it was the right decision?

I'm posting my Eagles-only mock draft, version 3.0 tomorrow, and have such a player as the first-round pick.

Question from Pennsylvania Ballet: Are the Sixers the biggest disappointment since Chip Kelly's third season?

I think a bunch of us knew that Chip Kelly's short window for success with the type of offense he ran had run its course by then, and that third season was somewhat predictable. I would say the 2019-2020 Sixers are kind of like the 2009 Eagles, who still had a pretty good record, but yet were somehow obviously a disjointed team that you knew was going to get smoked in the playoffs.

Question from Brian Dawk: You should challenge the Philly sports writers to a surf-off. You'd have home field advantage, so to speak.

Unless one of my colleagues is hiding some kind of hidden talent, I feel quite comfortable crowning myself as the best surfer in Philadelphia media. I know that John Clark paddles out here and there, but he's more of a boogey boarder.

Question from Kephas: What would be the combine event equivalent for beat writers? (e.g. Question Face-Offs instead of Vertical Jump)

Ha, I like this one. I'll take it a bit further than just the Combine drills. If I were a sports editor looking to hire a writer, here's how I would equate writer traits to football player traits.

• Game tape = Quality of content: This should be pretty self-explanatory, and it's the most important piece of the puzzle, by far. You actually have to watch the tape to see if the player is good, in the same way you have to actually read the writer's work to determine the same.

• Big play ability = News-breaking stories: Getting a good scoop is kinda like connecting on a 50-yard bomb. To begin, your story is always going to crush, traffic-wise. But then also your Twitter feed blows up, everyone has to cite you and your work in their re-blogged stories, and it just makes your media outlet look good. Of course, the flip side to that is if you try to do too much, attempting to break news that is incorrect. That's the equivalent of an interception.

In the NFL, people start posting Manning-face memes after a pick. In beat writer world, guys who get stuff wrong hear about their misses five years later. Some reporters have big scoops, and they don't miss. They're the Aaron Rodgers of beat writers, in that they can connect on big plays, while also keeping their INTs way down. On the other hand, I can think of a few national reporters whose games resemble Jameis Winston or Jay Cutler, in that they just chuck things up for grab, hoping for the best. Sure, the big plays are great and you'll connect on a few, but if you have too many misses you become unreliable.

• Production (stats) = Twitter followers: If a writer has a lot of Twitter followers, there's a decent enough chance that a lot of people like their work, in the same way that if a player has great stats, the likelihood is that they can play a little bit. However, in the same way that stats might not tell the whole story on a wide receiver prospect, for example, a writer with a low number of Twitter followers doesn't mean that they aren't good. Terry McLaurin didn't have great college stats due to oddball circumstances, but he is obviously a good player in the NFL. A writer might not have a ton of Twitter followers if they haven't been around as long as some other writers, or they just aren't heavy social media users.

• Football IQ = Uh, football IQ, I guess: At the 2016 Combine, it was clear during interview sessions that Carson Wentz got the mental side of the game. As a writer, can you post a film breakdown and not immediately reveal yourself as someone who has no idea what they're looking at?

• Character issues = Hygiene: If a player is just a big jerk or has some run-ins with the law on their record, then they better be really, really good at the other stuff. You're happy for the way they contribute on the field, but you don't really want them around your locker room. If a writer has like terrible breath or something, again, you're happy if they're churning out good content, but you don't really want them around otherwise.

• Combine events = Other traits: And then finally, you have the other little tests that help explain all of the above.