Film breakdown: Malcolm Jenkins is so close to being great 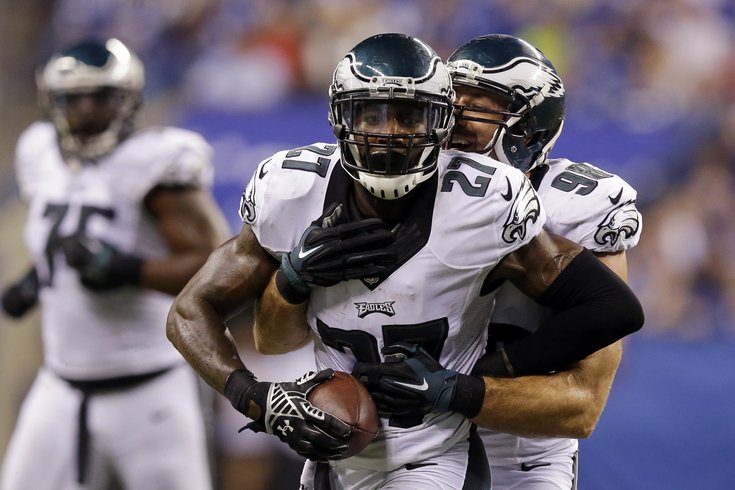 In 2014, Malcolm Jenkins had three interceptions. He was in position to make more.

Malcolm Jenkins played a great game Week 1 against the Atlanta Falcons Monday night. Lacking good options at slot corner, the Eagles asked Jenkins to drop down and cover the slot when Atlanta went to 3- and 4-WR sets.

That meant he often had to cover Julio Jones man-to-man, if the Falcons decided to line Jones up inside, and Jenkins was up to the challenge.

Jenkins made plays all over the field. He was credited with three pass breakups, and he had what could have been the play of the game defensively, when he knifed through the Falcons' line to tackle Falcons RB Tevin Coleman for a four yard loss, giving the Eagles' offense one last chance to win the game:

However, two of Jenkins' "good" plays could have been game-changing plays.

"I thought Malcolm ‑‑ we all thought Malcolm had a really good game," said Chip Kelly. "He was very consistent in his coverage, no matter who they put in there. A couple times he was on Julio because he was inside. But again, he did make two big plays.  They were good plays. If they're great plays, he comes up with interceptions in those situations. But we were really pleased with how Malcolm played."

On the Falcons' first drive of the game, Atlanta drove the field, and faced a 3rd and 3. The Falcons tried a quick slant to Jones, which Jenkins jumped and had an opportunity to make a huge play. Unfortunately, Jenkins was unable to turn a good play into a great one.

Instead, the Falcons kicked a field goal.

Later, Jenkins had one right in his gut that he was unable to bring in. Watch as he basically runs Leonard Hankerson's route for him, getting himself in a great position to make a play, and then ... D'oh!

That would have given the Eagles the ball at the Falcons 42 yard line. Instead they punted and pinned the Eagles deep at their own 5.

This isn't new. Near the end of the season last year, Jenkins put himself into position to make game-changing plays, but was unable to convert. Against the Seahawks, he jumped a route and had a chance to take a Russell Wilson pass to the house when the Eagles were dying for a huge play, but...

Or against the Redskins on their opening drive Week 16, when Jenkins again put himself in position to intercept a pass and take it to the house. This was a potential 10-point swing:

And now we're just piling on, but here's Jenkins with an opportunity to pick off a terrible decision by Eli Manning in the meaningless Week 17 game against the Giants last year.

Jenkins' knack to anticipate throws and get himself in position to make plays reminds me a little bit of Ed Reed. His ability (or lack thereof) to finish those plays after he's done the hard part does not.