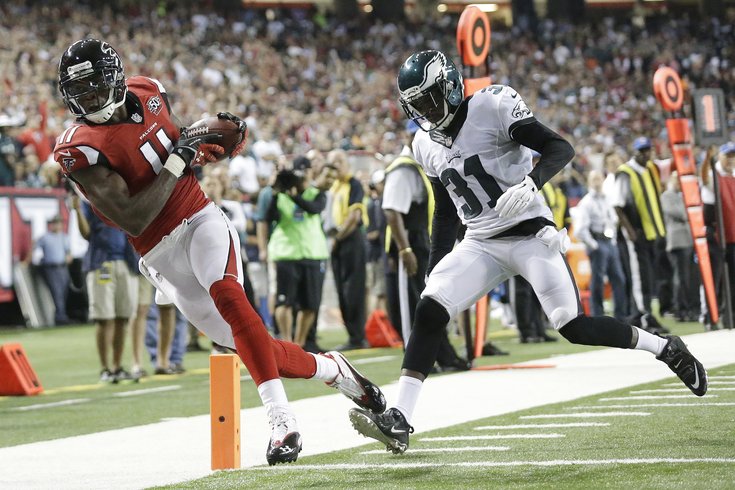 The Eagles continue to give up far too many "X plays."

Turnovers, big plays allowed, offensive line continuity, bad quarterback play, and a lack of explosive plays offensively were the five major reasons the 2014 Eagles failed to make the playoffs a year ago.

At the end of the 2014 season, we published a five-part series detailing each of those failures.

Many of those issues reemerged last night in Atlanta. Let's look at each of the Eagles' failings of a year ago and determine where they remain deficient.

No team turned the ball over as much as the Eagles did a year ago. In fact, the Eagles led the league in interceptions thrown, fumbles lost, and total turnovers, achieving the triple crown of turnover awfulness. Against the Falcons, it wasn't a turnover debacle, but two turnovers puts them right around the pace they were on a year ago. Sam Bradford's first interception was devastating, costing the Eagles seven points just before the end of the first half.

The second one sealed the win for the Falcons.

Part of the reason for Bradford's two picks were the sheer volume of passes he threw. When your run game isn't clicking the way you'd like, and you're chucking the ball around the field 53 times, you're going to be more prone to turning it over.

The 2014 Eagles gave up 72 pass plays of 20+ yards. That was the most in the NFL, with the next closest team being the woeful Chicago Bears, who gave up 65. The Eagles also gave up 18 plays of 40+ yards, which was also the most in the NFL. Against the Falcons, they gave up five pass plays of 20+ yards, with perhaps the biggest one being the 44 yard deep ball to Julio Jones that set up the Falcons to take the lead with a field goal:

Five pass plays of 20+ yards puts them on pace for 80 on the season. Those "X plays" remain an issue, clearly.

In 2014, the Eagles' OL was in a constant state of disarray due to injuries and Lane Johnson's suspension. The Eagles' OL starters played just 68.62% of the team's offensive snaps combined, and the starting combo of Peters-Mathis-Kelce-Herremans-Johnson didn't play a single snap together in 2014.

Obviously, the Eagles did not have any offensive linemen injured against the Falcons last night, but there were certainly OL continuity concerns heading into season, as the Eagles were rolling with a pair of new starters at guard. Prior to last night, the Eagles' OL starters had almost no experience playing with the guy immediately to their left or right:

It takes a long time for an offensive line to get good at blocking blitz pickups, stunts, twists, etc, and we saw some of that last night up front. For example, look no further than the Bradford second quarter INT shown above, as Peters and Barbre were unable to handle a fairly basic stunt.

This is one area where I felt the Eagles improved last night. As noted above, Bradford had the one egregious INT, but was otherwise solid, especially for a guy making his first regular season start since tearing his ACL twice. I should also note that all throughout training camp, I often reported that Bradford had barely moved around at all either within the pocket, or escaping from it. Last night was the best I've seen Bradford move around, by a mile. He had to escape the pocket several times, and didn't look awkward or uncomfortable doing so.

In 2014, the Eagles had 75 plays of 20+ yards, which is a high number compared to other NFL teams, but not near what they were able to do in Chip Kelly's first year with the team, when they had 99.

Since Kelly's offense came to Philly, the Eagles have scored fast. In 2013, the time of possession on Eagles TD drives, on average, was just 2:08. The next closest team was at 2:32. The 2014 Eagles averaged 2:38 of time of possession per TD drive, which again, is still fast, but not as lightning fast as they were in Kelly's first year.

The trade-off with Kelly's fast paced offense, however, is that when they don't score, three-and-outs and other short drives happen very fast too. As a result, the Eagles defense had to face more snaps (2263) against them on defense the last two seasons than any other team in the NFL. By comparison, the NFL league average over the last two years is 2065 snaps. The difference of roughly 200 snaps between the Eagles the rest of the league equates to over three games' worth of snaps.

In other words, for that trade-off to work, the Eagles better be explosive, and they weren't "explosive enough" in 2014.

Last night against Atlanta, while they had three impressive possessions to start the second half, they were not "explosive enough" throughout the rest of the game. Of their 13 drives, seven drives resulted in a punt or turnover in which they had zero first downs or one first down, all of which were no longer than 20 yards. Additionally, the Eagles had just three pass plays of 20+ yards. For the number of drives they had, that is not good enough.