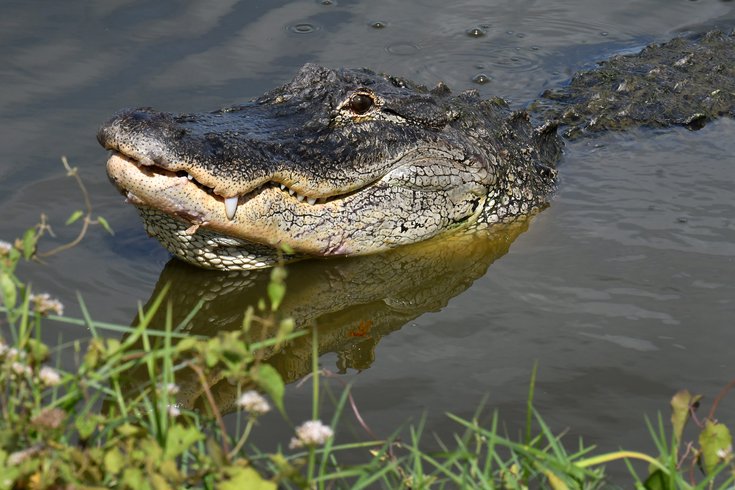 Florida resident and Philadelphia native Eugene Bozzi used a trash can to successfully capture an alligator that was outside his home. Above is a file photo of an alligator in Viera, Florida.

It's always handy to have a garbage bin close by. One Philadelphia man now living in Florida proved that in an extreme way when he used a receptacle to trap an alligator creeping outside his home.

Eugene Bozzi's children were playing outside their home in Mount Dora, Florida, on Tuesday when they heard hissing coming from bushes in a neighbor's yard. It was Florida's most well-known swamp creature: an alligator.

"My daughter came and got me. I couldn't really see it, so I got close up on it, and he backed up a little bit, and I was like 'he's kind of big,'" Bozzi told ABC News

Bozzi, originally from North Philly, has lived in Florida for a year. He's also a U.S. Army veteran and the tactical skills he learned during his service helped as he sprung into action.

He told the New York Post that the idea to use the trash receptacle to trap the alligator was inspired by Animal Planet videos he had watched. Bozzi figured that the gator would interpret the trash can's opening and lid to be a large animal's mouth.

The video shows Bozzi pushing the garbage can, on its side, towards the alligator, backing the reptile up onto the driveway. As the can gets closer, the alligator opens its wide mouth. Bozzi is heard asking the crowd that had formed to tell him when the alligator's head was inside the bin.

As the alligator starts to enter, Bozzi flips the plastic bin's lid, smacking the gator in the head. The alligator enters the bin with its tail swinging violently.

Bozzi turns the receptacle upright to keep the animal from getting out, and onlookers cheer as he wheels the bin across the street and down a grassy hill to a retention pond. There he opens the lid, tips over the can and sprints away.

The alligator, appearing to be quite traumatized by what had just happened, slithers out of the trash can and into the water.

The viral moment, which Bozzi fittingly described as "the whole jawn" on Instagram, can be viewed below:

Despite his heroics, Bozzi's decision to trap alligator on his own wasn't the best call, according to wildlife experts. The Florida Fish and Wildlife Conservation Commission told Fox 35 Orlando that Bozzi actually put others in danger by trying to take on the alligator himself.

Bozzi said that he'll call animal control the next time an alligator arrives at his doorstep. In the meantime, he has no regrets about what he did.

"I think it was my duty to protect everybody and the animal came out alright," Bozzi said.