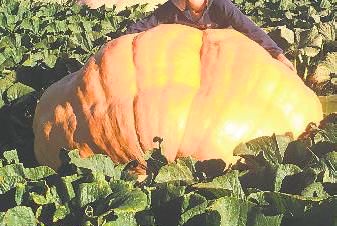 Back in 2008, after being named "Giant Pumpkin Commonwealth Grower of the Year" by the Ohio Valley Giant Pumpkin Growers organization, Quinn Werner predicted that he would someday surpass the 1,475.2-pound personal best behemoth he submitted that year.

Quinn, a gardener from Saegertown, Pennsylvania, found his way into competitive pumpkin growing in 1999 after accepting a bet from a close friend to see who could grow the biggest pumpkin. He won, and from that day forward, he became a diehard hobbyist, according to the Meadville Tribune.

Give me 5-10 years, Quinn said in 2008, and refined growing techniques will produce the coveted one-ton pumpkin.

Seven years later, he made good on that prediction, registering a massive 2,020.5-pound pumpkin at the Great Pumpkin Commonwealth's weigh-in last weekend in Canfield, Ohio.

Because Quinn's pumpkin was grown in Pennsylvania, its measurements apply to the Keystone State's record book. He shattered the previous state high of 1,821 pounds and also topped the Ohio record of 2,008 pounds.

According to GPC president Andy Wolf, Quinn's pumpkin is the sixth heaviest pumpkin grown in 2015 and the 12th heaviest all-time.

Every April, Quinn plants 10 pumpkins inside his home before moving them outside to mini-huts with special light bulbs. Over the next several months, they require the kind of care given to an infant, with Reemay blankets – a blend between fabric and paper – to help them contain heat.

This year, Quinn said his pumpkin flourished despite unfavorable natural conditions. The ideal daytime temperature for growing giant pumpkins is between 82-94 degrees. Nighttime temps are best in the 50's and 60's. Quinn said most mornings were about 40 degrees, but using improved techniques enabled his crop to overcome the weather.

Giant pumpkins like Quinn's aren't recommended for eating due to their rapid growth and insecticide use, but with Halloween and the rest of the holiday season in store, hobbyists find useful, or at least entertaining ways to dispose of their prize pumpkins.

At the annual Pumpkin Fest held at Conneaut Park, two pumpkins weighing more than 1,000 pounds are dropped on top of old cars. Giant pumpkins can also be hollowed out for use as regattas during Fall events.

Despite the brand new state record, however, Quinn is already focused on restarting the 12-month cycle involved in the pursuit of the next prize pumpkin.