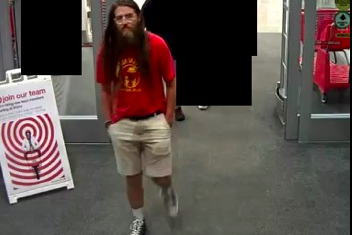 The man pictured above allegedly urinated on products at a Starbucks in Manheim Township, Pennsylvania on the night of Aug. 17, 2019.

Manheim Township authorities are searching for a man who allegedly urinated on products at a Starbucks location inside a local Target store.

The unknown suspect allegedly walked into the Target at 1589 Fruitville Pike and went behind the counter of the Starbucks.

Once in the employee area, the suspect allegedly urinated into a sink and onto several pieces of merchandise. He then fled the store, according to police.

"Note the wet spot observable on the male's shorts," authorities said in a statement.

The incident comes just weeks after a western Pennsylvania woman was caught on camera urinating on potatoes in a Walmart. The woman later turned herself in to police.

Anyone with information about the identity of the suspect in Manheim Township is asked to contact police 717-569-6401.