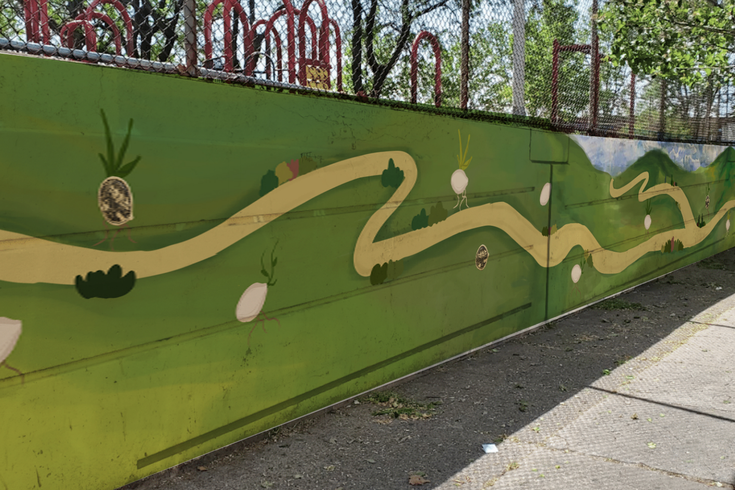 Source/City of Philadelphia Office of Arts, Culture and the Creative Economy

A proposal submitted by the artist team of Samuel Rodriguez and Karen Singer is called 'Seeds of Hope.'

City officials are asking for community feedback on six public artwork proposals to spruce up the Mann Rivera Center's exterior perimeter wall along Allegheny Avenue and North 5th Street in the Fairhill neighborhood of North Philly.

The city's Office of Arts, Culture and the Creative Economy has published a survey that the public can fill out and submit their comments through June 29.

Public feedback will help inform which design best reflects the community when a final decision is made by the Mann Rivera Renovation Percent for Art Committee in the coming months, city officials said.

The goal of the project is to commission an enduring, site-specific artwork "that is a true reflection of the people, culture and community of the Fairhill neighborhood and to create a landmark work of art at this highly visible location." The winning design will be commissioned through the city's Percent for Art program.

The six semifinalists were selected by the committee from a total of 101 applicants in February. Each semifinalist was given $1,000 to prepare a proposal. A budget of $103,000 has been allocated for the commissioned artwork.

Each of the semifinalists have been strongly encouraged to work with the local community in designing their proposals to meet the needs and desires of the public.

Below is each of the six semifinalists, along with a photo from their respective proposal:

More information, descriptions and photos of each proposal can be found on the survey.

Calling members of the Fairhill neighborhood and Mann Rivera Center community – We want your input on six semi-finalist artist proposals for a new, site-specific public artwork at the Mann Rivera Center. Review the designs and take our survey: https://t.co/12xHZcQaWl pic.twitter.com/U9eNptCDPa

The Rivera Recreation Center and Mann Older Adult Center was one of 400 neighborhood parks, recreation centers, playgrounds and libraries across Philadelphia selected for the city's Rebuild initiative.

The multi-year program, which was enacted in 2017, has set aside $500 million to bring about physical improvements to community facilities, increase community engagement and empowerment and create economic opportunity across the city.

The $500 million budget has been provided through city bonds, a grant from the William Penn Foundation and state and federal funds. The initiative has also drawn funding from the city's soda tax, which passed in 2016 to offset the city's bond program.

The goal of the Rebuild initiative has been to support residents in their communities, connect more Philadelphians with family-sustaining jobs and help minority and women-owned businesses grow.

The Rivera Recreation Center and Mann Older Adult Center was among the second round of community sites selected in 2018 for renovation through the Rebuild program.

The Mann Renovation Project has been broken up into three phases and totals $10 million. HACE, a local development organization, has led the project.

Improvements to the 5.4-acre site in the Fairhill section of North Philly have included new ADA-approved playgrounds for younger and older children, an updated outdoor basketball court and a community garden for senior citizens.

The recreation center offers programs for all ages. Other features of the site include a public computing center, multipurpose rooms, a weight room and various gyms.

A complete map of Rebuild project sites across Philadelphia can be found on the city's website.