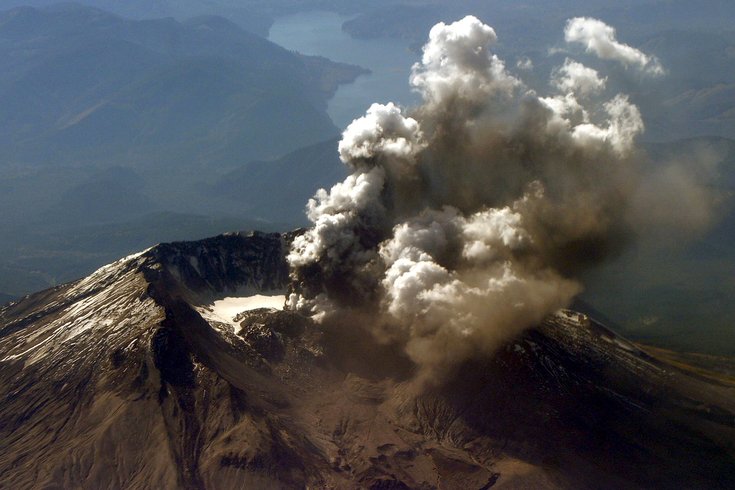 Mount St. Helens emits a plume of steam and ash in this October 1, 2004 file photo, from an area of new crevass in the crater glacier south of the 1980-86 lava dome.

Early data collected in a pioneering effort to map the inner workings of Mount St. Helens have provided promising initial insights, 35 years after a massive eruption by the Washington state volcano killed at least 57 people, scientists said on Monday.

Further progress is expected soon after readings are collected from more than 70 monitoring devices that ring the mountain, many at high altitudes, which have been inaccessible throughout the winter, they said.

"It doesn't look the way we expected it to," Rice University geologist Alan Levander, who is involved in the research, said of the initial data, adding that with limited two-dimensional images collected so far it take several years for scientists to more fully understand what they are viewing.

Mount St. Helens, which sits between Seattle and Portland, Oregon, erupted in an explosion of hot ash on May 18, 1980, spewing debris over a wide area, killing 57 people and causing more than $1 billion in damage.

Now, through small quakes created via dynamite-triggered blasts that fire seismic waves through the volcano's interior, researchers are working to develop ultrasound-like images of molten rock within the volcano in a project that could improve warning systems.

The team, which includes researchers from universities and federal scientific agencies, aims to apply what it learns about the below-surface flow of molten magma to volcanoes in more populous areas, such as Mount Rainier, which overlooks Seattle.

Seismic activity and gas emissions already help geologists predict the timing of eruptions, but there are no good tools for predicting their size, said Kenneth Creager, a University of Washington seismologist involved in the study.

Mapping the flow and volume of magma from the earth's crust up through Mount St. Helens' peak could change that, and ultimately help researchers anticipate large eruptions elsewhere, Creager said.

“It’s difficult to tell how big an eruption might be. Knowing how much eruptible magma is down there may tell us,” he said.

At the time of the 1980 blast, scientists had been monitoring a bulge and tracking mini-eruptions for several months, but had little understanding of the forces at work beneath the surface, said Carolyn Driedger, a U.S. Geological Survey glacier hydrologist who was driving toward the volcano on the morning of the eruption.

A year ago, the U.S. Geological Survey said magma levels were slowly rebuilding inside Mount St. Helens, but there was no sign of an impending eruption.