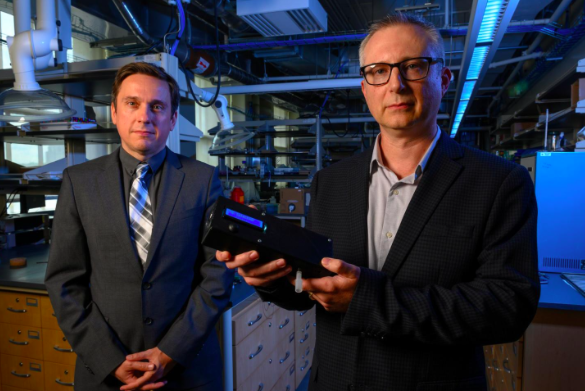 University of Pittsburgh researchers Ervin Sejdic and Alexander Star hold up the prototype of their THC-detecting device, which could be used by police to test individuals suspected of driving under the influence of marijuana.

Researchers at the University of Pittsburgh have developed a prototype for a breathalyzer device that can accurately measure THC, the psychoactive compound found in marijuana.

The prototype comes as recreational and medical marijuana become more prevalent across the United States, creating a challenge for law enforcement officers who encounter drivers who may be under the influence.

Current tests for THC rely on blood, urine or hair samples, which require police to take DUI suspects to testing facilities away from the scene of the vehicle stop. Those samples only indicate the presence of THC in the system. Positive results do not necessarily reflect whether an individual was under the influence at the time the sample was taken.

Interdisciplinary researchers in Pitt's Department of Chemistry and the Swanson School of Engineering developed the THC breathalyzer using carbon nanotubes. THC molecules bind to the tubes and alter their electrical properties, while sensors detect levels of the compound with an accuracy comparable to, or better than, mass spectrometry, the gold standard for THC detection.

"The semiconductor carbon nanotubes that we are using weren't available even a few years ago," said Sean Hwang, lead author on the paper published in the journal ACS Sensors. "We used machine learning to 'teach' the breathalyzer to recognize the presence of THC based on the electrical currents recovery time, even when there are other substances, like alcohol, present in the breath."

Researchers said the prototype looks similar to a breathalyzer used for alcohol — a plastic casing, tube for breath and digital display. In a lab setting, the device accurately detected THC levels from samples that also included carbon dioxide, water, ethanol, methanol and acetone.

Other devices, most notably a dual THC-alcohol breathalyzer developed by Hound Labs, are gaining ground to become the first to enter the market. The company says it has raised $65 million in funding and aims to release its device this winter, but there are concerns about the rigorousness of its testing.

Further tests are required on the Pitt device before it's ready for manufacturing and use by law enforcement, but researchers hope the breathalyzer will help set a standard for marijuana DUI thresholds.

"In legal states, you'll see road signs that say 'Drive High, Get a DUI,' but there has not been a reliable and practical way to enforce that," said Dr. Alex Star, whose lab developed the prototype. "There are debates in the legal community about what levels of THC would amount to a DUI, but creating such a device is an important first step toward making sure people don't partake and drive."