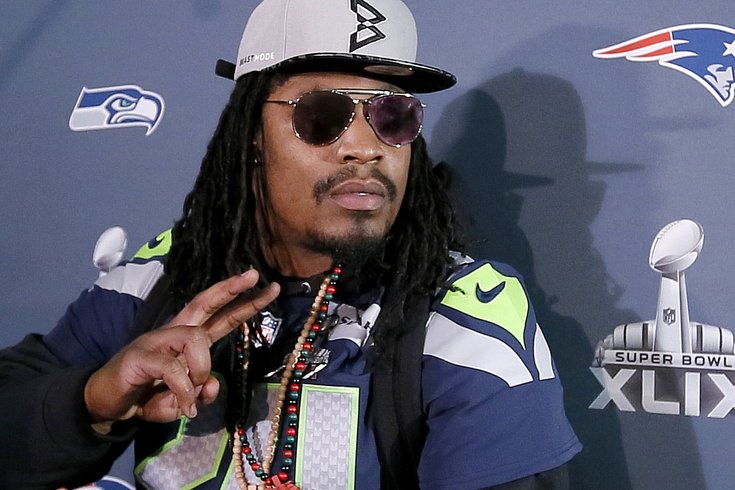 PHOENIX  — Marshawn Lynch changed the script and fired back at his critics.

After two days of giving only scripted answers, the Seattle Seahawks' star running back gave his most extensive comments of Super Bowl week, mostly telling reporters why he won't talk to them.

"I don't know what story y'all trying to get out of me. I don't know what image y'all trying to portray of me," Lynch said Thursday. "But it don't matter what y'all think, what y'all say about me because when I go home at night, the same people that I look in the face — my family that I love, that's all that really matter to me. So y'all can go make up whatever y'all want to make up because I don't say enough for y'all to go and put anything out on me."

When Lynch arrived at the podium, a man with a reporter's credential who said he was a teacher asked him to give his students a "shoutout."

But Lynch wouldn't bite and began his unscripted statement.

"Y'all shove cameras and microphones down my throat," Lynch continued. "But when I'm at home in my environment, I don't see y'all, but y'all mad at me. And if you ain't mad at me, then what y'all here for? I ain't got nothing for y'all, though. I told y'all that."

Lynch, who had spurned reporters' efforts to get him to talk at mandatory news conferences Tuesday and Wednesday, seemed frustrated that they were still trying.

"I'm here preparing for a game. And y'all want to ask me these questions, which is understandable. I could get down with that. But I told y'all. I'm not about to say nothing. ... All of my requirements are fulfilled."

Lynch praised his teammates, his hometown of Oakland, California, and his Family First Foundation. When asked who the best player on the Seahawks was, he said: "All of them."

As he has all week, Lynch stayed five minutes before leaving.

At Media Day on Tuesday, Lynch repeated: "I'm just here so I don't get fined" while talking to reporters.

On Wednesday, he replied to all questions with: "You know why I'm here."

Lynch has a history of avoiding reporters. In November, the NFL fined him $50,000 for violations of the league's media policy in addition to collecting the $50,000 fine that was imposed against Lynch for violations last season. The fine from 2013 was held in anticipation of future cooperation from Lynch.

The Professional Football Writers of America complained to the league about Tuesday's session and Lynch had been apprised of a potential fine. A league spokesman declined comment.

Lynch again wore a "Beast Mode" baseball cap and told everyone where they could buy one. The two hats he already wore this week have sold out on Lynch's website, where they're part of his Beast Mode apparel line.