Orders for the sandwiches must be placed ahead of time 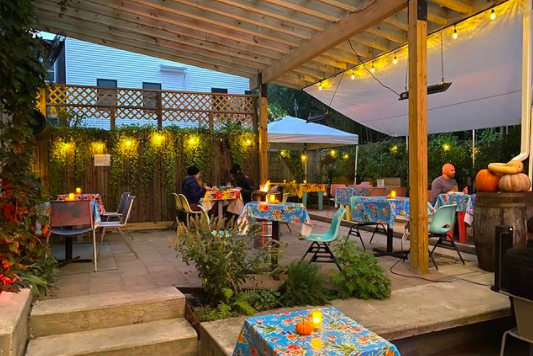 Martha Kensington is hosting a plant-based cheesesteak pop-up. The veggie sandwiches can be eaten on the covered, heated patio or can be taken home.

Martha Kensington, a bar/restaurant on the border of Fishtown and Kensington, is known for its cocktails, hoagies and backyard patio.

If you haven't been yet, you may want to stop by for Martha's "cheesesteak" pop-up this month.

RELATED: East Passyunk Restaurant Week to return for 12 days this winter | Where to find Valentine's Day dinner specials around Philadelphia

They're not really cheesesteaks because there's no cheese or steak, but the plant-based take on the classic Philly food still looks like the real deal.

"[Chef Andrew Magee] (aka vegetable wizard / sandwich maestro) has been working on a dope vegetable cheesesteak for you and teamed up with his bud [chef Aric Archebelle-Smith] (aka bread artist) who's been perfecting his loaves over these past months," Martha shared in an Instagram post.

The pop-up will take place Sunday, Feb. 21. Sandwiches are available for preorder only and the quantity is limited. The price is $16.

"It's made with seared local mushrooms, celeriac, black garlic onions, slathered with melted daikon on Aric's bread with a side of [Fishtown Ferments] hot hoag spread," Martha wrote in its post.

Those who order ahead can pick up between noon and 4 p.m. The veggie cheesesteaks can be eaten on the covered, heated patio or can be taken home.

This isn't the first time a plant-based cheesesteak has been introduced to the city. Before it closed, Wiz Kid in Rittenhouse sold vegan cheesesteaks and a vegan take on a classic roast pork sandwich. Questlove also partnered with Impossible Meat to bring a vegan cheesesteak to Citizens Bank Park and now, it's officially shipping nationwide on Goldbelly.

If you miss out on the upcoming pop-up at Martha, you can still stop by for the bar's regular menu. Martha is located at 2113 E. York St.