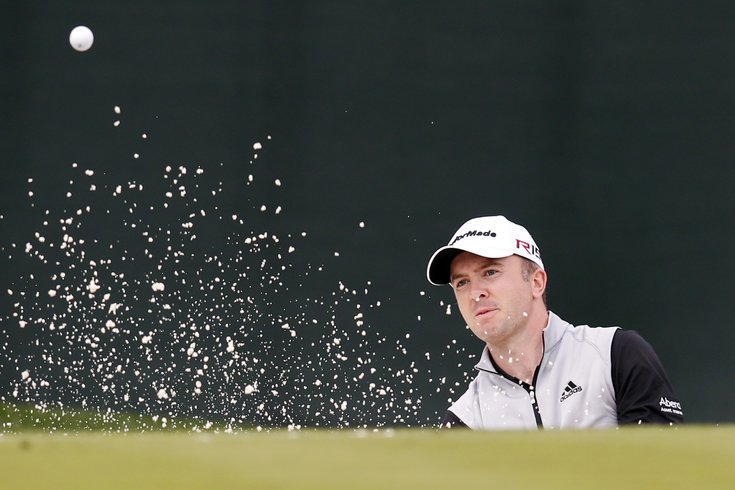 Martin Laird hits out of the sand trap on the 16th hole during the third round of the Phoenix Open Saturday.

SCOTTSDALE, Ariz. — For all his birdies Saturday, two big pars kept Martin Laird in control at the Phoenix Open.

Laird made 10-footers for par on the 16th and 18th holes and had a 3-under 68, giving him a three-shot lead going into the final round over a new pair of the next generation.

Hideki Matsuyama, the 22-year-old from Japan who already has seven worldwide victories, roared into contention with birdies on his last four holes for an 8-under 63, the low round of the tournament. Brooks Koepka, a 24-year-old who traveled the world to get back home to America, finally found some fairways and used his power to shoot 64. They were tied for second with Zach Johnson, who had a 67.

Laird, a 32-year-old Scot who has lived in Scottsdale the last 14 years, was at 13-under 200 as he goes for his fourth PGA Tour victory.

"Today was a little bit of everything," Laird said. "I hit some of my best shots and some of my worst. Obviously, I'm happy to extend my lead. I'm going to have to play better tomorrow."

Among the 15 players within five shots of the lead was Francesco Molinari of Italy, who made a hole-in-one before more than 15,000 rowdy fans on the par-3 16th hole. It was the first ace in the notorious arena on Saturday — the biggest day at the Phoenix Open — since Tiger Woods in 1997.

Perhaps the biggest surprise was Jon Rahm of Spain, a junior at Arizona State playing this week on a sponsor's exemption. He got the gallery on his side early, especially by wearing a Sun Devils jersey when he teed off on the 16th, and shot 66. Rahm was at 9-under 204, along with Ryan Palmer (68) and 21-year-old Justin Thomas, who had four birdies over his last six holes to salvage a 69.

Laird played in the final group with Thomas and 21-year-old Daniel Berger, two players who were still in high school three years ago. That's the way golf is shifting, players getting younger and more fearless. And that's what Laird faces again on Sunday.

Matsuyama, who won the Memorial last year, was the first rookie to win the Japan Golf Tour money list and already is No. 18 in the world. He played bogey-free, and it was his birdie streak at the end of the round that put him into contention.

The best one of all was his 50-degree wedge into the 16th and a salute from the crowd.

Koepka is the Floridian who went to the far corners of the world to chase his card, starting at the Challenge Tour on Europe and then winning the Turkish Open last year. He was 3 over on the par 5s this week, his first tournament in nearly two months, and made up some ground Saturday. Koepka hit the fairway on two par 5s on the back nine, setting up simple up-and-down birdies, and he made birdie on the 17th.

"It's just a little bit of rust, just not playing in two months," Koepka said. "Felt like today I was finally comfortable. Being out there the last two days, it was almost like I was trying to find the driver a little bit."

Laird never lost the lead Saturday, though he was spotting on the front nine. He holed a 45-foot putt from the fringe on the 11th hole, two-putted for birdie on the 13th and was poised to stretch his lead until pulling his tee shot into the water on the 15th. He wound up making bogey, and then went left of the 16th green into the bunker and was staring at another bogey. But he made the par putt, had perfect touch on a wedge to 3 feet for birdie on the 17th and escaped with another par on the 18th.

Even with an overcast sky and cool temperatures, TPC Scottsdale still had a big buzz. The hope was for a record attendance — as it had been all week — until Tiger Woods and Phil Mickelson both missed the cut. The attendance was 159,906, some 40,000 short of the record last year.

But it was loud enough, especially the final hour.

"It shouldn't be a struggle to get your adrenaline going," Laird said.