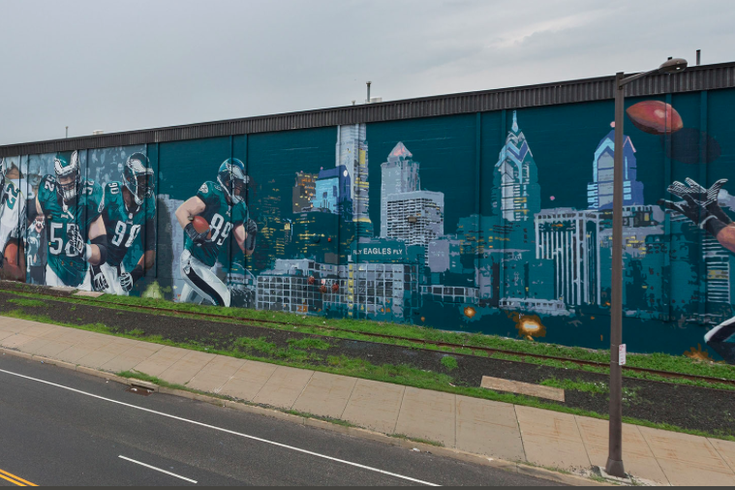 The countdown to the start of Eagles training camp is at one week. All of those burning questions, which we hope will not result in a dumpster fire, will start to get answered as the team's overhauled roster takes shape behind Chip Kelly in his critical third year as head coach.

There's a ton of history behind this team and every generation has its indelible faces, voices and moments. In a grand display of the city's commitment to Eagles football, the Philadelphia Mural Arts Program teamed up with the team to paint the fifth largest mural in the United States, which was unveiled last Thursday on Darien Street directly across from Lincoln Financial Field.

#OurCityOurTeam are represented on the fifth-largest mural in the country! Meet the Mural: http://t.co/kNLVrva46u pic.twitter.com/a7UczM3tKV

The design, conceived by Eagles graphic designer Christine Dorn, was developed in partnership with mural artists Phillip Adams and John Laidacker. More than 1,000 people, many of them season ticket holders, collaborated to paint the 17,000 square foot mural during four community paint days in November 2014, sometimes joined by players.

A total of 2,900 man hours and 386 gallons of paint went into the mural, which involved affixing 688 pieces of five-by-five parachute cloth the to the wall.

It will be a perfect complement to the gameday experience and is another demonstration of why Eagles fans are second to none in the NFL, even when it comes to being hated. As WIP's Glen Macnow put it on the air with Reuben Frank this weekend, it's better to be the fans people in opposing cities hate than to be fans of a team nobody cares about.