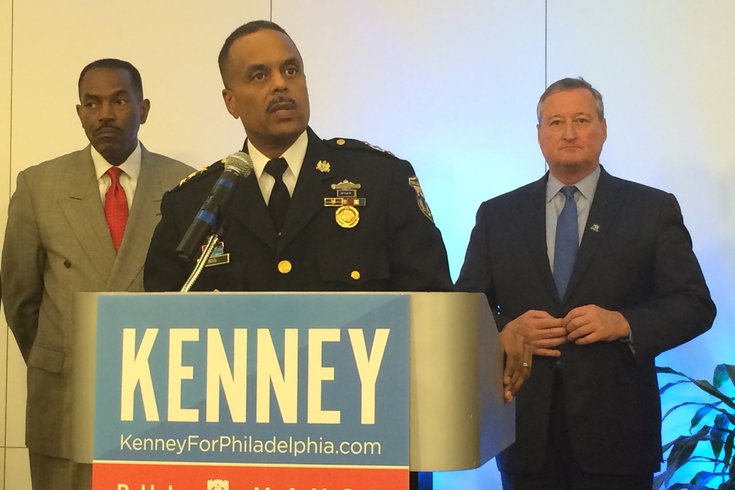 In what he said was his campaign's "worst-kept secret," Kenney promoted First Deputy Commissioner Richard Ross to the department's top job.

After a short introduction, Ross stepped to the podium to accept the position, which he will take over in January. Ramsey is set to retire Jan. 7.

"What I love about this whole thing is that it's safe to say that we are just two regular guys," Ross said of himself and Kenney. "We are just two guys who love this city."

Ross has 26 years of experience with the Philadelphia Police Department. He's been first deputy commissioner since 2008, and, in that role, he oversees the daily operations of 6,000 sworn and civilian personnel assigned to Patrol Operations, the Special Investigations Unit, Homeland Security and Domestic Preparedness and state and federal task forces.

Ross also coordinated police efforts for the celebration after the Phillies won the 2008 World Series.

From 2005 to 2008, Ross was deputy police commissioner for internal affairs and gun control strategies, and in the past, he's also served as the commanding officer of the Homicide Unit, captain of the 14th District in Northwest Philadelphia and lieutenant of the Patrol Bureau of the 35th District in North Philadelphia.

At the news conference, Ross called Ramsey his "mentor" and said that he hopes to continue much of the work that Ramsey started. Ramsey was appointed head of the city's police force in 2008.

"It's not about re-inventing the wheel," said Ross. "It's about building upon it."

Ross fielded several questions on hot-button issues facing police, including body cameras for police officers, stop-and-frisk procedures and how he hopes the police will work with the community under his watch.

So far, a pilot program to outfit officers with body cameras is a success, and he believes the program will expand when he takes the reins of the department. On stop-and-frisk, Ross said he's going to work with his transition team to evaluate the procedure. Kenney, however, pledged during the campaign that he would end stop-and-frisk.

And, on the community, Ross couldn't have been more clear. He said he wants police to work closely with the community.

"If you don't have a partnership with the community, you're just not going to do it," he said.

Ross said he plans to continue police foot patrols throughout Philadelphia neighborhoods and plans to work with community groups and organizations throughout the city to strengthen the bond between police and residents.

"We are committed to improving the quality of life in this city," he said.

After the announcement, the mayor-elect said he considered several qualified candidates to replace Ramsey, though he wouldn't say how many. Kenney said what pushed Ross to the top of the list was his knowledge of the city and ability to unite people.

"I've known him for a long time," said Kenney, who noted that members of the NAACP and the FOP stood together behind Ross. "I think that says a lot about his ability to bring people together."

Asked what he'd like to see Ross focus on when he takes office, Kenney said the relationship between the public and the police is priority No. 1.

"We need to continue to improve our relationship with the community and the police," said Kenney. "I think we have to approach people in a respectful way, and that's how we get respect in the future."

Ross has won several awards in his career, including the Martin Luther King Award for Community Service, the Lucien Blackwell Award for Outstanding Service to the Community, the Four Chaplains Humanitarian Award and the American Police Hall of Fame Honor Award, Kenney's office noted.