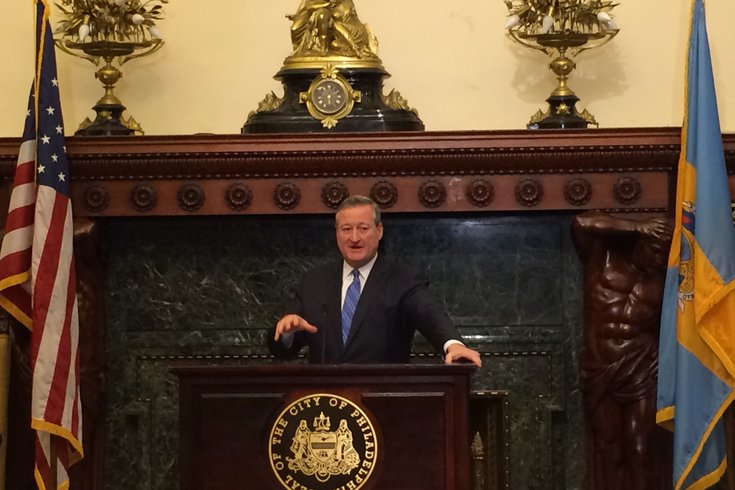 Mayor-Elect Jim Kenney announces the appointments of four individuals to his administration. All will take office when he officially becomes the city's mayor in January.

And, as he touted, the four individuals who will be the city's Pre-K Director, Chief Service Officer, the Director of the Mayor's Office of LGBT Affairs, and the Deputy Mayor for Public Engagement, will all be women.

"If you're going to get something done, might as well get a woman to do it," joked the Mayor-Elect during the announcement.

In detailing the experience that each holds in their individual field, Kenney said that with the appointments announce, he believes he has compiled a top-notch team for when he takes office.

"I think we really did a great job with this group," he said.

Kenney first introduced Dr. Nina Ahmad, who will serve as the Deputy Mayor for Public Engagement. According to Kenney's office, Ahmad -- a Bangladeshi-American, who was appointed as Chair of the Commission on Asian American Affairs under Mayor Michael Nutter -- will oversee the Mayor's commissions and offices on constituent-specific issues, such as, but not limited to, the Office of LGBT Affairs, the Office of Black Male Engagement, and the Youth Commission.

In saying she was excited about the new appointment, Ahmad said she hopes to bring "top-notch" community service to the citizens of Philadelphia.

"[We will] brand Philadelphia as the first-class city that it deserves to be," she said.

According to information provided by Kenney's office, Monahon has previously served as a field organizer for President Barack Obama for America and as a Regional Field Director in Pennsylvania for Obama for America, as well.

"I am so grateful for this incredible opportunity to serve the city of Philadelphia," Monahon said.

Kenney also announced that Nellie Fitzpatrick will continue to serve as Director of the Mayor's Office of LGBT Affairs, a position she has held since its creation this year.

Kenney's office noted that Fitzpatrick previously served in the Philadelphia District Attorney’s Office where she held several roles over the years.

In a brief address to the gathered audience, Fitzpatrick said she looks forward to continuing her work and applauded city voters for their hand in creating the Office of LGBT Affairs.

Finally, Kenney named Anne Gemmell, who has worked as the Southeast PA Field Director with the Pre-K for PA advocacy campaign at Public Citizens for Children and Youth, as the city's Pre-K Director.

This position will report to the Chief Education Officer, noted Kenney's office.

"I am thrilled at this opportunity," said Gemmell.

Kenny said officials are currently working to develop a pre-K program for city youth, saying that while funding will need to be sought to finance the program, he believes it will help not only give Philadelphia children the early education that is needed, but could also help employ Philadelphians within their own communities.

Also, he said, officials are in talks with area universities to help present a pre-K program, but just how this program will work, hasn't been finalized, he said.

"It's not just one cookie-cutter approach," Kenney said. "It's a lot of things."

The appointments go into effect when Kenney takes office in January.