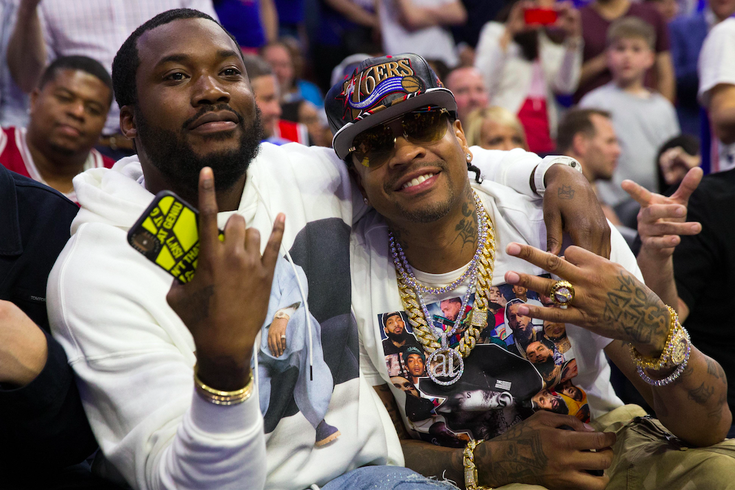 Meek Mill and Philadelphia 76ers great Allen Iverson pose for a photo during the 2019 NBA Playoffs. at Wells Fargo Center. The NBA Hall of Famer helped the Philadelphia rapper as he appealed a prison sentence in 2017, Sixers limited partner Michael Rubin said.

Meek Mill's reinvention as an artist and activist has given criminal justice reformers a tangible symbol of the potential within people who are stuck behind bars, many of them for reasons that are systemic rather than rooted in their characters.

Since his release from prison in April 2018, Meek Mill has released the hit album "Championships," committed himself to charity and taken an active role in multiple business ventures.

While many would argue Meek Mill never should have been jailed for probation violations, it's also clear that he experienced personal growth during his time in prison.

In a tweet Wednesday afternoon, the hip-hop artist said one of the most powerful moments he had in prison was watching a documentary about Allen Iverson.

I never told y’all I cried in my cell one night watching Allen Iverson documentary! 😂😂😭😭😭You should watch that if you a champion 🤲🏾

It's not clear which Iverson documentary Mill saw. The best-known doc, "No Crossover: The Trial of Allen Iverson," was a hit ESPN "30 for 30" production in 2010. Since then, there have been 2014's "Iverson" and 2016's "Allen Iverson: The Answer," an NBA Films production.

Iverson's case involving a brawl at a Virginia bowling alley in 1993, for which he was granted clemency after four months in prison, has several parallels with the court battle Mill faced in Philadelphia. Both men faced serious allegations that were poorly supported and yet threatened to destroy promising careers and livelihoods.

Iverson would end up assisting Mill while he was in prison. Sixers limited partner Michael Rubin said Iverson encouraged another family to come forward about similar damning conduct from the same Philadelphia judge overseeing Mill's case. During a retrial, the rapper eventually pleaded guilty to a single gun charge and had all others against him dropped.

Since Meek Mill's release, he and Iverson have appeared together at Sixers games and have bonded over similar experiences overcoming incarceration for questionable reasons.

And if you haven't seen any Allen Iverson documentaries, here's a look at all three.