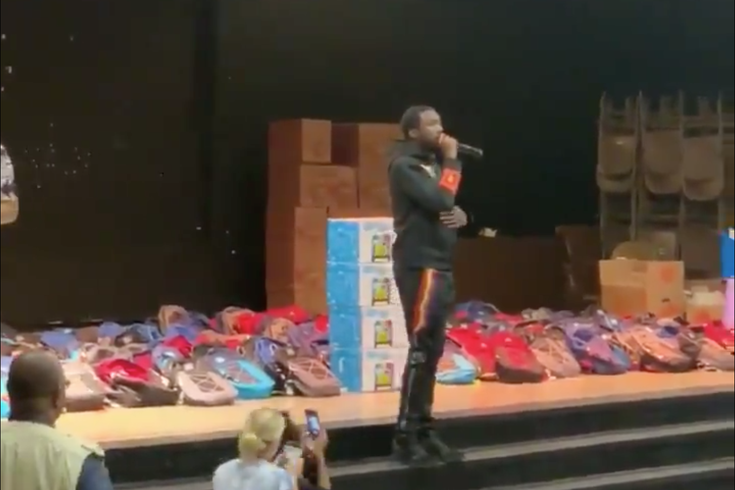 Mill, who attended the school when he was a child growing up in Philadelphia, tweeted Friday that he partnered with PUMA to provide backpacks and school supplies for every student at the school:

Got together with to @puma surprise students at James G. Blaine school. Every student at the school received a backpack and supplies pic.twitter.com/GmGfGJH4MI

As you might imagine, students were pretty excited to see one of Philly's most popular faces show up in their auditorium on a Friday in September:

It seems like Mill wants to make this a yearly thing: He did the same thing in August 2018, surprising students and brought roughly 6,000 backpacks to give to Blaine School students, as well as students throughout the School District of Philadelphia.

Last year, Mill said his upbringing, and his family's financial hardships when he was a child, made him want to give back to the school, and the families in the community.

"Those memories stay with me," Mill said last year, "and that’s why I’m committed to giving back to families in my hometown, putting smiles on kids’ faces and helping them start the school year on the right note with the right supplies."

Earlier this year, Mill saw his decade-long legal battle reach a conclusion after he pleaded guilty to a misdemeanor gun charge, and had all other charges against him dropped.

Since his release from prison last spring, Mill has spent much of his time advocating for criminal justice reform, working with legislators in Pennsylvania and founding the REFORM Alliance, which advocates for changes to state probation and parole laws across the United States.