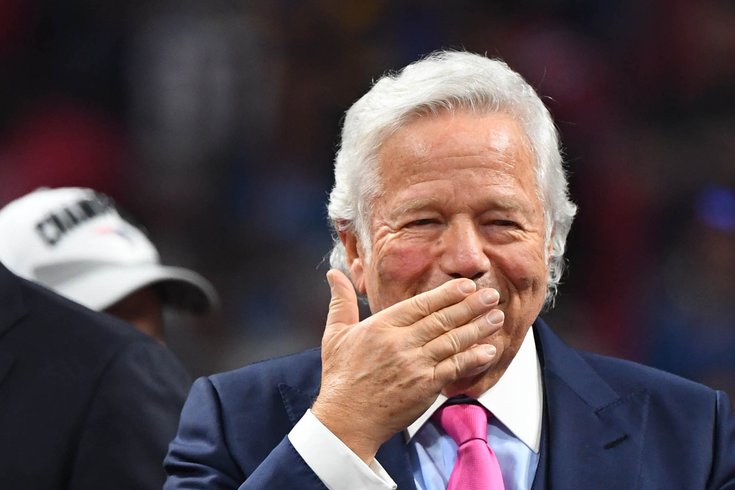 Robert Kraft, addressing the crowd after the Patriots beat the Rams in Super Bowl LIII.

The news came down Friday morning: New England Patriots billionaire owner Robert Kraft was charged with two misdemeanor counts of soliciting another to commit prostitution at a day spa in Jupiter, Florida:

Kraft’s charges are part of a bigger prostitution and sex trafficking sting, and he’s just one of 150 people caught up in the sting, according to police.

But his name, for now, is drawing the most eyeballs, and the most outlandish reactions.

How did the internet take the news? About as well as you might expect.

Let’s begin first with Meek Mill, who considers Kraft a good friend — Meek even gifted Kraft a chain after the Patriots’ most recent Super Bowl victory — and might have something to say about run-ins with law enforcement:

Three thinking face emojis is probably all we’re going to get from Meek right now, but it’s more than nothing, and it shows he’s watching. In January, Kraft, Meek Mill joined with Sixers owner Michael Rubin and CNN commentator Van Jones to to start The Reform Alliance, an organization dedicated to criminal justice reform.

Then, of course, there were the jokes about rings and everything else, including some Philly flair:

You think Robert Kraft was having fun? @LaneJohnson65 @Patriots

Robert Kraft showing up for his 5:30pm “massage” every Friday like: pic.twitter.com/pYVvlgLJmc

if you’re gonna foia that kraft video, i’m begging you not to.

Did Robert Kraft write a check?

BREAKING: Robert Kraft found not guilty as a result of the NFL’s new Tug Rule.

Eventually, President Donald Trump, who is also a friend of Kraft's, weighed in:

This is a weird story, and it seems like there’s plenty more left to learn, but it’s never a bad day when you can laugh at the Patriots.