The rappers' feud dates back months, but until last weekend it had taken place mostly virtually 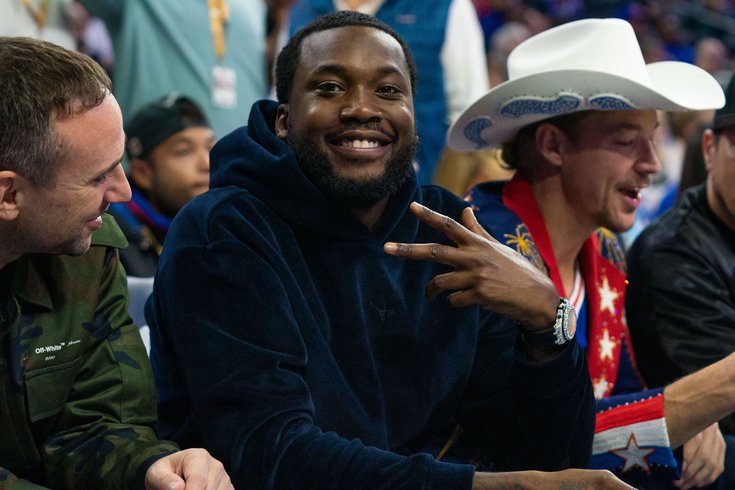 Meek Mill and rapper Tekashi 6ix9ine got into a heated argument early Sunday morning in the parking lot outside a club in Atlanta.

Meek Mill and rapper Tekashi 6ix9ine, who have been fighting virtually for months on social media, got into a heated argument early Sunday morning when the two finally met in person.

Mill, the 33-year old rapper-turned-activist-turned-actor from North Philly, and his 24-year-old Brooklyn rival collided in a parking lot outside an Atlanta club on Valentine's Day. The artists hurled insults at one another while being kept more than an arm's length apart by their respective security teams.

Both men later posted footage of the fight to social media.

Mill, whose real name is Robert Rihmeek Williams, accused 6ix9ine of trying to ambush him in the parking lot. 6ix9ine, who was born Daniel Hernandez, fought back, claiming that Mill "tried to spit on him," during the argument.

In the videos, Mill can be heard cursing at 6ix9ine, while the younger man retaliates by accusing Mill of employing a former cop to work as a part of the musician's security detail.

Those following the feud found this part to be especially ironic, since Mill's gripe with 6ix9ine stems from at least May 2020, when the Philly rapper criticized 6ix9ine for famously testifying against fellow New York gang members in court to earn himself get a shorter prison sentence.

Videos of the confrontation were reposted to the twitter account of popular hip-hop podcast network No Jumper here and here. (Warning, both videos contain explicit language.)

Fans on social media watched the early-morning Valentine's Day fiasco and quickly chose sides, and some Twitter users mocked Mill and Tekashi equally for their behavior.

I'm going to tell my kids that this was the "Meek Mill vs 6ix9ine" fight. pic.twitter.com/C9rSr3Of6K

this how Meek Mill and 6ix9ine were at the club 😂 pic.twitter.com/um3ssgXcn7

How 6ix9ine was when he was beefing with Meek Mill : pic.twitter.com/VQ3OJPITio

That whole 6ix9ine and Meek Mill incident with their phones in each other’s face: pic.twitter.com/y2WcjuWonk

So how do y’all pronounce it “garbage” or “6ix9ine”? I need answers. pic.twitter.com/0VBzj7tzvd