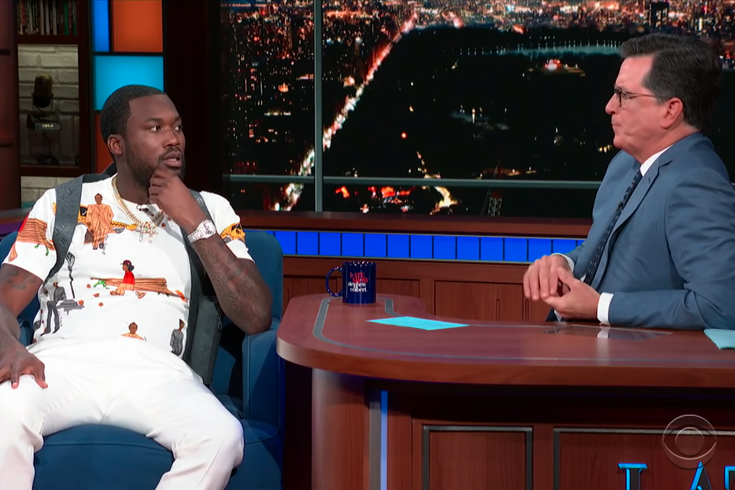 Meek Mill was on 'The Late Show with Stephen Colbert' to discuss his forthcoming documentary 'Free Meek,' his conviction being overturned, and his new record deal with Jay-Z.

Meek Mill made an appearance on Thursday's "Late Show with Stephen Colbert" ahead of the release of his Amazon documentary "Free Meek."

The Philly rapper discussed his probation and last week's ruling that Mill would be granted a new trial in front of a new judge in the 2008 drug and gun case that has kept him on probation for years.

LATEST: Meek Mill brought his son on stage at Philly club to freestyle

"Last week, they ruled for me to have a new trial to review the case that I was initially put on probation for," he told Colbert. "I got a label deal with Jay-Z the same day, I got the news the same day. I'm not a felon anymore, I'm not on probation anymore. It's looking great."

Last week, Jay-Z announced Meek would be at the helm of a new record label, Dream Chasers Records, in partnership with Roc Nation. And all this news comes just before the highly-anticipated Amazon docuseries "Free Meek" will be released on Aug. 9.

When Colbert asked if Meek felt, with the release of the series, that people have finally started to listen to his story, Mill said that there is so much access to information today and that is making it easier to educate people about criminal justice.

"People can focus and pay more attention," he said. "A lot of these things are common sense."

"Free Meek" will explore Meek's ongoing case and take a look at the rapper's activism in criminal justice reform.

"When I came home, I wanted to dedicate some of my time to give back to people who stood up for me," he said.