North Philadelphia native and hip-hop star Meek Mill came to the rescue of a young boy who attended his charity giveaway event on Christmas Eve.

The raffle event at the Martin Luther King, Jr. Recreation Center, a collaboration with Puma, GoPuff and Roc Nation, brought gifts to 3,000 local children. Meek Mill gave out more than 500 bikes and helmets, 400 pairs of sneakers and toys including Xbox, superhero figures, board games and school supplies.

Thank you @puma @gopuff @rocnation for making this all possible with me! 🏆🏆🏆🏆🏆 next year we do it bigger!

One unfortunate boy who attended the event nearly lost his gift as soon as he got it, according to The Blast.

In an Instagram story, Meek Mill said the boy was robbed soon after leaving the raffle. He returned to the event and Meek Mill give him another Xbox.

"They robbed him for his X-box soon as he left when they could of came and got one for free...he good now tho," Meek Mill captioned a photo of the boy. 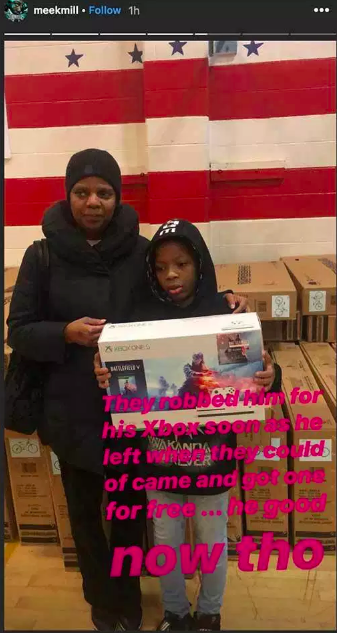 Since his release from prison, Meek Mill has remained an active voice in the movement for criminal justice reform. The rapper's latest album, "Championships," explores the social and cultural crisis of mass incarceration in the United States.


Toward the end of the event, Meek Mill's seven-year-old son, Rahmeek, was asked what he wants for Christmas. His answer? To see his dad get married.

Meek Mill asks his 7-year-old son, Rahmeek, what he wants for Christmas. Tells his dad he wants him to get married. WATCH: pic.twitter.com/MuZq0VoDcW

Meek Mill famously dated and split from Nicki Minaj before he was sent back to jail. Now 31 years old, it sounds like his son's words have made an impression on him.