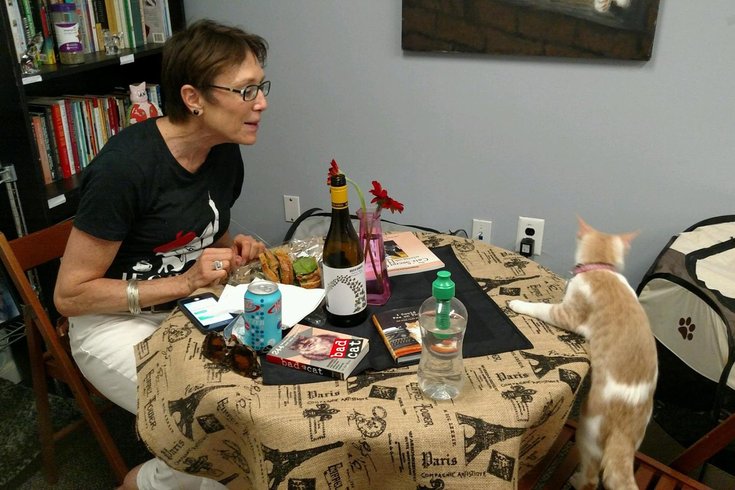 The cat-cafe concept first surfaced in Philadelphia last month when Kristin Eissler announced that she was scoping out locations for her Kawaii Kitty Cafe, then followed it up with an Indiegogo crowdfunding campaign that's currently about halfway to its goal. Now, Green Street Rescue founder Kathy Jordan told PhillyVoice that her Philadelphia-based rescue is planning its own cat cafe for next year.

What makes Le Cat Cafe unique, Jordan said, is that her organization -- founded in 2005 -- is a not-for-profit and rescues its own cats (Kawaii has partnered with PAWS). The cafe will be an extension of an organization that already exists.

"Our focus is on the cats and a better platform to get them adopted than store windows, the Internet, foster homes and adoption events that we are currently using," Jordan said. "The main objective of the cat cafe is not the coffee but the cats and the community awareness about all the stray cats on our streets who need homes and are very adoptable once they're cleaned up and vetted."

Cat cafes, she said, are a viable solution for getting cats not just out of cages but also out of foster homes that are sometimes overloaded with cats, overwhelming caregivers with responsibility.

But does the region really need another cat cafe? Yes, Jordan argues.

"There can’t be enough cat cafes – it’s not like, ‘Oh, there’s already one so there shouldn’t be two,’" Jordan said. "Japan has 150 – we could have 150 in the city of Philadelphia and still not have enough to get cats off the street. The more cat cafes, the better.”

Ed Fritz, operations director for ACCT Philly, told PhillyVoice that there are an estimated 382,000 stray, feral and free-roaming cats in the city. Jordan said she's rescued 281 since the year began but has only adopted out 93; she'd like the cat cafe to help boost that number.

Of note is that Jordan and her team of five volunteers have been chasing after the cat cafe concept for years. They were first inspired while waiting in line for two hours for a cat cafe pop-up that Purina launched in Manhattan in 2014, realizing the concept was more than feasible in Philadelphia. They tested that theory at last year's Petapalooza in Mt. Airy, taking over a community room at Weavers Way Co-op and serving coffee for patrons while three cats roamed freely.

After a successful first run, they came back for another pop-up cat cafe at this year's Petapalooza in June and hope to continue the tradition next year --regardless of how things shake out with their brick-and-mortar plans. 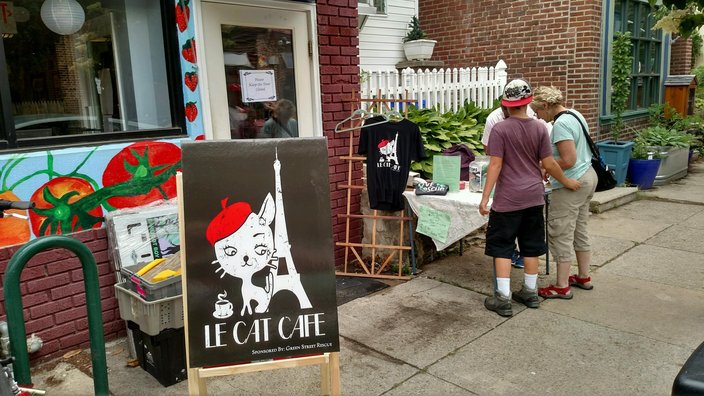 Still, the trouble is that Jordan and her crew currently face the same roadblocks as Kawaii: adequate funding and an ideal location. Jordan said she would need a space to be 1,200 square feet and able to support 12 cats -- the number she can legally keep inside without being considered a shelter.

She's also in need of partners for her Parisian-themed "BYOC" cafe concept.

"We are looking to network with a local coffee shop that is in close proximity to Le Cat Cafe," she said. "By keeping the coffee-making and purchases in a separate location, it frees up a lot of space for the cats and people and eliminates a lot of the L&I issues. ... The idea is to support the local community, local businesses and the local cat population waiting for homes. The more we adopt out, the more we can save on the streets."

The cafe would operate on an appointment-only basis, much like other cat cafes. There would also be a three-tiered membership program (bronze, silver, gold) that allows a certain number of hours for visitors each year. That option, she said, would be most attractive for cat-lovers who are partnered with someone who's allergic to cats, for students living in a dorm and renters with landlords who prohibit pets.

The cat cafe is a model that, Jordan said, has been proven time and time again -- pointing to cafes in Los Angeles, New York, Oakland, Calif., and Washington, D.C. as examples. Meow Parlour, now one of two cafes in New York, has adopted out 50 cats since it opened in December.

Jordan and her crew are also chock-full of ideas for how to fully take advantage of the concept, with hopes to use the space for a senior citizens visitation program, a literacy program that has kids reading to cats and a rotation of local art and music.

Green Street Rescue will seek funding later this month with the launch of its own Indiegogo campaign.