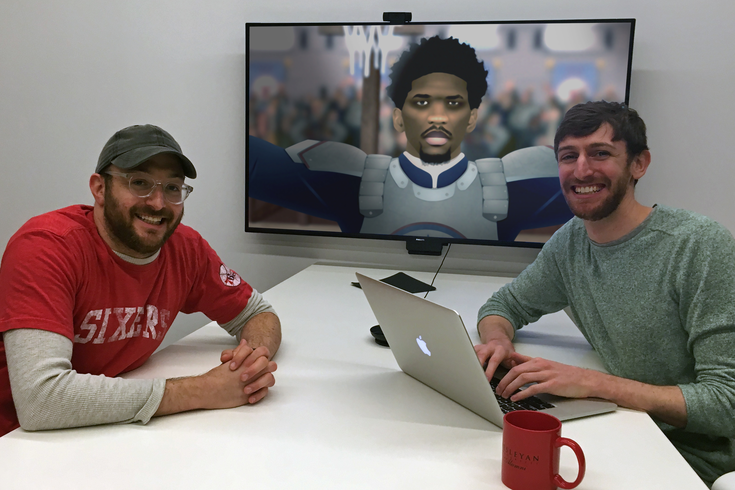 Growing up, Adam Malamut was more or less your typical all-in Philly sports fan. The Cherry Hill native listened to 610 every night, bled Eagles green, and most importantly to his current profession, was a big NBA fan during the Allen Iverson era.

Malamut admits that his interest in the Sixers waned after A.I. was traded (who can blame him?), but during that hiatus, he moved out to Los Angeles and taught himself how to animate. About seven years later, his interest in the Sixers has piqued again at the perfect time, as he now oversees Bleacher Report’s wildly popular web series “Game of Zones,” which he created with his younger brother Craig.

Now late in the show’s fourth season, the brothers are finally able to dedicate a whole episode of the series to the Sixers:

“The Process, the cult of Sam Hinkie was such a perfect ‘Game of Thrones’ parallel,” Adam said. “Just like the church of this guy, it felt right so we knew this was the season we wanted to get one in there.”

Obviously, there are some differences. Players don’t die that often or kill each other, and there’s not as much incest.

“We try not to show our bias too much, but this episode coming up, it will bleed through a little bit,” Craig said.

If you’ve ever seen one of the twelve “Game of Zones” episodes, one of the main characteristics is the show’s snarky humor. Whether the player or team is good or bad doesn’t particularly matter, as they will get roasted in one way or another. To strive for authenticity, Adam and Craig run ideas past the many basketball writers and fans also employed at the company.

(In fact, the Sixers were also utilized for the Kevin Durant free agency episode earlier this year.)

“A lot of what seems like us knowing a lot is really us pulling from the super organism brain that is here,” Adam said.

The Sixers “Game of Zones” episode won’t be the first Philly-centric animation that the brothers have made. When he was first learning how to animate, Adam made a cartoon during the Phillies heyday called “Baseball Friends,” which featured Ryan Howard and Chase Utley. This cartoon got some traction in the area:

That led to an opportunity for Adam to create a Yahoo web series called “Sports Friends,” which was largely based on the same concept. At that point, Craig, who is six years younger than Adam and was in grad school at the time, started to get involved with some background artwork. For the second season of "Sports Friends," Craig moved out to Los Angeles to work with Adam on the series.

“Craig was getting his masters in astrophysics while I was in Hollywood working on stupid cartoons, and somehow I pulled him away from astrophysics,” Adam said.

From there, Bleacher Report vice president of brand strategy Bennett Spector saw “Sports Friends” and asked the brothers if they could make a series for his company. They eventually came up with "Game of Zones."

“We’re huge ‘Game of Thrones’ fans, and we saw these parallels between the sports world, these shifting power structures and houses are like teams,” Craig said. “Obviously, there are some differences. Players don’t die that often or kill each other, and there’s not as much incest.”

They pitched the idea as an NFL show, but Spector pushed them toward the NBA, which looks like the right choice. The first episode of “Game of Zones” went viral, and since then, the Malamut brothers started working in-house for Bleacher Report.

“The personalities of the NBA are so great and then there’s are less people in the NBA,” Craig said. “So it’s easier to wrap your arms around it and understand the dynamics.”

The show has been so successful that Adam and Craig, who used to do all of the writing, animating, and voice work, now have storyboard artists, background artists, designers, animators, and more staff working on the project with them. The extra hands allow them to produce an episode in about six weeks.

And the result is that this year, “Game of Zones” has been blown out from three to eight episodes. Still, for Adam and Craig, one of the toughest challenges is staying topical and keeping up with the NBA season’s twists and turns once they have decided to make an episode.

For a couple of Process Trusters, there was no better example of a changing script than this Sixers season.

“We wrote this episode in January when things were going great,” Adam said. “Embiid was rocking and rolling, everything was good, we thought maybe Simmons was coming back. It was like everyone was so Process happy.

“And then Embiid got injured, Simmons’ timetable got changed, Nerlens got traded and everything kind of all fell apart, so we added a little ending that kind of felt like the feeling at that time.”