The former surgeon and celebrity doctor got Donald Trump's endorsement, but moderate voters may be the key to victory against Democrat John Fetterman 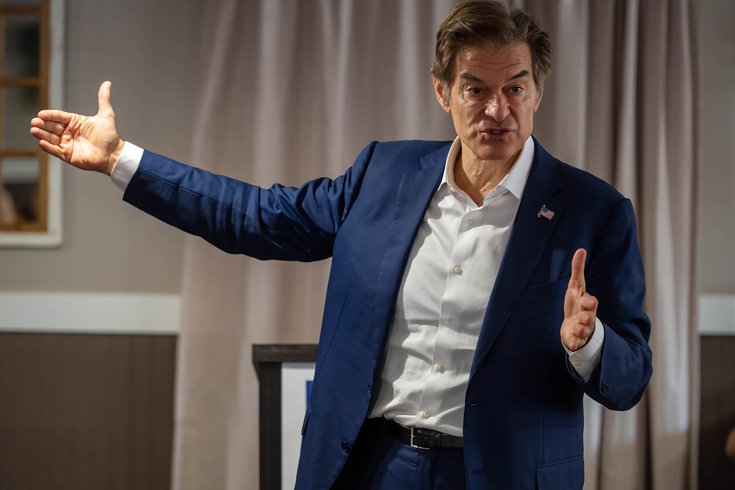 Republican U.S. Senate candidate Mehmet Oz speaks at an August campaign event in Wyoming, Pennsylvania. The surgeon and former TV host is in a tight race against Democrat John Fetterman.

In one of this year's most closely watched U.S. Senate races, Mehmet Oz has run a balancing act campaign to appeal to a wide spectrum of Republican voters in the perennial battleground state of Pennsylvania.

Oz, 62, is an accomplished heart surgeon who rose to national prominence as a health expert on Oprah Winfrey's daytime TV show. He later starred in his own program, "The Dr. Oz Show," which ran for more than a decade before Oz made his first foray into politics this year, hoping his celebrity cachet might help carry him to a win in November against Democrat John Fetterman.

RELATED: John Fetterman leans into his unconventional flare in run for U.S. Senate in Pennsylvania

The son of Turkish immigrants, Oz was raised in a secular Muslim household in Wilmington, Delaware, and holds dual citizenship in the United States and Turkey, where he also served in the Army during the 1980s. Oz attended Harvard as an undergraduate student and went on to receive his medical degree from the University of Pennsylvania, where he also earned an MBA from the prestigious Wharton School. He primarily practiced medicine in New York, receiving numerous awards during a career that propelled him into the limelight as a charismatic proponent of trendy health tips.

Questions about the depth of Oz's connections to Pennsylvania have followed him since he announced his run last year, leading to criticism of his loosely defined residency in the state, his wealth and his understanding of the needs of Pennsylvanians.

In June, Oz won a closely fought Republican primary election that came down to the wire against former hedge fund CEO David McCormick, who chose to concede instead of pressing forward with the automatic recount that was triggered by state election laws.

With a powerful endorsement from former President Donald Trump, Oz has crafted an image as a "conservative outsider" who can rally the Republican base that helped Trump carry the state in 2016. But as the election has drawn closer, Oz also has tried to temper his stances on issues that could tilt this year's election, including the landscape of abortion laws in the wake of the U.S. Supreme Court's overturning of Roe v. Wade.

"There should not be criminal penalties for doctors or women regarding abortion," Oz said in Philadelphia in September, clarifying how his pro-life stance will translate to his work in the Senate. Oz also has called abortion "murder," but said there should be exceptions in cases of rape or incest, or if the mother's life is at risk.

During a campaign that has been largely self-funded, Oz has spent millions of dollars on political ads that question Fetterman's stances on crime. He points frequently to Philadelphia's rising rate of violent crime as a way to discredit his opponent's reform-minded approach to criminal justice.

"Sanctuary cities, weak prosecutors, crime skyrocketing, failed liberal policies are making us less safe," said a narrator in Oz's first TV ad for the general election, a theme that has permeated his campaign strategy ever since.

But Oz's claims about Fetterman have drawn persistent scrutiny from critics, who see a pattern of distortion that also has cropped up regarding many of the medical treatments Oz promoted during his time as a TV host.

PENNSYLVANIA 2022 MIDTERM: Everything you need to know to vote in November's election

More broadly, Oz has attacked President Joe Biden's administration on the nation's struggles with inflation, calling for a focus on U.S. energy independence and curtailing trade with China in order to spur domestic economic growth. He generally has argued for fewer regulations on businesses, differing from Fetterman's open support for unions and higher wages for workers.

For much of the campaign, which has been marked by a war of political attack ads between the two candidates, Oz has trailed Fetterman in polls. By late September and into October, Oz's crime-centric campaign appeared to be cutting into Fetterman's lead, with the race listed as a toss-up by Real Clear Politics, which tracks an average of polling data.

In the home stretch of the race, Oz's fate could depend on whether he can court Pennsylvania's more moderate Republican voters and independents, who may give him enough support to close the gap with Fetterman. With a victory, Oz would keep the Senate seat in Republican control following the retirement of two-term Sen. Pat Toomey, joining Democrat Bob Casey in Washington, D.C., next January.