John Fetterman leans into his unconventional flare in run for U.S. Senate in Pennsylvania

The lieutenant governor and former mayor of Braddock is trying to bridge political lines and win over working-class voters in his race with Dr. Mehmet Oz 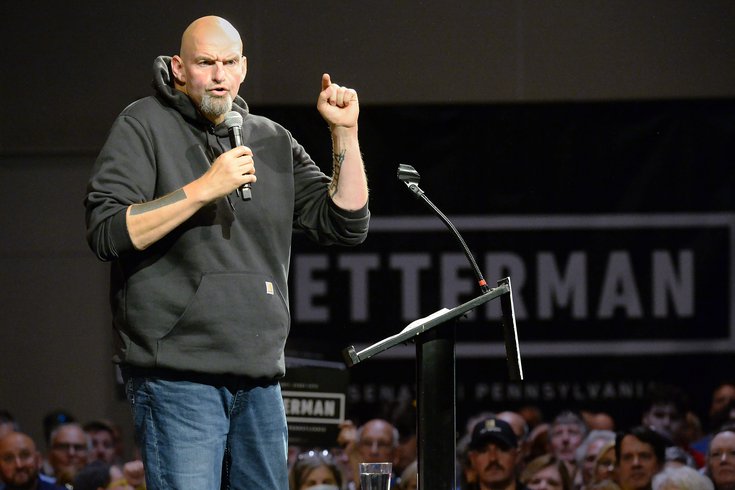 Democrat John Fetterman, above at a campaign event in Erie, is running against Republican Mehmet Oz for the open U.S. Senate seat in Pennsylvania.

John Fetterman has built a formidable political base on his outsider image and relatability, traits that have taken him from a lengthy tenure as mayor of small-town Braddock to office of Pennsylvania's lieutenant governor. Now he's banking on the same traits getting him to the U.S. Senate.

Fetterman, 53, previously campaigned for the Senate with a progressive platform in 2016, falling short behind more mainstream Democrats Katie McGinty and Joe Sestak. McGinty went on to lose to incumbent Republican Sen. Pat Toomey, whose pending retirement has opened the door for Fetterman to try again in 2022.

Fetterman has elevated his profile in the last six year — in Harrisburg, around the state and, more recently, nationally.  He cruised to victory in May's primary, despite suffering a stroke days before the election, setting up his race against retired surgeon and TV doctor Mehmet Oz, the Republican candidate, in what could be the most closely watched U.S. Senate contest in the country.

In an election that has clear stakes for the Senate, Fetterman's unconventional appeal and backstory have made him an intriguing personality for Democrats counting seats in the mid-terms.

At the same time, the Oz campaign and its supporter are trying to capitalize on Fetterman's limited political resume – especially for a candidate running for U.S. Senate – and that he is mostly unknown to many voters beyond his hoodies and tattoos. Both have resorted to attacking Fetterman's character and health.

Fetterman's campaign says he has "no work restrictions" since his stroke, based on the findings of his primary care physician.

Oz and his backers also have made assertions in ads about Fetterman's positions on criminal justice (determined to be "mostly false" by nonpartisan fact-checking site PolitiFact) and his encounter with an unarmed Black jogger in Braddock (which Politifact says are "mostly true" but need clarification).

Originally from York, Fetterman attended Albright College in Reading where he was an imposing, 6-foot-9-inch offensive lineman on the school's football team. His understanding of social issues grew from his time with the youth-mentoring, non-profit Big Brothers Big Sisters of America, where he was exposed to the struggles of working families. Fetterman later served in Americorps in Pittsburgh before earning a masters degree in public policy from Harvard University.

While Fetterman ran a GED program in the Rust Belt town of Braddock, about 22 miles southeast of Pittsburgh, some of his students encouraged him to run for mayor in 2005. He went on to serve as the town's mayor for 13 years, focusing much of his energy on new youth programs and job creation. His political origin story and staying power are often held up in national coverage as signs of unwavering support from his adopted community, but Fetterman has not been without his critics in Braddock, where some residents feel he's left a complicated legacy.

In his current Senate run, Fetterman has appealed broadly to working class people in Pennsylvania, even when it means deconstructing established political lines. In addition to his progressive base, Fetterman has courted disaffected voters who may otherwise be inclined to support the economic priorities of conservative-leaning candidates.

Fetterman has been a proponent of labor unions, voicing support for federal reforms that would make collective bargaining easier for workers and increase the minimum wage to $15. He's also made health care reform a pillar of his campaign, targeting out-of-pocket expenses and the high costs of prescriptions, as well as protecting access to abortions in Pennsylvania.

As lieutenant governor, Fetterman has taken a more visible and active approach to his job, which historically has been limited in scope. He toured Pennsylvania and spoke with communities about the legalization of recreational marijuana, a policy he's endorsed as a way to reduce prosecution for minor drug offenses and raise much-needed revenue for the state.

RELATED: Pennsylvania midterm 2022: Everything you need to know to vote in November's election

In a campaign that has featured intense and often outlandish ads from both sides, Fetterman has defended himself against Oz's portrayal that the Democrat is soft on crime.

"Dr. Oz lies about my record on crime," Fetterman said during a visit to Philadelphia this month. "Two of the things that I was most proud of in my career, stopping the gun violence as a mayor and fighting for the innocent and other individuals for a second chance. That is my record on crime. And that’s my commitment to fight for you in Philadelphia."

Meanwhile, in his own ads, Fetterman has raised questions about Oz's ties to Pennsylvania and his history of medical claims Oz made on his TV show.

For most of the campaign, Fetterman has led Oz in polls, but that gap has narrowed to less than 3 points as the Nov. 8 election draws near, according to an average of polls tracked by Real Clear Politics.

Much of Fetterman's campaign has been financed by donations of less than $200, which supports say shows the strength of his grassroots support — particularly among the state's younger voters. In a tight race, Fetterman will be relying on young people to hold back Oz's late push, which has captured a growing share of independent voters, older men and rural residents, according to AARP Pennsylvania polling data.