Lt. Gov. John Fetterman explains in blog post the significance of tattoos on his forearms

The Democrat who recently announced he's running for U.S. Senate in Pennsylvania says his ink comes from 'wrenching and personal experience' as Braddock's mayor 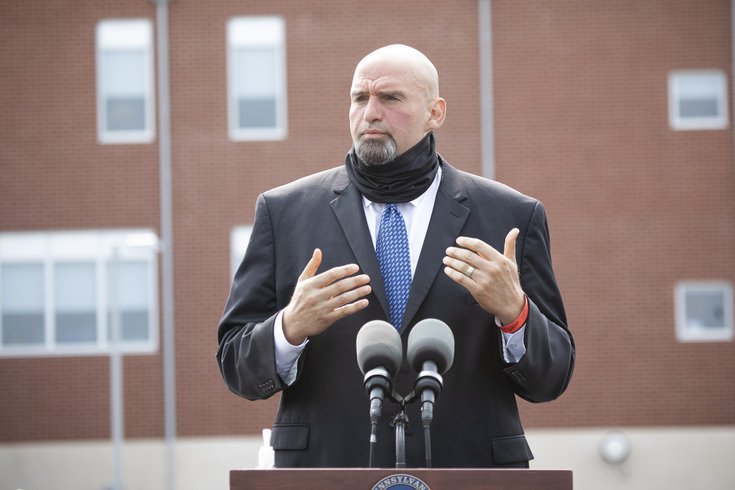 Pennsylvania Lieutenant Gov. John Fetterman gets a lot of attention for the tattoos on his arms. The 2022 U.S. Senate candidate says they are reminders of victims of gun violence in Braddock during his time as mayor of the small western Pennsylvania town.

Pennsylvania Lt. Gov. John Fetterman is a unique political figure, the type of person who epitomizes the idea that appearances can be misleading.

At 6 feet 9 inches tall and with tattoos on both of his arms, he's not the sort you'd expect to have a masters degree from Harvard and be running for a U.S. Senate seat in Pennsylvania in 2022.

But in a way, clearing up superficial assumptions works to Fetterman's advantage in politics. It encourages a broader abandonment of preconceptions about policy positions and who should be expected to support them, whether because of party affiliation or personal background.

Fetterman, formerly mayor of Braddock, a small town outside Pittsburgh, took to Medium this week to offer an explanation about the tattoos on his arms. He noticed that "John Fetterman tattoos" was Google's first autofill suggestion after typing his name. (One's suggested search query could be a lot worse: "Rick Santorum urban dictionary" still plagues the former senator on Google).

"I don't mean to look scary," Fetterman wrote Tuesday. "It's just kind of what I have to work with."

The tattoos, a series of numbers on each forearm, are representative of Fetterman's commitment to Braddock:

On my left arm I have the zip code 15104. That’s Braddock, Pennsylvania, my home and the community I was honored to serve as mayor for 15 years. My wife Gisele and I are raising our kids here in Braddock, right across the street from Andrew Carnegie’s first steel mill.

On my right arm, I have different dates. These are the dates when people were killed through violence in Braddock while I served as Mayor, starting in 2005. Seven out of nine were gun deaths. I actually have to get one more date added because in June of 2018, there was another tragic loss of life.

The first tattoo came in response to a 2006 shooting that took place during Fetterman's second week as mayor in Braddock. A pizza delivery driver was fatally shot and Fetterman was called to the scene.

"Every time Braddock lost someone was the worst feeling in the world," Fetterman wrote. "In a close-knit community like Braddock — which is home to around 2,000 people — it's very likely that you know the victim and their family. It's an incredibly wrenching and personal experience as a mayor, but nothing compared to what the families have to go through."

Fetterman has had to answer tough questions about his views on gun control. During his first Senate run in 2016, Fetterman was asked about a 2013 incident in which he pulled a shotgun on an unarmed jogger because he thought they were connected to gunfire that broke out in Braddock.

"It was a split-second decision to protect the community. If my brother had been running from the scene of 13 assault rounds, I’d have done the same thing," Fetterman said of the incident, which happened in the wake of the Sandy Hook shooting. "It was an emergency situation, an incredibly scary situation, thought it might be the last time I’d see my son."

In another Medium post in 2016, Fetterman outlined his position on gun control and protecting communities, including universal background checks, closure of loopholes and spurring federal research into gun violence as a public health crisis.

"Before you start thinking I'm just another Democrat who hates guns, you might be surprised to learn that for ten years, I have owned a Smith & Wesson Model 500. In fact, I've been around guns for most of my life," Fetterman wrote at the time. "It's not a radical statement: all of us should agree that we want to make sure that weapons stay out of the hands of people that could use them to hurt others."

In the midst of surging gun violence in Philadelphia and other Pennsylvania communities during the COVID-19 pandemic, gun control figures to take shape as a major issue in the 2022 Senate race.

Fetterman is among what is expected to be a long list of Democratic and Republican candidates who will vie for the open Senate seat as Pat Toomey declines to pursue a third term. Fellow Democrat Malcolm Kenyatta, a state representative from Philadelphia, already has announced he will run. State Rep. Sharif Street, the son of former Philadelphia Mayor John Street, also has launched an exploratory committee for a Senate run.

On the Republican side, Montgomery County real estate developer Jeff Bartos and Sean Gale, brother of Montgomery County Commissioner Joe Gale, have started their campaigns to for Senate in 2022. More are expected to join the race, from both parties, in the months ahead.

For Fetterman, his experience making Braddock a safer place to live remains a foundational piece of his aspirations — something he literally wears on his sleeves.

"My proudest moment as Mayor of Braddock is when our community went 5 ½ years without the loss of life due to gun violence," Fetterman said.