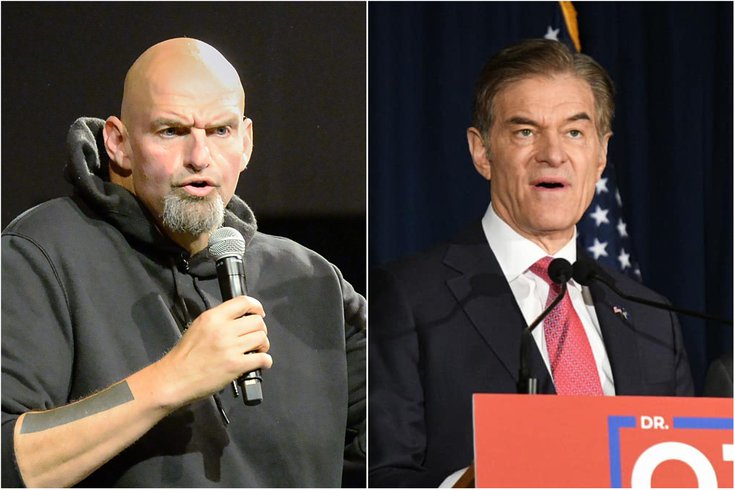 The Pennsylvania race for U.S. Senate between John Fetterman, left, and Mehmet Oz, right, features some of the most provocative and outlandish campaign ads in recent memory. Fetterman's latest attack includes billboards near the Philadelphia Eagles' stadium calling Oz a Dallas Cowboys fan.

Can we all take a minute to acknowledge how utterly insane the campaign ads have been in the U.S. Senate race between Democrat John Fetterman and Republican Mehmet Oz?

With less than a month remaining before the election, the onslaught of political ads is virtually impossible to escape. What separates the Fetterman-Oz race from others is that the ads show a greater degree of sophistication with meme culture, mimicking the styles that people of different political persuasions tend to lap up.

One anti-Fetterman ad, not directly from the Oz campaign, features a gruff, male voice bemoaning "liberal snowflakes" and the "blue-haired barista" who "wants her student loans paid for a gender studies degree."

That's a savage stereotype, hilariously specific and over-the-top, but it isn't much less crazy than Fetterman making a mash-up of clips from "The Simpsons," comparing the beloved cartoon's sleazy Dr. Nick character to Oz's history of hawking medical miracles. It's a form of shorthand for deeper reporting on the candidates, including the Washington Post's examination of Oz's past health claims.

Elsewhere, Oz has ridiculed "Freeloading Fetterman" for his upbringing and for receiving financial help from his parents into adulthood. This ad, which comes straight from Oz's campaign, includes a man crushing a Twinkie with his bare hand.

Fetterman's latest salvo is a pair of billboards on either side of I-95, just north of Lincoln Financial Field, that accuse Oz of being a Dallas Cowboys fan. The billboards will remain above the highway until after the undefeated Philadelphia Eagles face their bitter NFC East rival on "Sunday Night Football" this weekend.

Democratic U.S. Senate candidate John Fetterman has a pair of billboards on either side of I-95 in South Philadelphia. They call his Republican opponent, Mehmet Oz, a Dallas Cowboys fan.

In 2013, Oz once tweeted that he had auditioned for the Cowboys during a visit to AT&T Stadium, sharing a picture of him dunking a football over the crossbar of goal posts in the back of the end zone. The Fetterman campaign points out that Oz's allegiances also have hopped around to the New York Giants and Yankees, as well as the New England Patriots, in a pattern that fits his campaign's motif of painting Oz as a carpetbagger.

Doing my best to audition for the Cowboys while we have access to their facility during my 15 Minute Physical pic.twitter.com/phkVOGrq

"This gets to the heart of who this guy really is. He pretends to be a Cowboys fan when he's in Dallas, but now that he’s running for office he tailgates at Eagles games like he's a real Philly fan," Fetterman spokesperson Brendan McPhillips said in a campaign news release. "He has no core and no real beliefs. He's willing to sell out something as simple as his football rooting interest to benefit himself when he's in Texas, and he'd do the exact same thing on policy issues as a U.S. Senator. He's a fair weather Pennsylvanian at best, and we can't trust him to stick around and be on our side when it's not in his own self-interest."

Fetterman, of western Pennsylvania, is a Pittsburgh Steelers fan. His attempt to undermine Oz by appealing to Eagles fandom, one of the few things that unites everyone in the Philly region, isn't all that different in spirit from the tough guy yammering on about liberal snowflakes.

Very little of this back-and-forth trolling is about anything substantive. It's a matter of making it more "fun" to spend stupid money on leveraging subtle influence, especially in a political system that rewards airbrushing issues and bombarding people with small doses of negativity — even better if you laugh.

As wild as the mudslinging has gotten, the two candidates' dogfight race to take the Pennsylvania seat of departing GOP Sen. Pat Toomey is perhaps unsurprising when considering the stakes of the election and the backgrounds of the people involved.

Fetterman, going back to his Senate run in 2016, consistently has been cast as a hardcore political outsider, a former small-town mayor with a down-to-earth understanding of the issues that matter to regular people. From his imposing physical appearance and dressed-down attire to his unflinching marijuana advocacy and penchant for keeping it real, Fetterman's persona is built to be out of place with the den of wolves in Washington. That includes many Democrats who looked the other way during Fetterman's 2016 run, possibly because they felt less desperate and threatened at the time.

With a little bit of squinting, Fetterman sometimes has the feel of a much smarter, more serious version of Chris Farley's character in "Black Sheep," a movie that aptly fits the mood of this race.  (And speaking of "Saturday Night Live" alums, Oz got roasted on the show's latest "Weekend Update" over two of his most recent political landmines: resurfaced claims that his medical research killed more than 300 dogs, and a fundraising speech he gave at a museum Friday in front of a car once owned by Adolf Hitler).

With "celebrity TV doctor" on his resume, Oz naturally leans on misplaced confidence in his media savvy to help project the image of a polished conservative. He's more of a typical politician, in the mold of celebrities who have successfully done this before, except that Oz seems to believe the tastes of studio audiences and daytime TV watchers are basically the same as the sentiments of the voting public at large.

Oz's butchering of the supermarket name Wegmans, calling it "Wegners" in a clip highlighting inflation, follows the same script as any half-hearted consumer segment on a local news broadcast. Regardless of whether one supports Oz, there's almost a second-hand embarrassment and sympathy to be felt for him screwing these things up.

My grandfather once told me that crudité was his favorite thing to eat after a long, hard day in the steel mill pic.twitter.com/aZH9hrQ2L3

Last month, Oz attacked Fetterman's attire, suggesting that his hoodie and shorts combo has a "deeper meaning" that "when he dresses like that, he's kicking authority in the balls." Some people have construed that as a compliment.

Most of Oz's focus has been hammering Fetterman on issues related to crime and criminal justice, a strategy that seems to be biting into Fetterman's lead in the race. Despite the criticism from the Fetterman campaign and others, who call these ads deceptive, Oz believes voters will side with him on the issues.

"Pennsylvanians do not care where you're from. They care what you stand for. I proved that in the primary," Oz told WGAL when asked about his critics. "It's evident in all of the homework that we do. The average Pennsylvanian is not concerned about residency. They're really worried about inflation and energy prices, and the crime that they're witnessing in cities. Those are the issues they're going to vote on in November."

The Fetterman campaign and its supporting PACs have made exposing dishonesty a huge part of their attack strategy, even calling Oz "The Wizard of Lies" in a spot that reviews his past medical claims, much like "The Simpsons" ad.

"The other side realizes they can't make anybody like them, so what they are trying to do is lie and force people to not like me," Fetterman told MSNBC last week. He's been especially bothered by Oz's remarks about his health following the stroke he suffered before the Democratic primary earlier this year, prompting a larger debate about the influence of ablism on coverage of the race.

An average of polls tracked by RealClearPolitics shows Fetterman with a 3.7-percentage point lead over Oz as of the end of September, the most recent period when polling data was included. That's about half of the lead Fetterman had in mid-August.

It might just be that the race between Fetterman and Oz is a prime example of the evolution of entertainment politics swept in by former President Donald Trump, whose campaign events have often appeared more like attempts at stand-up comedy. This particular contest features two candidates who have an unusual flair for weaponizing their personalities, for better or for worse.

One thing is for sure: it will be must-see TV when Fetterman and Oz face off in their lone debate on Oct. 25 in Harrisburg.